The problem, of course, is tagging everything. This will be an interesting project.

Kate Bush's "Cloudbusting", first released as a single in 1985, is another one of her brilliantly dense songs from the Hounds Of Love era in the mid-1990s. At one level it's an exploration of the theories of psychoanalyst Wilhelm Reich, his belief that all life possessed orgone energy which could be manipulated to save lives and change the weather, and his eventual suppression by the American state. At another level it's an exploration of the relationship between child and parent as seen from the child's perspective. At still another level, it's a brilliant video featuring Donald Sutherland. "Cloudbusting" is a bit too stately for my tastes and isn't one of my favourite songs by Kate Bush, but it's still a good song.

But every time it rains,
You're here in my head,
Like the sun coming out--
Ooh, I just know that something good is going to happen.
And I don't know when,
But just saying it could even make it happen.

The Utah Saints' 1992 British hit single "Something Good" is built around a sample of Kate's voice, the line "Ooh, I just know that something good is going to happen." Part of the efflorescence of house music in the late Thatcher and early Major eras, the first big hit singles of the Utah Saints did feature vocal samples taken from the previous decade of British hit singers. I can't speak as to what has been done with these other songs, but Kate Bush's vocals the Utah Saints make just another sample, the "Ooh, I" portion reduced to a level almost as abstract as any synthesized melody. They've been likened to the KLF, and when I listened to the KLF and their album The White Room I noticed them playing with the same sort of abstraction at the level of their total performance.

I'm not sure about the artistic merits of "Something Good," if only because of the great yawning gap between that song and "Cloudbusting." The beats are quicker, the song's opened by guitar, crowd noise is spliced in, the song seems to get faster and faster as it speeds towards its end 3m29s after it began. I do know that I like it. There's something sublime about its simplicity, I'm sure.

This discussion thread started on rec.arts.sf.science by our very own Douglas Muir, discussing the problems likely to be faced on recently terraformed worlds, merits reading. Green Mars isn't necessarily going to be all that habitable.

The first that I'd heard of Scarborough was in Laurie Brown's Success Without College, wherein she called the communtiy of her childhood "Scarberia" and suggested that its monotonous suburban sameness played a critical role in her decision to join Toronto's post-punk music scene. The first that I'd heard of Scarborough rapid transit was in an article in the Toronto Star suggesting that the system had run its course and needed to be put down somehow, anyhow. I've been curious about this system--apparently an orphaned technology, a dead-end in the field of mass transit--for a while, and yesterday I'd nothing to do, so I decided to go.

I hadn't disembarked into the Kennedy TTC station before, and even though

larkvi warned me ahead of time I wasn't prepared for the draftiness. As we ascended to the top level of the complex, the reasons for the cold wind became apparent when I saw that the rapid transit level was basically a wind tunnel, entirely exposed to the air. The site of the actual Bombardier Advanced Rapid Transit train itself took me aback. I was reminded of the 1980s, and not necessarily in a good way. I kept thinking of my venerable Commodore 64, and of the Lego cities that I built as a child. 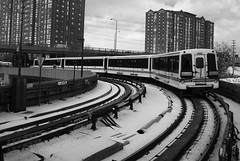 The aesthetics were off. Even though the RT cars are only half as wide as subway cars, inside they look like TTC vehicles with the standard upholstery and signage. From the outside, they're a bit blocky and a bit unfashionably coloured; on the inside, too, I could feel snow flakes force their way through the too-quickly-closing doors. Neither of us was very surprised that this is an orphaned technology, with plans to replace the line with conventional streetcars or to extend the subway further east or to do other things (throw more buses at the problem, say). It's a pity that this didn't work out.

We disembarked at the Scarborough Centre stop, and left the station. Turning south, we went past some featureless office towers framing a sort of blue basilica skeleton that faced, indirectly, upon the former city hall and the wind-swept square before it. Turning back to the north before my fingers snapped off, we entered the Scarborough Town Centre shopping mall. It's a big shopping mall, to be sure, but still a shopping mall. The Scarborough Historical Society had set up some booths on the lower level, advertising aerial photos on sale for five dollars each amidst placards and posters of Scarborough's history. The photos were dramatic enough with their time-lapsed portrayals of rampant urban growth and the historical information reminiscent of things I've read back on the Island, but I was left with the distinct impression that Scarborough's rural past was utterly irrelevant to this urbanized and suburbanized present.

In retrospect I might have liked to explore more of Scarborough, but we decided to head west. A minor comedy ensued when

larkvi took a picture of me entering a rapid transit car, I turned to face him as I got in, and the doors slammed shut. I got off at the next station and waited for him, but, alas, chatting on the telephone I missedhim, getting in one car just as he got off and moving a station ahead. On the plus side, we got some fresh air, training if you would for the effort we made when we got out of the subway stop at Warden to try to get to a nature trail we'd seen heading east earlier that day. On the map below, W represents the Warden Station, while P represents the park and the red arrows trace our direction. 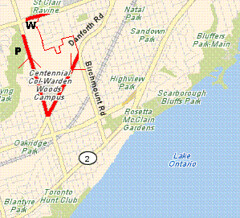 It would have been a good idea for me to have taken a map, I think.

The temperature made me wish I'd been a good Canadian and brought some gloves and a hat; but then, as

larkvi pointed out, up above was a beautiful sky. 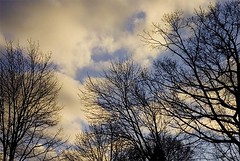 larkvi's photos are available here, on my Flickr page.

Ellen Himelfarb's profile of David Furnish, Elton John's partner, is worth reading if only for its quick biography of a man who forms the other half of a power couple interesting because of their open homosexuality.

Heather Pringle's 2006 The Master Plan: Himmler's Scholars and the Holocaust is the sort of book that makes one want to laugh in horror. Pringle's pleasant if conventional journalistic style does nothing at all to disguise the horror that she feels on discovering the full extent of the activities of the Ahnenerbe, the SS' occult research ministry. Starting off from the theosophy and kindred New Age movements which were popular in early 20th century Germany, Pringle demonstrates convincingly that the Ahnenerbe went on to take these theories, rooted in beliefs of deeply-hidden conspiracies and long-forgotten similarities and secret bloodlines, and make them the central justifications for major Nazi goals including the Holocaust and the planned colonization of central and eastern Europe.

The intellectual speciousness of the Ahnenerbe's arguments--arguing by deduction and by inference whenever it pleased them, or simply making up theories wholesale like (say) an ancient populous Gothic empire in Crimea--is astounding. It's difficult to believe that a modern state was willing to support research institutions which claimed, among other things, that Germans were the last pure descendants of Aryan Atlantis, that Tiahaunaco in South America was an ancient German city, and that the entire universe was made out of ice and that we were on our seventh Moon, the previous six having crashed into the Earth and melted into the oceans. But then, when I read translated memoranda which happily say that, with Operation Barbarossa, Nazi phrenologists will be at last able to overcome the shortage of Jewish skulls that bedevilled them, and how some researchers hoped to use human sacrifice to tap ancient mystic energies for great weapons like Thor's lightning bolts, I stopped disbelieving. Among other things, it turns out that the Nazis were criminally stupid and credulous besides being prototypical pulp science-fiction villains. That, and the willingness to use any specious reasoning and no specious reasoning at all, explains their entire ideology.

The Master Plan deserves to be widely read. It astonishes me that more hasn't been generally known of the Ahnenerbe. One reason why that story hasn't resonated before now might, perhaps, lie in the prevalence of all those same root sources of Nazi ideology in our own culture, in the popularity of books like The Da Vinci Code which purport to explain the modern world as product of vast ancient conspiracies and in the revolts against reason and science and rational behaviour. Often there's even a direct link between the 1920s and our time, as in Graham Hancock's writings. Can you see a potential problem here, too?

The Newfie joke is, to my mind, one of the least reputable corners of Canadian humour. The Newfie joke is the standard sort of ethnic-stereotyping joke, with the story making fun of Newfoundlanders' stupidit, venality, uncontrolled and/or naive sexuality, and the like. The motives? It's the standard mockery of the poor, really, especially of the poor who speak oddly and come from distant lands of which we know nothing. Even Maritimers try to maintain a certain distance from our neighbours, distinguishing carefully between "the Maritimes" (New Brunswick, Nova Scotia, Prince Edward Island) and "Atlantic Canada" (the Maritimes along with Newfoundland and Labrador). Despite Newfoundland's increasingly prestigious position as an exporter of culture--humour, television shows, music--the jokes are still told, if perhaps not as often as they used to be.

Newfoundland was poor before Confederation, only in the 1990s after the collapse of the cod fishery were natural resources discovered, like the iron ore of Voisey's Bay, and known resources like the Hibernia offshore oil and gas fields expanded. These discoveries and their exploitation has led to a much needed economic boom characterized by the fastest economic growth in Canada. It will take some time to translate this economic growth into generally improvd living standards, especially given the capital-intensive but employment-light nature of these growth industries, but sooner or later the lag will end. As per my prediction at the Head Heeb, Newfoundland might become like Iceland just another absurdly wealthy resource-rich North Atlantic island nation.

Will the Newfie joke still be told when--perhaps more appropriately if, perhaps--Newfoundland becomes the richest province in Canada? I suspect that it will. Money can't automatically buy respect, especially if you're perceived as nouveau-riche. Take a look at Alberta's stereotyped identification, in central and eastern Canada, with retrograde conservatism and selfishness. Canada's interprovincial hatreds are enduring.

An exchange made while a few of us were watching In The Beginning, the Babylon 5 TV movie covering the Earth-Minbari War.

acrabtree: "So, Sheridan really is like Captain Kirk, but with less sex and more violence."

Eh. It sounded good at the time.