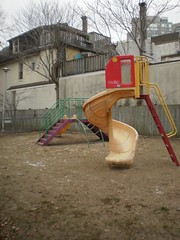 Christmas morning, 2009, in the Dundonald Street Parkette
Originally uploaded by rfmcdpei
The playground in the Dundonald Street Parkette in downtown Toronto, just north of the Wellesley subway station and west of Yonge Street, was a grey, wet place on Christmas morning, rimes of frost clinging to the sandy ground that still had some green shoots of grass.

Rex's blog posting at Savage Minds about culture shock speaks not only to the discipline of anthropology--my second undergraduate major, as it happens--but to everyone, really, who's encountering with and engaging another culture. Sitting and proclaiming that you're taken aback by these strange people with their strange ways isn't very productive.

The downsides of making anthropology necessarily a culture-crossing encounter are legion. It reifies the notion of cultural boundaries, for instance, driving us further away from the Boasian recognition of culture’s fluid nature. It makes people who study themselves a tremendous problem, rather than recognizing that such a thing is perfectly natural—whether it be ethnographies of white urban first worlders, or Native anthropologists who are Taking The Theory Back. In so narrowly imagining the field as rich whites visiting poor browns, it reduces an ethics of connectivity (thanks for this phrase James Faubion) to an impoverished series of debates about how best activist anthropologist can help those poor, poor people. And, of course, saying that it is the culture shock rather than fieldwork and participant-observation that gives anthropologist insights is, implicitly, a vote of no confidence in our methods. Our discipline is worse off, I believe, when we claim that our method amounts to ‘hanging out’ but that’s ok because we hang out in ‘really strange places’.

Other cultures can't be taken in passively as objects of oddness; other cultures have to be actively engaged with. Culture shock can't be a cul-de-sac, but one stage of several in ethnography or, well, life, really.

The discussion in the extensive comments is also worth reading.

Consider the below, cross-posted post, to be free advertisement for Outside the Lines. Want to read future posts? Follow my future links.

Thinking about this blog, it struck me that the Pet Shop Boys' 1993 song "I wouldn't normally do this kind of thing" would be a perfect theme for this blog.

As one fan wrote, the song's genesis came when Tennant and Lowe realized that something new was happening in their lives.

A short, simple, yet highly melodic piano-driven song that celebrates the exhilaration one feels at falling deeply in love, maybe for the first time. It's also superbly structured with its parallel verses, each prompting the listener to ask a question, which the narrator is then pleased to answer. Succinct, with not a moment wasted, the original Very album version is an absolute gem.

Actually, the song's genesis has nothing to do with being in love. Neil was embarking on a day trip from London to Edinburgh, and on his way via taxi to Heathrow Airport he thought to himself, "I wouldn't normally do this kind of thing"—that is, fly from one place to another and back in a single day. He couldn't get the phrase out of his head, and it soon evolved into a song. He and Chris created the demo for it in the studio the very next day.

That sort of desire for experimentation, that sort of willingness to ask questions of ourselves and find out the answers, that willingness to embrace the joys coming from change--that's what this blog's about.

Believe me, I'll have more later. For now, enjoy the music.

Markets get everywhere, the New York Times' Marc Lacey writes, even in a cuba that not only represses markets but tries to strictly control the Internet. Craigslist's model clearly works.

These are tough economic times in Cuba, and while the black market has always bustled here it seems particularly intense these days, with enterprising Cubans in a constant search of compatriots who have money to spend.

There are no classified advertisements in the Communist Party newspaper Granma or the other state-run publications that circulate in Cuba. Rather, sales are made through Radio Bemba, which is not a radio station at all but the country’s extensive gossip network, which takes its name from the Spanish word for lip.

Two Cubans in their 20s who left the island for Spain have created a way to make all this secretive selling easier. It is a type of Cuban Craigslist, which allows the small but growing number of Cubans with access to computers and the Internet to buy and sell with less sneaking around.

But the authorities, despite loosening restrictions recently on the sale of computers, have repeatedly blocked access to their Web site, Revolico, whose name means commotion. One of the programmers who created the site (www.revolico.com) said in an e-mail message that he and the co-founder were in a constant scramble to get their site past government censors.

“We chose the name to make an allusion to the disorder that we are trying to organize,” said the programmer, who spoke on the condition of anonymity so that his relatives still on the island would not encounter problems with the Cuban authorities.

Although he said that Craigslist was the inspiration for Revolico, the Cuban site is designed to upload more quickly on the island’s sluggish connection speeds. And although some of the categories on the site — cars for sale, computers for sale, boys seeking girls, boys seeking boys, for instance — are identical to those on Craigslist, there are many particularly Cuban exchanges.

Take the person selling his place in the visa line at the Spanish Embassy to someone trying to leave the island. Or the arranged marriages that are offered to help Cubans find a way to another country.

Or all the classic cars, like a 1950 Dodge, a 1956 Chevy or a 1954 Buick, all still running after having been cobbled together with makeshift parts for more than half a century.

The acronym "BRIC' stands for Brazil, Russia, India, and China, four very large low- and middle-income countries home to hundreds (or thousands) of millions of people, with demicontinent-size landmasses and economies to match that--so we're told--will determine the economic future of the world thanks to their strong growth. The Korea Times' Kim Tae-gyu writes that Russia's flagging economy is expected to take it out of this elite category. Its replacement?

If BICI takes the place of BRIC, Indonesia would replace Russia on the list of economic super powers in the waiting.

``Russia has seen its growth rate slow down of late while Indonesia is expected to enjoy a growth rate of higher than 6 percent per annum through 2014. With a population of up to 240 million, the country will surface in the global scene,'' the HRI said in its report.

``China, India and Brazil are expected to rack up robust economic expansion down the road. Considering the surge of Indonesia, we think that BICI will replace BRIC in 2010.''

I'd say that this is more than symbolic, representing not only a further downgrading of Russia's importance but a recognition that Indonesia is definitely an active player in the world. How can it not be, with its position and its location and its resources and its people and its increasingly stable democratic governance?

One thing that I picked up from

In spite of the large body of writing on yall, we know very little about the form. For example, we know almost nothing about its social and spatial distribution (i.e., about precisely who uses the form and exactly where it is used) and very little about its origins or even its precise meaning. This paradox is largely a consequence of the peculiar research strategy that underlies a great deal of the literature on yall. Rather than basing their conclusions on surveys of usage or ethnographic studies or even attestations in literary dialect, most of those who have written on yall rely on what is best termed the personal testimony of true believers. Especially in response to skeptics who cite apparent singular uses of you-all or yall that they may have overheard by chance, true believers simply give their personal testimony that these forms never occur as singulars in the South. They often do so with zeal, as in Axley's assertion that, in a lifetime of observation, he had "never heard any person of any degree of education or station in life use the expression you all as a singular" (1927, 343). Even Atwood (1962), in an otherwise excellent dialect survey, relies on the strategy of personal testimony. Although he surveyed the use of yall as a plural in Texas and Oklahoma, Atwood did not investigate its possible occurrence as a singular; he merely asserted that the form could not be used as a singular, adding that "if anything is likely to lead to another Civil War, it is the Northerner's accusation that Southerners use you all to refer to only one person" (1962, 69). In fact, only one study (Richardson 1984) provides anything like systematic evidence on the possible use of yall as a singular (she argues that the form is used only as a plural and that apparent singular occurrences usually reflect Southerners' exaggeration of their dialect for social effect); few studies provide any data at all on the social and spatial distribution of the form, either singular or plural. A century of fervent scholarship on you-all and yall, then, has produced mostly fervor.

[Singular yall] is used by native Southerners, especially those who live in areas with large numbers of non-Southerners or who are in contact with non-Southerners in their work, as a badge of local identity, that is, as a way of affirming local values in the face of widespread migration into the area by outsiders who (often unwittingly) pose a threat to local values.

Thoughts? I still use it occasionally as a plural, since, well, y'all know it fills a gap in standard English as it's used.

I've a post up at Demography Matters touching on the growing migration of Russians from the Russian Far East to northeastern China, and the ways in which this counterintuitive movement proves that common knowledge about population can actually be quite wrong and must be checked against the facts. Go, read.
Collapse