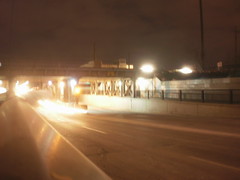 Looking south at the rail track above Dupont and Dovercourt
Originally uploaded by rfmcdpei
I think I might like the night's potential for photography. The question is whether it likes me (and, my camera).

China, it turns out, can't realistically be held to account for much of its coal's impact on the environment, Wired Science's Alexis Madrigal reports.

A seam of coal formed 250 million years ago during the worst extinction event on record appears to be responsible for the anomalously high lung cancer death rates among women in the rural Chinese county of Xuan Wei in Yunnan Province.

It’s long been known that the lung cancer mortality rates in the region were the worst in the world among female nonsmokers and some anomaly in the coal had been suspected. Lung cancer mortality in the region is up to 20 times the Chinese average. But it’s only in recent years that scientists have focused in on silica in the form of very fine quartz as the mineral that makes burning the stuff so deadly.

Now, in a paper published in December in Environmental Science and Technology, Chinese, British and American researchers have proposed a link between the silica in the coal and the massive event that nearly wiped out life at the Permian-Triassic boundary.

“What we’re saying is that the geologic and climatic events that nearly extinguished life 250 million years ago is still having an impact because its imprint is in the coals that the people are using,” said Bob Finkelman, a geologist at the University of Texas, Dallas. “They are inhaling this material with nanoquartz that was precipitated 250 million years ago and in a sense it’s extinguishing life in the community.”

“Even when you look at coal from a small region, there’s enough variation in the properties that you can’t just call it all coal and expect it to have the same health effects when you burn it,” said Donald Lucas, a physical chemist at Lawrence Berkeley National Laboratory. Lucas co-authored a paper on the nanoquartz in Xuan Wei’s coal with geologist Linwei Tian of Chinese University of Hong Kong who did pioneering work on the subject.

What Finkelman’s work provides is a plausible account of why this particular coal may be enriched with silica. While there are several hypotheses for what caused the mass die-off at the Permian-Triassic boundary 250 million years ago, a major volcanic episode is likely to have contributed to the phenomenon. Massive amounts of gases leaving Siberian basalts are believed to have radically altered the geochemistry of the atmosphere.

“It lead to highly acidic rain which denuded life on the surface of the earth and acidified the rivers and the oceans,” Finkelman explained. “It was so intense that they believe it actually dissolved a lot of the rocks on the surface, mobilizing the silica.”

Here in Canada, residents of the very isolated eastern Québec mining town of Sept-Iles are very hostile to the idea of opening up uranium exploration in their hinterland, regardless of economic benefits.

The Quebec government has a duty to put a stop to plans for uranium exploration in the Sept-Îles region because of the overwhelming opposition of residents, the citys mayor, Serge Lévesque, said Tuesday.

Lévesque was reacting to the release of a poll ordered by municipal officials last month after two dozen local doctors threatened to resign if B.C.-based Terra Ventures Inc. goes ahead with planned drilling in the area.

According to the poll, 91 per cent of the 1002 Sept-Îles residents queried about the question of uranium exploration said they were opposed to the idea.

Of those opposed to the project, 79 per cent said they were concerned about the negative impact on health and the dangers linked to radioactivity.

How much of this fear is realistic, I wonder?

It looks like so many Roma are fleeing Hungary for Canada that the Canadian government may impose visas for visitors from Hungary, too, just after Canada did the same thing with the Czech Republic.

The number of refugee claims from Hungary has soared since last spring, according to data collected by the Immigration and Refugee Board. That's despite months of attempts by Hungarian and Canadian officials to find other ways to better manage the influx.

Numbers began to rise after Canada lifted visa requirements in the spring of 2008, when Hungary joined the European Union. Since the spring of 2009, however, the steady increase turned into a flood.

But he added that efforts to collaborate had not produced concrete results. "Thus far, unfortunately, the number has gone up."

Now, the Eastern European country is among the top three sources of refugee claimants. The number of claims made every month was usually between 20 and 40 immediately after the visa requirement was lifted in the spring of 2008. By the fall of 2009, the monthly total was about 200.

While numbers for the last three months of the year have not yet been made public, they are expected to show another sharp increase.

At the same time, the refugee board's approvals of the claims have plunged to zero, with many of the claimants withdrawing or abandoning their applications as they come up for processing.

The Globe and Mail's John Ibbitson is unimpressed with Canada's democracy, the proroguing of Parliament being just another step down the path towards something Bad.

It is a small symptom of a grave condition. Our Parliament has become the most dysfunctional in the English-speaking world, weaker and more irrelevant than the U.S. Congress or the parliaments of Britain, Australia or New Zealand.

If Britain is the mother of Parliaments, her Canadian daughter is a fallen woman. Government MPs are cowed; parliamentary committees are too often irrelevant. Three consecutive minority governments haven't strengthened the powers of the House to hold the government to account; instead, they've encouraged new methods by which the Prime Minister's Office seeks to centralize authority.

Canadian MPs cower at the hands of the party whips, and parliamentary investigations are so ineffectual that the only hope of getting to the bottom of anything is to pressure a prime minister into calling a public inquiry.

British MPs are considerably more autonomous than their Canadian counterparts – ironically, because there are so many of them. The British House of Commons (barely) holds 646 MPs, compared with the 308 in the Canadian House. There are typically around 23 ministers in a British cabinet, compared with the 38 in the current Canadian cabinet.

The general consensus seems to be that Smitherman is the leading candidate for mayor of Toronto.

Ontario's former deputy premier George Smitherman laced up Friday for what could turn out to be the toughest game of his life - scoring the mayor's seat in Canada's most populous city.

The mercurial politician, known for being the province's first openly gay cabinet minister and self-described Liberal "attack poodle," signed up as a candidate in Toronto's mayoral race before heading out for a skate in front of city hall.

"It's about energy and it's about my ability to perform well on slippery surfaces," he said.

Skilfully dodging specifics about his "platform for action" - including how he plans to reduce Toronto's staggering $2.5-billion debt - Smitherman would only promise to make job creation his first priority as mayor.

"Over the course of this campaign, I'm going to bring what I brought to public life so far: a level of energy and a capacity to be a transformative figure and to move policy files along," he said before donning his hockey skates.

Smitherman, a trucker's son who grew up in Toronto's west end, has good reason to be jovial. His biggest competition and former political foe John Tory - who came a close second to current mayor David Miller in the 2003 election - bowed out of the race Thursday after mulling a bid for months.