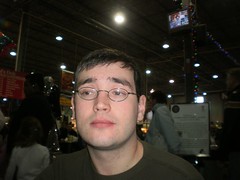 Me at Pickering by Jerry
Originally uploaded by rfmcdpei
Here I am! Jerry took this photo at the Pickering flea market some Sundays ago.

Today, the 14th of January, is my 30th birthday. It'll be a nice day, I think, and I' m amused that I share my birthday with Yukio Mishima.

Today's not a regime for insanely-planned military coups, thankfully, just another bright warm winter day in Toronto. Any suggestions as to appropriate non-coup birthday activities?

I've a post up at Outside the Lines talking about why I don't believe in resolutions: they're just too abrupt. Slow change, now, is where it's at.

Yukio Mishima stands out in my mind for the spectacular manner of his death, his decision to commit seppuku with the help of his lover after his ludicrous attempt at a military coup failed. Sun and Steel, partially available in the Google Books archive, is regularly cited as a text explaining the rationale behind that suicidal gesture, as rooted in his desire for a transcendent physical perfection that surpassed empty intellectualism, as noted by this article in the GLBTQ encyclopedia.

The motive and process of remaking himself into his ideal is depicted in Sun and Steel (1968). This book manifested Mishima's abhorrence of Japanese intellectuals [. . .], whose overevaluation of intelligence made them conceited, physically unattractive armchair theorists. He praised muscular beauty, which became synonymous with action in his aestheticism. Muscle and action were the antitheses of what a sedentary and meditative writer would embody.

Thus, by placing muscle, action, and beauty (and by extension, warrior and masculinity) in the same category, he emphasized their superiority to intelligence and language (writer and femininity). Gazing at his Greek-godlike body, Mishima felt his transition from man of language to man of muscle to be a rebirth of himself, who used to be a "grotesque old man of twenty-five years of age," as he wrote in "Watashi no henreki jidai" ("My Wandering Years") in 1964.

Dennis Michelian's extended essay on the book goes into further detail on Mishima's philosophy as expressed in the book.

During the last month of his life Yukio Mishima had an exhibit of his literary career at a department store in Tokyo.Mishima organized the exhibit by using the metaphor of four rivers of his life.The rivers were called "writing", "theater", "body", and "action". The first two "rivers" dealt with Mishima's career as a novelist and a playwright. The "river of the body" dealt with Mishima's passion for bodybuilding and how that activity changed his awareness of his earlier life. The last river "the river of action" dealt with Mishima's awareness as a "warrior" and his desire to become a "man of action". Mishima believed that the river of body and the river of action flowed into one another.The two are strongly connected in the book "Sun and Steel". Throughout the book Mishima talks about how the act of physical training created in him a distaste for words and the corrosive effect that words had had on him. According to Mishima that when a man related to the outside world solely through "the body" all men became exactly alike because their bodies were designed to do the same exact thing.Mishima wrote in "Sun and Steel" that the male body by its very nature exists in a form that rejects existence and that this is a universal experience amongst all men(page 11 Sun and Steel). Throughout "Sun and Steel" Mishima professed a strong desire to finally be just like other men. He felt the need to discard the sensibility that had compelled him to write many of his earlier works such as "Confessions of a Mask" because in these works he set himself apart from other men and had been contaminated by the corrosive power of words.

A recurrent idea that surfaces again and again in "Sun and Steel" is the corrosive power that words had been able to exercise over Yukio Mishima's during his earlier earlier life. Mishima confesses in "Sun and Steel" that he was aware of words before he was aware of "the flesh" and that the awareness of the flesh would only come many years later. One of the reasons given by Mishima for this situation in "Sun and Steel" is that words were a replacement for the physical body that he had always wanted to have. The ideal of heroic beauty had always eluded him and that is why he pursued the beauty of words instead.But according to Mishima the ideal that a beauty of words seeks to recreate is at best an imitation of the real world, where the beauty of the hero's body is the real thing. Throughout most of his life Mishima refused to understand that the world of the body and the world of words were interwined. Mishima recounts in "Sun and Steel" that it wasn't until 1952 when he was traveling abroad on the deck of a ship that he started to percieve himself as a physical being made of flesh for the first time. He was in his mid thirties at the time and already one of Japan's most celebrated writers. This incident would shape the direction of his life for next ten years.

Shorthly after 1966 Mishima found the origins of his "plan for life" in an old samurai practice known as "Bunburyodo"."Bunburyodo",which translates into "the dual way of literature and the sword" is the process by which samarai were expected to cultivate both the martial and literary arts in equal proportion. In reality most samurai were unable to live up to this rigorous goal, but it was considered the cultural ideal. Mishima's had a very specific idea of what his form of "bunburyodo" would be.He focused much of his attention and energies on finishing his long literary project , the four book set "The Sea of Fertility". In 1966 the book's first volume was still being written. With every stage that his literary project "Sea of Fertility" moved closer to completion, Mishima equally sought ways to realize his ultimate goal of "dying as a warrior" or as a "fighting man". In the autumn of 1966, Mishima completed "Spring Snow",book one of the "Sea of Fertility" series. Shortly afterward he applied for permission to begin training at one of the Japan's military bases. Mishima began training at the base in 1967 the same year that his private army was formed. He had finally begun the military part of his "plan for life".

My take? Mishima's actually onto something. I like Mishima's emphasis on the physical, actually, since I'm not a fan of Cartesian dualism and am aware, and have become increasingly aware, of the fact that my consciousness and my life experiences are determined by my body and its relation to the world. Without the flesh, life would be impossible. It's also true that language, written or spoken, can't perfectly communicate a lived reality but can only approximate it, that without telepathy no one can get into the head of another person. Sit mens sana in corpore sano. This is the first Mishima work I've read and I therefore can't compare it to other works of his, but I like the Hemingwayesque nature of his prose. Whether because of the skill of his translator or because of the underlying strengths of Mishima's original Japanese text, I can really penetrate this prose without feeling, as with too many other translations, as if my gaze as a reader is being blocked, glancing off of an impenetrable barrier.

My major problem with Sun and Steel is with Mishima's denigration of language. Human consciousness might be determined entirely by the framework of the human body--substantially, if you believe in the soul--but it's also defined by language and language's sequelae, like culture. Without language, and the sense of the existence of other people and of their consciousnesses that's intimately associated with language, humans would be no different from baboons or chimpanzees. Saying that humanity's defined by its physicality is one thing; saying that language is meaningless because it's imperfect is quite another. In the end, if life is nothing but a series of beau gestes, if language is corrosive of one's true self and of one's intimate relationship with other men (note that he denigrates the feminine), what's left of one's humanity? Mishima's reduction of human beings to simple primates thus undoes his philosophy.

Read Sun and Steel for the language and the insights on humanity's relationship to the physical. Just don't take Mishima's nihilistic take on human existence seriously. We're all people in our own imperfect ways; trying to create a human community by annihilating our differences is just silly.
Collapse