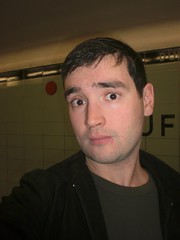 Me, without glasses, in Dufferin Station
Originally uploaded by rfmcdpei
I've worn glasses for 26 years, and was curious to see what I looked like without them.

(Yes, I've the eyes-wide-open-in-terror look. All I can say is that it looks substantially better than my old passport photo.)

I've a post up at Demography Matters describing the dynamics behind emigration from Haiti and their likely prospects in this catastrophic era.

Personal Reflection's Jim Belshaw had some meditations about blogging

There seems no doubt that many bloggers simply replicate material from the mainstream media, sometimes without attribution and without any real value added. This, to my mind, is plain wrong. That said, the relationship between blogging and other new media and the conventional media is far more symbiotic than the conventional media sometimes allows.

The conventional media itself happily uses Twitter, social media sites such as Facebook and blogs as sources of information and not just on fast breaking events. Further, the new media also plays a role in directing traffic to specific stories and sites.

In writing in a blog environment I do not claim to be a reporter, although I do report.

Like all bloggers, I use the conventional media as a source of stories. Interestingly, I very rarely use the TV news services as an information source. Australia's ABC isn't bad, although when you drop to local or regional level the on-line stuff is so scant as to be almost useless from my perspective. CNN and BBC are far worse than the ABC. Al Jazeera's English language service sometimes has material that others miss, but the limited nature of coverage means that a weekly check of the site is generally all that is required.

To some degree, the print media itself has moved away from reporting into commentary. Here bloggers are at least as good and sometimes better.

As examples of bloggers providing commentary, he cites Canadians who need explain just what the prorogation of Parliament is and why it's important, and also suggests that Australians could share their own experiences with their version of the Westminister model.

Belshaw makes excellent points. Most of the posts I've been making here are [LINK] posts, made simply because I don't have the time necessary to comment on something but want to share it nonetheless. My Friday blogosphere [LINK] post is a perfect example of that. I do try to generate content, on some days more than other days, but do I do it enough? I'm honestly not sure. Time's a factor, clearly, but I'm also afraid--overafraid?--of writing something that others could object to, whether on factual grounds or because of the rhetoric I use or because of the ethics the post is based on. The key to better blogging on my part, I suppose, is a more measured boldness. Will I pull this off? We'll see.

I'm rather unimpressed. Leaving aside the arrogance of demanding that a trading bloc allow the import of a product its citizens find offensive, the idea of protecting a traditional practice just because its traditional is a perfect example of a tautology. Besides, isn't China supposed to be a promising market?

Inuit groups in Canada and Greenland are taking the European Union to court over its import ban on products derived from the seal hunt.

The lawsuit, announced Wednesday in Ottawa, aims to overturn the ban adopted by 27 European countries last year. The court documents have been filed in the European General Court, the first level of the EU's court system.

The coalition of groups involved in the lawsuit includes the Canadian Inuit organization Inuit Tapiriit Kanatami and the Inuit Circumpolar Council in Greenland and several Inuit individuals from both countries.

"I suppose the best alternative would be for the EU not to have adopted this legislation, but that ship has sailed," Inuit Tapiriit Kanatami president Mary Simon told CBC News on Wednesday.

"We are seizing the moment and we've gone to court."

The EU's trade ban includes a partial exemption for seal products from Inuit sealers, but the Inuit groups say the terms of the exemption are not clear.

"It doesn't explain at all what they mean by an exemption," Simon said.

Simon also argued that since Inuit have been hunting seals for food, clothing and trade for many generations, the idea of Europeans banning their product is "cultural bias" at best.

Strains of mutant HIV emerging in the U.S. and Europe threaten to undermine progress made in expanding access to treatment in poor countries, a study published online by the journal Science found.

About 60 percent of drug-resistant HIV strains circulating in San Francisco can spur self-sustaining epidemics as patients who haven’t been treated spread them, researchers from the University of California, Los Angeles said in the study. Similar trends are emerging in other rich cities including New York, Chicago and London, said Sally Blower, a professor of mathematical biology, who led the research.

Mutant strains are already starting to spread in poorer nations such as South Africa, where there is little access to back-up medicines when resistance develops, Blower said. Newer treatments will likely curb the spread of drug-resistant HIV in San Francisco and other wealthy cities, where patients have better access to alternative treatments, she said.

“If the resistant strains we have identified in our analyses evolve in these countries, they could significantly compromise HIV treatment programs,” Blower and colleagues wrote. Mutant forms “pose a great and immediate threat to global public health,” they said.

The study casts doubt on research by World Health Organization experts published last year that predicted testing everyone for HIV in hard-hit African countries and treating all infections immediately may eliminate most of the virus’s spread. That model, known as “test and treat,” is flawed because it doesn’t take drug resistance into account, Blower said in a telephone interview.

Huh. I might have seen something very different tonight at the corner of Bathurst and Bloor Street West had things gone differently, it turns out.

Firefighters were called to the Honest Ed's discount store (at the corner of Bloor and Bathurst Streets) just after midnight.

A fire had broken out in the storefront window but emergency crews were able to put it out within minutes.

Authorities say there is limited damage to the store as the fire was contained to the window display.

A Toronto police officer said since the building is so old, it's fortunate the damage wasn't worse.

According to the store's website, Honest Ed's opened about 62 years ago.

"Because the building is so old, it could have gone up like a matchstick," the unidentified officer said. "But the quick work of firefighters likely saved it."

A fire could have also devastated Mirvish Village, a small cluster of art studios, galleries, boutiques and cafes surrounding the 15,000-square-metre store.

Jerrold at blogTO has more.
Collapse