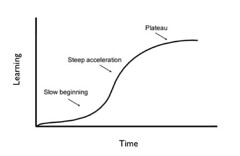 Learning curve, as illustrated by David McDaniel
Originally uploaded by rfmcdpei
I was struck by an observation that Stephen made about scientific progress and its limits.

Each scientific and technological progressive step depends on other scientific knowledge and technological knowhow. For a society with very little real knowledge of how the universe works, their potential is limited - it's like the Bible says, to those who have, more will be given and for those who have not, even what little they have will be taken away. So in the beginning, progress occurs but is very slow and most people experience the universe as a static place, or for the most enlightened, of a very long, slow arc of progress.

However, just like the titration curve, as knowledge builds up, it begins to reach a critical mass and key discoveries are made, where the knowledge that exists begins to support the rapid accumulation of even more knowledge. As the rate of progress speeds up, everyone can perceive it, but the dominant paradigm is to imagine progress as a linear process. So someone writing science fiction in such a time would tend in envisage the progress to travel through space, for example, as taking centuries, and the lifestyle envisioned often seems to have a curiously archaic sensibility to modern eyes.

Then as knowledge builds ever quicker, we reach the equivalence point of our titration curve of progress. To the enlightened, the exponential nature of progress is obvious, and to those inclined to revere science, the day when humanity will be literally transformed by the capabilities of science seems like it is just around the corner. Science fiction writers working in such a time might be tempted to "overshoot," and make predictions about specific times, for example our own decade, that seem extremely exotic compared to the comparatively very prosaic reality we actually inhabit.

What I think happens next is that due to the fundamental limitations of science and technology, progress then begins to slow. New discoveries, and significant improvements to existing technologies continue to occur, but progress is increasingly dominated by refinements to existing science and technology rather than radical new discoveries. As the process of refinement approaches theoretical maxima, the overall rate of progress slows. Progress seems linear again, not exponential.

The titration curve is very similar to the learning curve pictured at left. If, as Stephen goes on to write, we really have found out the basic principles of the universe by the early 21st century, say, then the scientific progress that would follow would involve mainly tidying-up obscure areas not quite adeqwuately investigated. If our models are wrong--if physicists discovered that it was entirely possible to determine a particle's exact position and momentum at the same instant and thus that the Heisenberg principle was incorrect--science might embark on another S-curve of discovery. "If." Past a certain point, scientific research might become mainly an applied field something like engineering, examining what would happen when object X encountered force Y and how to ensure that object X would hold up better.

What do you think?
Collapse