Over at his blog, Johnny Pez writes about an interesting short story from the early 1930s that makes the case for technocracy.

Depression were a year and a half in the past, and the economic crisis had been growing steadily worse ever since. Bank panics had grown increasingly common, unemployment had risen to 15.9 percent, and shantytowns called Hoovervilles had appeared in every city, populated by people who had lost their homes and had nowhere else to go. A government dominated by pro-business Republicans was helpless to address the situation, cutting spending in a counterproductive effort to balance the federal budget, and clinging to the gold standard.

A year earlier, [science fiction writer Harl] Vincent had written "Gray Denim", a story in which he introduced his stratified world of a purple-clad elite ruling over gray-clad masses. In that simple and rather improbable adventure story, Karl Krassin, who has been raised to believe himself a member of the gray masses, discovers that he is the heir to the throne of the Continental Empire, a state that rules all of Europe, Asia, and Africa. In the end, he turns his back on the Empire, and returns to New York to rejoin the gray-clad workers. In stark contrast, when Scott Terris, the protagonist of "Power", has a chance to gain political power, he grabs at it with both hands and refuses to let go.

Much fiction includes an element of wish-fulfillment fantasy, and this is certainly true of science fiction. "Power", though, is an example of political wish-fulfillment. Unlike the politicians of 1931 who seemed stunned in the face of catastrophe, Scott Terris acts boldly and decisively, and completely transforms his society is less than three months. Terris' dictatorship proves immensely popular, to the point where Gail Destinn, the proponent of democracy, admits in the end that Terris' actions were necessary.

The technocracy movement aimed to replace democratic oversight of public policy--only so far as necessary, of course--with rule by a scientfically trained elite that would maximize a society's efficiency so as to ensure the highest possible standard of living. This Canadian website makes the case.

Technocracy is not a form of government. Governments are organizations designed to produce laws with the intention of controlling its citizens to some extent. Technocracy is instead a method of control of technology. It outlines the basic operating characteristics for a high-energy, abundance-producing society. Some areas may simulate social control, but instead of enforcing laws to achieve this, Technocracy instead is designed to provide an environment that will facilitate behavior conducive to this operating environment. People will have as much personal freedom, or likely even more, than in any modern democratic society. The technical controls of Technocracy are not interested or designed to interfere in people's lives, only instead to provide the best standard of living with which people can enjoy life.

This sort of planning was quite popular in the 1930s, when it seemed like the free market's failure was irrevocable and that governments needed to intervene in order to maintain an adequate standard of living. Again, I turn to the Canadian website.

If technocracy ever did become established in North America, I can easily seeing it slip into totalitarianism. Leaving aside the possibility of the movement acquiring an interest in the social sciences, the amount of control and the certainty of the need for such control intrinsic to the movement would lend itself readily to the full range of totalitarian atrocities. Totalitarianisms have all claimed that they can remake the world for the better of their favoured subjects, but have all failed to one extent or another: the Nazis gave Germany the frontiers of the 11th and 12th centuries, the Soviet Union poisoned or starved the ecologies of Eurasia, and Mussolini didn't even make Italy's trains run on time. Mission creep's nasty. 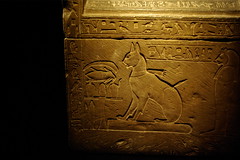 Le prince qui aimait son chat
Originally uploaded by Larazoni
While visiting the Art Gallery of Ontario's King Tut exhibition with Jerry today, I happened upon this sarcophagus, dedicated by Crown Prince Thutmose of the eighteenth dynasty to his cat Ta-Miu (She-Cat).

This cat's coffin, possibly a canopic box (Reisner and Abd-Ul-Rahman 1967: 392), reflects the few indicators we have of the ancient Egyptians' love of cats. Crown Prince Thutmose, the eldest son of Amenhotep III, had this coffin duly prepared for his pet cat upon her death. Her name was apparently "tA-miAt", meaning "The Cat (feminine)." As a means of shorthand, many Egyptologists render the cat's name as either "Ta-Miaut" or "The She-Cat." Here, both terms are used.

As the hieroglyphic inscriptions on the sarcophagus demonstrates, Thutmose loved his cat.

Prince Thutmose's sentiment for The She-Cat is evidenced by the series of supplications by various deities to care for the animal in the afterlife, but the initial opening lines of the inscription appear to acknowledge the cat's justification and eventual deification in the afterlife was a given, just as with human deceased. At times, The She-Cat is referred to as male in the supplications of various deities, which is not unknown even in female human burials of the New Kingdom as well. The glyphs read:

Words spoken by Osiris, Ta-Miaut
I bristle before the Sky, and its parts that are upon (it).
I myself am placed among the imperishable ones that are in the Sky,
(For) I am Ta-Miaut, the Triumphant.

A full translation of all of the text is available here in PDF format.

The whole exhibition is impressive and highly-recommended, a well-organized display of statuary and jewellery and household artifacts and gold, so much of the gold that was the skin of the ancient Egyptians' golds. This one sarcophagus stands out for me as artifact from a famously cat-loving and cat-worshipping civilization, proof that the attitudes of some of its ancients are akin to mine, more evidence that this civilization isn't all that different from mine.

My previous post highlighted a minor ideology of 1930s North America, technocracy, that never quite managed to break through into mainstream North American politics. Any number of ideologies have been left to drift into the purview of historians interested in obscurities, or missed because they're highly contingent on local circumstances. It's not a coincidence, for instance, that the first generation of West Germans born after the Second World War often took to a particularly extreme left-wing radicalism--the Rote Armee Facktion's not that distinct in that regard--motivated in part by the fact that their parents actually did work for a genocidal and imperialistic regime with remnants visible in contemporary West German society. Modern Québec society, separatist-leaning or otherwise, is concerned with becoming and remaining a prosperous modern Francophone society, in reaction to a more conservative and insular past. In the Baltic States, support for membership in the European Union was rooted to the desire of Balts (not so much Baltic Russians) to be firmly embeddded in a benign multinational federation embodying the ideals they aspired to.

In some societies, actively practiced religion inspires movements, in others the legacies of religions practiced in the breach do, in many conflicts between religions and sects of religions determine the local political environment. Trotskyites, Hindutva activists, Pattani Malay separatists, Crimean Tatar revivalists, German Christian Democrats, immigrant political machines in multicultural Toronto: all of these particular movements and groups can trace their origins to fairly specific milieus in fairly self-explanatory histories.

There's not that much new here in Toronto, honestly, with a superannuated social democracy contending with left-of-centre and right-of-centre political movements and so manifesting in disputes over public spending and transport corridors, all in a fairly benign environment that has marginalized extremists of one type or another. It's boring, I guess. What's going on in your part of the world?

I'd written earlier about the "Highway of Heroes,", the stretch of Ontario's Highway 401 that links CFB Trenton--the Canadian military base where Canada's Afghanistan war dead return to their country--with Toronto, where Ontario's chief coroner investigates at his office's headquarters on 26 Grenville Street just west of Yonge. (Torontoist features an interesting 2006 interview with former Chief Coroner Barry McLellan on his office and its roles.) Last Sunday, Jerry and I were walking north across Wellesley Street alongside Church, in the heart of the gay village, when we saw the police prepare Wellesley Street for the passage of the latest coffin with its cortège of police and other official vehicles. Some pictures were taken. 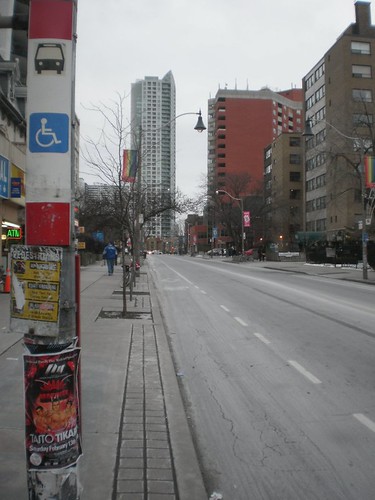 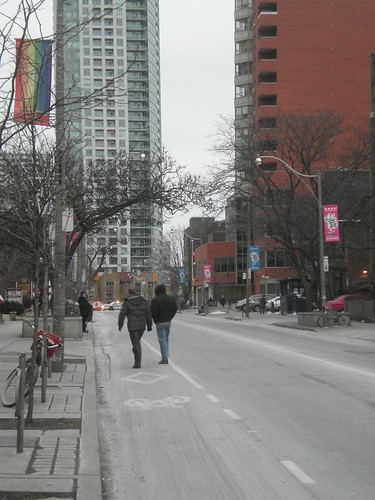 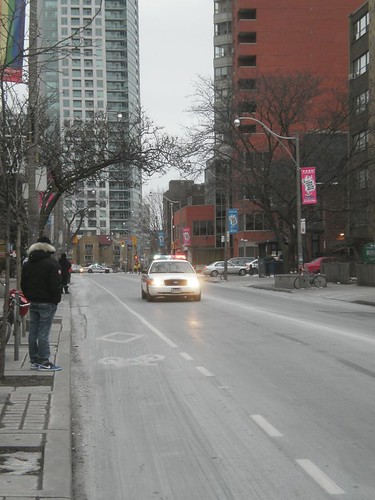 They stand, and watch
Originally uploaded by rfmcdpei 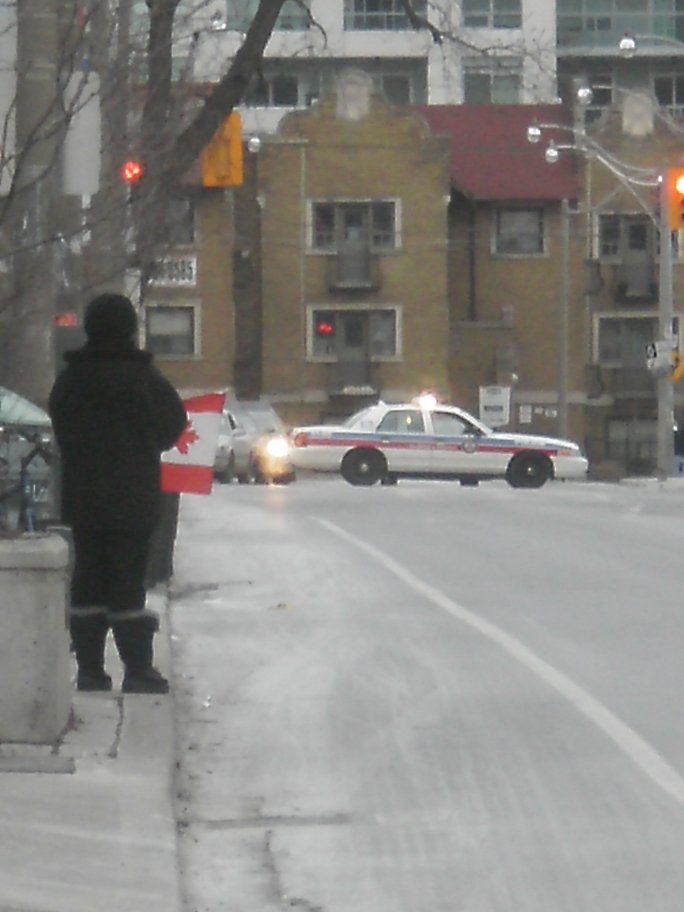 Waiting by the side of the road, flag in hand
Originally uploaded by rfmcdpei 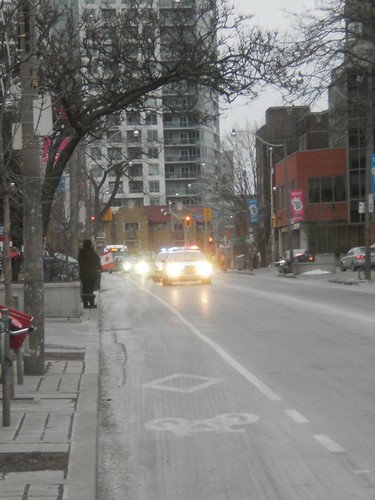 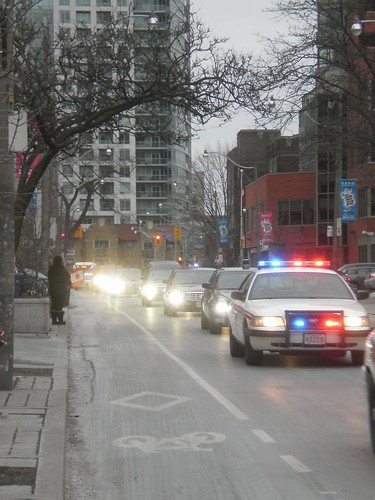 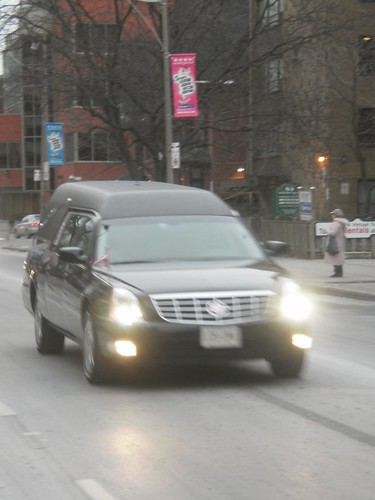 Hearse
Originally uploaded by rfmcdpei
Just behind the hearse, I caught a glimpse of a sad, dark-haired and black-dressed, woman looking from the open window of a long black car. I wonder who she was.
Collapse