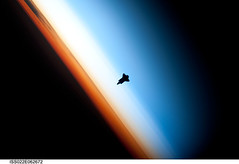 "Planet Earth is blue, and there's nothing I can do"
Originally uploaded by rfmcdpei
The picture came from Twitpic via Will Baird.

This will be the last big expansion for a while. I hope.

First, here's the CBC on the Canadian situation.

Life expectancy at the opposite end of the age spectrum also showed an upward trend over 10 years.

Next comes the World Health Organization on the situation worldwide.

A Japanese girl born today could likely reach 86 years of age, the longest life expectancy anywhere in the world, while a Canadian girl could expect to see 83 candles on her last birthday cake, the World Health Organization said in a report Thursday.

A Canadian male will likely live until 78, while men in the tiny European country of San Marino, can expect to live to 81, the UN health agency said in its annual report, World Health Statistics 2009.

In contrast, boys born in Sierra Leone face the shortest life expectancy, at just 39 years. In Afghanistan, men and women live on average to 41 and 42 years respectively.

The report uses figures from 2007, the most recent that were available for the WHO's 193 member states.

Some countries have made progress in increasing life expectancy since 1990, partly by ending wars, and partly through strengthening health systems.

I'm a fan of the Toronto Public Library (on Facebook and Twitter too!). It might be self-interested for them to link to this post by Sassymonkey Reads describing the huge savings she made by borrowing her books and music instead of buying it, but even so, it holds up.

I’ve been keeping a spreadsheet of books that I read for several years now. In 2008 I just added a “source” column and add in “library” or “own” or “borrowed” whenever I’m entering the book. I also added a column for the price of the book.

Now, this is where you could argue with me about cost. I use the Canadian cover price of the book (Canadian cover prices are usually higher than American cover prices and yeah, as a Canadian who likes to buy books it does suck). Yes, I could (and frequently do) pay less than the cover price of most books that I buy. I imagine that most frequent readers do. Not everyone does though. Some casual readers who don’t want to hunt around for a better price, impulse buyers, or people who shop at independent bookstores, still often pay full price. Also, if I was going with a discounted price what discounted price should I use? They change all the time. Would I look around for different sales and find the best one? Or make an average of them? And what if I find the best deal in USD, would I then have to convert it to CAD? For it work, yes. Honestly, it’s all too darned confusing. Cover price is just plain easier all the way around.

I don’t track books I don’t finish so they aren’t included here. Ditto magazine, CDs, and DVDs or anything that my husband checks out of the library. I also don’t track cookbooks or knitting pattern books that I check out, which to be honest I probably should because the library saves me money there. I used to have an issue with buying cookbooks and then not using them so I started checking most of them out from the library before I bought them. I’ve been able to weed out ones that aren’t worth buying and some that are. Very useful and it makes me feel thrifty. And I’m not even beginning to touch the other services that libraries offer – internet usage, courses, story-time for children, homework programs. The list could just go on and on.

I only track books that I finish. When I’m making my list and figuring out the cost I stick to the format that I read it in. If it was an audio book I price what it would cost. If it’s a hardcover I don’t take the paperback price. So how much did I save last year?

Now, I’m a fairly heavy reader but that was a light library year for me. Yes, really. If you look at my 2008 post I had read $1,128.27 worth of books between March and October. (I wasn’t using the library before March of that year and the post was published November 1.) I was using the library more heavily during that time for a number of reasons, one being that I had a lot more time since I wasn’t working. Another was that the bulk of that time I was living in a new city and hardly knew anyone. In 2009 I read more books than 2008 overall but fewer of them came from the library. I read a lot of free e-books from Manybooks.net on my Sony Reader and iPhone. Since I was working again I also bought more books than I had the year before. But still, $1,239.27 is nothing to sneeze at. That’s a vacation or a few long weekends away for us. Or a big chunk into our savings account.

Yes, I am a heavy reader by many people’s standards. For a minute let’s pretend I’m not. Let’s pretend I’m a one book a month person and that I normally buy my books. An adult fiction trade paperback in Canada will usually run you anywhere between $15-20 so let’s take $17.50 for an average. At one book a month that’s $210 over the course of a year. If my library charged me $0.25 per day for late fees I’d have to check in my books a collective amount of 840 days to match that amount. If I don’t return any books late at all I would have an extra $210 in my pocket. I can think of a few things to with an extra $210, can’t you? I know people who have to pay to belong to a library, but even as much as a $100 membership will leave you with just over $100 in your pocket at the end of the year.

This probably was bound to happen sooner or later. If dolphins and primates are being given status as citizens of a sort, why not treat abusers of these--and other--animals the same way one would treat abusers of humans?

California may soon place animal abusers on the same level as sex offenders by listing them in an online registry, complete with their home addresses and places of employment.

The proposal, made in a bill introduced Friday by the State Senate’s majority leader, Dean Florez, would be the first of its kind in the country and is just the latest law geared toward animal rights in a state that has recently given new protections to chickens, pigs and cattle.

Mr. Florez, a Democrat who is chairman of the Food and Agriculture Committee, said the law would provide information for those who “have animals and want to take care of them,” a broad contingent in California, with its large farming interests and millions of pet owners. Animal protection is also, he said, a rare bipartisan issue in the state, which has suffered bitter partisan finger-pointing in the wake of protracted budget woes.

Under Mr. Florez’s bill, any person convicted of a felony involving animal cruelty would have to register with the police and provide a range of personal information and a current photograph. That information would be posted online, along with information on the person’s offense.

The bill was drafted with help from the Animal Legal Defense Fund, an animal-protection group based in Cotati, Calif., north of San Francisco. The group has promoted the registry not only as a way to notify the public but also as a possible early warning system for other crimes.

“We know there’s a link between those who abuse animals and those who perform other forms of violence,” said Stephan Otto, the group’s director of legislative affairs. “Presumably if we’re able to track animal abusers and be able to know where they live, there will be less opportunity where those vulnerable to them would be near them.”

In addition to sex offenders, California lists arsonists in an online registry, and the animal abusers would be listed on a similar site, Mr. Florez said. Such registries have raised privacy concerns from some civil libertarians, but Joshua Marquis, a member of the defense fund’s board and the district attorney in Clatsop County, Ore., said the worries were unfounded.

“Does it turn that person into a pariah? No,” Mr. Marquis said. “But it gives information to someone who might be considering hiring that person for a job.”