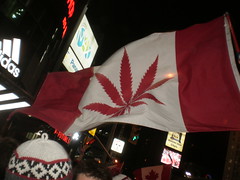 The Canadian Marijuana Flag
Originally uploaded by rfmcdpei
When Jerry took me down to Yonge-Dundas Square at 7 o'clock on the night of the 28th of last month to join the crowd celebrating the Canadian Olympic gold medal given to us by Sidney Crosby's adroit goal, we found ourselves in the middle of a sea of Canadian flags and people chanting "CA-NA-DA." Just behind us was a clutch of a half-dozen people chanting "CA-NNA-BIS" and waving this flag, the maple leaf replaced by a clutch of leaves very similar to the emblem of the Marijuana Party of Canada. At least they were having fun.

This review of a recent study of ideology and human intelligence, one suggesting that liberals and atheists tend to be smarter than conservatives and religious believers, made me feel quite uncomfortable.

(Note, please, that my criticisms start from the assumption that the data sets are meaningful. As someone critical of many of this study's critics points out, the categories used by this study are based not on the relatively objective definitions of an external observer, but are instead based on notoriously unreliable self-definitions.)

Evolutionary psychologist Satoshi Kanazawa at the the London School of Economics and Political Science correlated data on these behaviors with IQ from a large national U.S. sample and found that, on average, people who identified as liberal and atheist had higher IQs. This applied also to sexual exclusivity in men, but not in women. The findings will be published in the March 2010 issue of Social Psychology Quarterly.

The IQ differences, while statistically significant, are not stunning -- on the order of 6 to 11 points -- and the data should not be used to stereotype or make assumptions about people, experts say. But they show how certain patterns of identifying with particular ideologies develop, and how some people's behaviors come to be.

The reasoning is that sexual exclusivity in men, liberalism and atheism all go against what would be expected given humans' evolutionary past. In other words, none of these traits would have benefited our early human ancestors, but higher intelligence may be associated with them.

"The adoption of some evolutionarily novel ideas makes some sense in terms of moving the species forward," said George Washington University leadership professor James Bailey, who was not involved in the study. "It also makes perfect sense that more intelligent people -- people with, sort of, more intellectual firepower -- are likely to be the ones to do that."

Bailey also said that these preferences may stem from a desire to show superiority or elitism, which also has to do with IQ. In fact, aligning oneself with "unconventional" philosophies such as liberalism or atheism may be "ways to communicate to everyone that you're pretty smart," he said.

A few years--months, really--ago, I might have been flattered, but I'd like to think that even then I would know that the principle of mediocrity likely applied to me: the religious people I know are just as smart as the non-religious people I know. Granted, the fact that I'm friends with an ungodly number of medievalists who are not only ferociously intelligent as a body but tend to be religiously observant biases things somewhat, but still.

Regardless, that initial impression's irrelevant since these averages apply to groups, and to very broad groups at that. Kanazawa's study apparently splits the polled populations into two halves--97 and 103, remember--but since only something like a tenth of North Americans are atheist that the half of the polled population with an average of 103 has to include a very large number of people who are religious to some degree. I'm guessing that, if Kanazawa's right, the other ~40% included in the smarter moiety would be people who are religiously observant or identified to one degree or another, but surely, unless there's a very odd distribution within this moiety and the entire population aren't very useful in day to day life. The six-point difference in IQ between the two moieties is much less than a standard deviation, and the two populations would overlap very considerably. Kanazawa claims that the "young adults who said they were "very conservative" had an average adolescent IQ of 95, whereas those who said they were "very liberal" averaged 106"; that's still less than a standard deviation. This isn't a useful

The negative correlation between religiosity and intelligence that Kanazawa talks about it isn't nearly large enough to justify sweeping prejudices against one moiety or the other. After all, religious institutions--the Roman Catholic Church comes quickly to mind--are highly complex bureaucratic and ideological entities which have often done fairly good jobs of inculcating populations of diverse origins with fairly complex belief systems. These are not the creations of dumb people. Kanazawa doesn't bother to distinguish between types of religiosity, or shades or gradations of any kind, really.

Let's not forget that this study is actually pretty simple-minded when it comes to dealing with complex sociological and cultural realities like religion. See below.

The study takes the American view of liberal vs. conservative. It defines "liberal" in terms of concern for genetically nonrelated people and support for private resources that help those people. It does not look at other factors that play into American political beliefs, such as abortion, gun control and gay rights.

Given that human ancestors had a keen interest in the survival of their offspring and nearest kin, the conservative approach -- looking out for the people around you first -- fits with the evolutionary picture more than liberalism, Kanazawa said. "It's unnatural for humans to be concerned about total strangers." he said.

These definitions are astoundingly bland, devoid of the historical and cultural context which gives them meaning. Moreover, it's worth noting that religions almost universally are concerned with the fates and treatment of "total strangers": missionaries, anyone? Shall we assume that such an idea as religious charity has never been demonstrated before? Shallw e ignore the statistics suggesting that in at least some countries, the religious contribute more to charity than the non-religious?

Kanazawa's dealing in unsubtle prejudices. The fact that Kanazawa is racist wingnut, as recently as January 2010 writing that 120 million young Muslim men want to be suicide bombers after earlier advocating the Ann Coulter-style indiscriminate-mass-slaughter-of-civilians approach to Muslim terrorists, proves this tendency on the author's part. P.Z. Myers is almost right to dismiss anything the man writes. It is possible that the press reviews of Kanazawa's article don't do it justice. (Maybe.)

It's certainly true that, even if Kanazawa's data and analyses and conclusions are impeccable, the speed with which his paper's conclusions have been taken up to reinforce lazy prejudices that conservatives and the religiously observant are less intelligent than liberals and the less observant doesn't say much about the intellectual integrity of many in the supposedly more favoured moiety. This prejudice just doesn't take into account the slim differences between the two moieties, it doesn't taken into account the overlapping distributions if intelligence in these overlapping moieties, it doesn't bother at all to consider the very real facts that a religion/atheism binary doesn't exist and there are many different forms of religious belief and practice. It has led too many people to the shallow and demonstrably false conclusion that the ideas and institutions of conservatives and the religiously observant must be false, since how could anything that these people create not be fundamentally flawed?

The reactions to this study demonstrate yet again that some people remain as willing as ever to seize upon convenient statistics and study to justify their personal (here, political and religious) prejudices. My readers can cite other examples of this, I'm sure, I want to at least limit the possibilities of a flamewar here. When will we ever learn?
Collapse