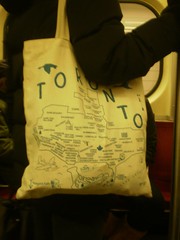 A old Toronto, an old book bag
Originally uploaded by rfmcdpei
Before 1998, the area that's now the single City of Toronto was Metropolitan Toronto, a a federation of municipalities including and surrounding the much smaller city proper. Travelling on the subway a while back, I saw a woman carrying a book bag decorated by a map of this old city of Toronto, the graphic including the names of the old city's different neighbourhoods. (A logo in the bottom left seems to suggest the book bag came from Niagara Falls.) 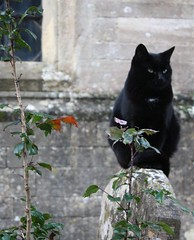 You are cramping my style human
Originally uploaded by richardr
"The incumbent church cat at St Bartholomew in Yarnton was less than enthused by the photographic attentions arising from last weekend's flickrmeet."

Indeed. But the cat's a cat and so has its own prerogatives. As it knows.

Patrick Cain's Map of the Week blog, maintained by the web editor of the Toronto Star, is easily the best Toronto map blog out there. Some of you who've taken a look at my blogroll know that I'm quite a fan of maps. You should be a fan of maps, too: they help show, in easily comprehensible form, the various divisions and quantities and qualities of the territories that define any society. One of these maps--5 January 2010's "Map of the Week: Commuter cycling by census tract"--shows which neighbourhoods of Toronto are home to people who commute regularly via bicycle and which are not, and, in so doing, shows why biking isn't big across Toronto and why there are so many disputes within Toronto as to the use of biking. The areas coloured dark blue in the area of the Cain's map of Toronto bike commuting are all but one of the areas where 10-12% of the resident population commutes via bicycle, and are themselves surrounded by most of the other bicycle-happy districts of the city. 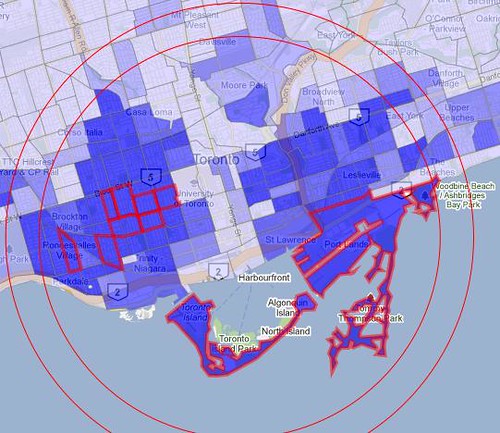 Below is a map, originally from here, created by Wikipedia's Lencer and edited by Simon P, showing the municipal boundaries of the various communities federated in Metropolitan Toronto (1954-1998) before these communities' amalgamation into a single megacity. 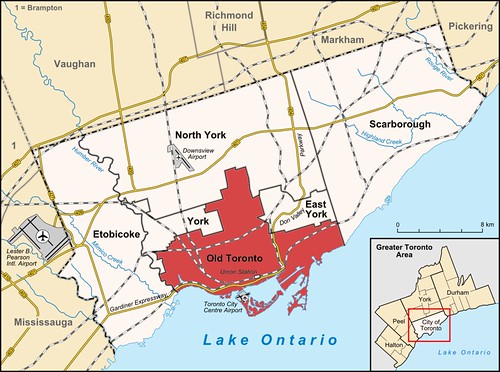 At some small risk of generalizing, the former city of Toronto, comprising the south-central area of the megacity, along Lake Ontario, is the densely built core of the city, with the narrow streets defined by a high destination of commuters' homes and destinations and relatively slow speeds conducive to biking. Away from the old city, into the areas which saw their big development in the post-Second World War boom, the broader and quicker roads covering greater distances less conducive to biking predominate.

I'm a very big fan of the bicycle. I don't commute via bike since an hour's bike ride is too much for me, but I enjoy exploring the city on bike, with or without Jerry, enjoying the speed I reach and the careful attention that I have to pay to my surroundings for safety and scenic reasons. I, however, have always lived in neighbourhoods where commuting via bike is at least a possibility, where my surroundings are bike-friendly enough for it to be an option. If I lived outside of these densely populated city neighbourhoods, I wouldn't have the option. Who knows? If I hadn't had a chance to start biking on a Prince Edward Island with relatively slow traffic flows, but had instead lived in geographically peripheral neighbourhoods where cycling wasn't even a good option for sports, I might not have biked at all. It's no wonder that biking's irrelevant, or even a nuisance, to most Torontonians; for the large majority of Torontonians (the roughly two out of two and a half million who live outside of the old city) biking's literally not even on the map. Hectoring these people for not following the Pure Way is, besides being counterproductive, useless: for biking to be an option, a whole series of slow and expensive investments in cycling infrastructure that don't detract from the existing lifestyle will be necessary. Will the City do this in the future? I hope, but I don't expect.

Over at Spacing Toronto, Shawn Micallef reposted a column of his, originally from eye weekly, talking about Toronto's many solitudes.

Toronto is a city of neighbourhoods, we’re told. When they work well, they feel like a small town and, when they work really well, we might feel like Al Waxman in the opening credits of the King of Kensington, walking down the street like we own it. That’s all fine, but it gives us a false sense of the size of the city. Sometimes it’s good to be reminded of just how big Toronto is.

Try standing over an expressway. Anytime is good, but late afternoon when the rush is at its peak is best. The bottom of Dufferin over the Gardiner, right before the Canadian National Exhibition arch, is good, as is the top of Avenue Road where the 12 lanes of the 401 have been called the busiest road in North America. Every second, dozens of individual people pass by, each going to an individual home, some filled with more individuals, each with their own network of friends and coworkers. It’s a web that doesn’t stop growing, and watching the traffic and thinking this way gets overwhelming fast. Where do all these cars park? How many pairs of pants does everybody own? The numbers add up meaninglessly high.

Another rush-hour place to feel this more intimately is the Union Station basement at 4:45pm on any weekday. Try standing still in the middle of the thousands of GO Train passengers. It’s like a flash-flood mudslide and, if you don’t watch out, you’ll be swept up and taken away to Pickering or Newmarket. The mental aggregate of all this is confounding — we can see all these people, but it’s hard to know where they fit into “the city we know.” It’s too much.

Facebook helps make sense of people by organizing our networks, but do a bit of stalking of strangers — especially ones that seem to live in the same general part of town as you do — and it’s remarkable how many people you can find that have ridiculously high “friend” numbers — into the hundreds or even over a thousand — who you don’t have any friends in common with. That there is no overlap of these vast networks is as dramatic a sign of Toronto’s human depth as the 401 is.

We spend a remarkable amount of our Toronto lives in metaphorical tunnels and islands. We’ve got our social groups — the people we know — and well-worn routes between them that lead to an impression of knowing the “edges” of Toronto, but it’s an illusionary and parochial view. Toronto’s deeper than any of us can imagine, but the depth is in places we don’t pass by everyday: at Church basement meetings we don’t hear about, in North York strip-mall nightclubs not listed in this newspaper and at concerts that aren’t considered cool. Queen West hipsterland may as well be another country when viewed from Clubland. Toronto activist circles may never bump into Bay Street money folk, they just read about each other in the news. Yet it’s all Toronto.

We limit our Toronto experiences for good reason: we’d not be able to cope with knowing everything. Yet we (and I) often say “we” when describing the city and our fellow Torontonians in it. “We are despondent about the Leafs.” “We got through SARS together.” But what does that “we” mean if we have no idea or direct connection to all those people? This becomes especially apparent in an election year, when candidates try to talk directly to you, but also to 2.5 million other people. This city of small towns suddenly seems full of disparate strangers.

And still, Micallef observes, we find our ways to each other, and we can find still more ways if we try.

Go read the entire column for the rest of your serving of good Micallefish stuff.

The Globe and Mail's Les Perreaux points out that although (some) English Canadians might want to change "O Canada" into a more gender-inclusive anthem or something, Canada's Francophones are actually pretty happy with the French original. As well they should: I've long known that the French text is far superior to the English official translation, poetically and otherwise.

The original French words to Ô Canada were the first verse of a poem penned by the conservative, staunch Catholic, French-Canadian nationalist judge, Sir Adolphe-Basile Routhier.

He was commissioned to compose the lyrics for St-Jean-Batiste day at a time when French speakers were nearly half of the Canadian population. Calixa Lavallée, among the first prominent Canadian-born musicians, put the poem to music. Mr. Routhier and at least 20 others set about writing the perfect translation. Poets and composers made most of the early attempts, while parliamentarians took over in the 1960s.

Today's English O Canada was adopted in 1980 and was based on the 1908 words written by Stephen William Weir Simpson. Neither version is identical to French Ô Canada, a flowery ode to ancestors which flowed into a subsequent verses in tribute to God and the Saint Lawrence River valley.

An academic once suggested Quebeckers have a better sense of history than English Canada and are willing to live with old symbols. There are many other reasons francophones leave the anthem alone, according to Serge Gauthier, a rare historian who has made Mr. Routhier part of his life's work.

While some Quebec sovereigntists attempted to reclaim the composers of Canada's national anthem as part of their heritage in the 1960s, the conservative, religious nationalists of the 1880s would hardly condone the leftist, secular movement of the Quiet Revolution.

“For some, the song is an intrinsic part of their identity, while others reject it outright. It's a dead letter and they don't care,” Mr. Gauthier said. “Most young people only know it from hockey games, when half of it is sung in English.”

Most Quebeckers, on some level, accept “the providential side of the survival of French in North America,” Mr. Gauthier said. “So references to God in that context aren't necessarily offensive. It's an image people don't mind preserving.”

The French song is 130 years old but managed to nail one major note of a politically correct, modern-day anthem. The song is about as gender neutral as French can be.

“The French version is not offensive in any sexist way,” said Adèle Mercier, a philosophy professor at Queen's University in Kingston, Ont., who is pushing for change to the English version.

“The French version has a certain historical integrity. It's easily placed within the context it was written,” said Prof. Mercier. “The only thing is it's a bit quaint in its enthusiasms.”

The English version, which was thoroughly vetted by government committee starting in the 1960s, “is sung in current language, it's timeless, which makes the sexism of it all the more insufferable,” she said.

Even the religious references in French are more acceptable, Ms. Mercier said. One line speaks vaguely of “valour steeped in faith” while another describes a Canada strong enough to bear either a sword or a cross.

“It's just a symbol for suffering. It's not God,” she said.