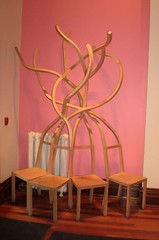 An edited chair at the Gladstone
Originally uploaded by rfmcdpei
This picture of the oddly-designed chair in the lobby of the Gladstone Hotel, a boutique hotel in an increasingly gentrifying and high-concept-arted Parkdale district has meaning to me apart from being an image of a really cool chair. It's the first image I've uploaded to my Facebook account that's been edited Photoshop-style. I didn't use Photoshop to get rid of the thin sliver of dark wood trim that cut into the left edge of the original photo, instead using Windows Paint to copy-and-paste pale pink on top of the unwanted intrusions.

A day ago I came across Charles Arthur's Guardian article "How we learned to love Photoshop", celebrating the 20th anniversary of the release of the computer program that gave anyone the ability to play havoc with photography and veracity. I've stayed away from Photoshop for these reasons, but now, looking at this improved photo, I wonder if I stayed away from Photoshop and its kindred because I was being a boresome purist.

A few hours after I watched Alice in Wonderland with Jerry last night, I Twittered that "Tim Burton is the Neil Gaiman of film," and that I wasn't quite sure whether that's a good thing. Gaiman and Burton have each gained their fame through their reimagining of the fairy tales and fantasies we've grown up with as children into satisfying adult narratives, slightly shabby and subtly dangerous stories as grounded with the lives of the stories' readers as the readers can bear. Burton's visual universe is amazing, leaving me feeling authentically disoriented, the actors do their jobs well (Mia Wasikowska holds the film together wonderfully, Johnny Depp and Helena Bonham Carter do their patent crazy as well as they always do, and Anne Hathaway's polite but edged spaciness is a pleasure), and I left feeling satisfied and willing to grant the movie a seven or even eight out of ten, but there was still something lacking.

Victoria made a wonderful point to me, in conversation after our group's weekly dose of Sayles, about how the Victorian world of Alice in Wonderland isn't our Victorian world, the one that will forever be defined entirely by costume dramas and APA citations, but rather a more open-ended Victorian world, one that doesn't have every possibility confirmed or denied and leaves no leeway for the viewer to imagine something different than what could have been. The denizens of a past world shown in film now have more possibilities than reality could have offered.

(I give the film an eight or even a nine out of ten, now.)

Facebook's Tom linked to this news article. The updated news article goes on to note that the military actually had specifically warned the soldiers involved in the raid against using Facebook. What a fool.

In Israel, the military had to call off an entire operation after a trooper posted the time and place of an upcoming raid in the West Bank on his Facebook page. D’oh! According to Associated Press, the soldier boasted that his unit was planning on “cleaning up” the village.

It’s the kind of scenario that keeps military planners up at night: A meticulously planned operation goes dangerously awry because some dolt couldn’t resist telling every one of their Facebook friends or Twitter peeps about it. In this case, the Israelis moved swiftly to respond.

“Fellow soldiers reported the leak to military authorities, who called off the raid fearing that the information may have reached hostile groups,” the AP noted. “The soldier was court-martialed and sentenced to 10 days in prison.”

Instantaneous electronic communication can be a dangerous thing, and the U.S. military is also wrestling with new rules to allow troops more access to social networking sites. As this incident shows, balancing the openness of Web 2.0 with the need for operational security is not a problem exclusive to the U.S. armed forces.

It’s doubly interesting to read about this case, because the Israeli military has worked very hard to use social networking as an information warfare tool. During Operation Cast Lead in late 2008 and early 2009, the the Israeli military started its own YouTube channel to distribute footage of precision airstrikes; Israeli diplomats even hosted a press conference on Twitter.

This news doesn't surprise me, although the sample size does place limits on the survey's reliability. I'm on the Internet, known under my own name, because I want to be known as myself, or at least as something pretty close to what I'm like in person. (I try.) Why wouldn't other people?

College-age users of Facebook in the United States and a similar social networking site in Germany typically present accurate versions of their personalities in online profiles, says psychologist Mitja Back of Johannes Gutenberg University in Mainz, Germany. People use online social networking sites to express who they really are rather than idealized versions of themselves, Back and his colleagues conclude in an upcoming Psychological Science.

“Online social networks are so popular and so likely to reveal people’s actual personalities because they allow for social interactions that feel real in many ways,” Back says.

The subjects — who ranged in age from 17 to 22 — took the inventory twice, first with instructions to describe their actual personalities and then to portray idealized versions of themselves.

Then, undergraduate research assistants — nine in the United States and 10 in Germany — rated volunteers’ personalities after looking at their online profiles. Those ratings matched volunteers’ actual personality descriptions better than their idealized ones, especially for extraversion and openness.

Facebook is so true to life, Back claims, that encountering a person there for the first time generally results in a more accurate personality appraisal than meeting face to face, going by the results of previous studies.

Adriana Manago, a psychology graduate student at UCLA, calls the new findings “compelling” but incomplete. College students on Facebook and other online social networks often augment what they regard as their best personal qualities, Manago holds. In her view, these characteristics aren’t plumbed by broad personality measures like the ones measured in Back’s study. And students’ actual personality descriptions may have included enhancements of their real characteristics, thus inflating the correlation between observers’ ratings and students’ real personalities, Manago notes.

The fact that she lived all but three years of her life in the United States says something about the attractiveness of the Prince Edward Island of her youth.

Mary Josephine Ray, born on P.E.I. and certified as the oldest person in the United States, died Sunday at the age of 114.

She died Sunday at a nursing home in Westmoreland, N.H., but was active until about two weeks before her death, said her granddaughter, Katherine Ray.

"She just enjoyed life. She never thought of dying at all," Ray said.

"She was planning for her birthday party."

Even with her recent decline, Ray managed an interview with a reporter last week, her granddaughter said.

The oldest person in the world is Japan's Kama Chinen at age 114 years, 301 days, one week older than Ray.

She lived for 60 years in Anson, Maine. She lived in Florida, Massachusetts and elsewhere in New Hampshire before she moved to Westmoreland in 2002 to be near her children.

Will Baird blogged that China is studying the idea of launching a heavy-thrust rocket similar to the defunct Soviet Energia or the American Saturn V of moon mission fame, capable of tossing dozens of metric tons into Earth orbit or towards the Moon.

China is studying the design of a Moon rocket in the class of the Saturn V, as the Obama administration proposes canceling the U.S. successor to the Apollo launcher, Ares V.

The country also is developing another new rocket, the “medium thrust” Long March 7, the China Academy of Launch Vehicle Technology says. This new launcher joins the Long March 5 heavy rocket and the Long March 6, which was mentioned last year and is now defined as a “small-thrust” launcher. Long March 5, 6 and 7 will form a family of rockets, it says.

Chinese space officials have said that the Long March 6 was based on the side boosters of the Long March 5. Those side boosters come in two sizes, which could be arranged variously as first or second core stages or as boosters. Long March 7 is therefore likely to be a more powerful combination of the same collection of equipment.

And 80 Beats carries the news about China's upcoming space station.

China will soon have an outpost in space. The government has announced that its first unmanned space module, the Tiangong-1 (or “The Heavenly Palace”), will be launched next year.

The module will serve as a docking station for other spacecraft before being transformed into a permanent taikonaut residence and space lab within two years of the launch [Nature blog]. It was originally due to launch this year, but now will see flight only late in 2011, due to technical reasons, Chinese officials said. The Tiangong-1 is expected to be 30 feet long and capable of housing three taikonauts; future missions will add other modules to construct a larger Chinese space station.

The Tiangong-1 design, unveiled in a nationally televised broadcast on last year’s Chinese New Year, includes a large module with docking system making up the forward half of the vehicle and a service module section with solar arrays and propellant tanks making up the aft [SPACE.com]. The Tiangong-1 is expected to dock the unmanned Shenzhou 8 spacecraft first to test the robotic docking systems before hosting the manned Shenzhou 9 and 10 spacecraft, which are both expected to carry two or three taikonauts into space.

If China goes on to build the launch vehicle and the beginnings of its own space station, I'll be impressed. This would take China's space program in the direction of the United States' or the Soviet Union's in the 1970s, with powerful boosters capable of launching heavy payloads into earth orbit or manned missions to the Moon, with simple stations like America's Skylab or the Soviet Union's Salyut series. Whether this is a sensible trajectory for China to follow, judging by what happened to the American and Soviet space programs after the 1970s, is a separate matter, although if it turns out that the China National Space Administration et al manages to make this a workable non-dead end I'll be all the more pleased. Ideas, anyone, on how China could pull this off?
Collapse