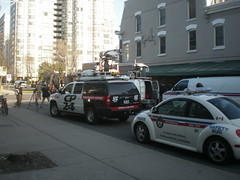 (The police got called at 141, an elderly couple were trying to sneak across Yonge at this intersection away from the crosswalk on this beautifully warm and clear day but walked into the path of the oncoming grocery truck and suffered serious injuries, and today the situation does not look good).

By the time I got to the site of the crash, dense crowds of onlookers and news organizations had accumulated, notwithstanding the one block barred to vehicular traffic and the second barred to traffic altogether. CBC, CTV, the CP24 reporter with her cameraman that you can see to the left--in the three hours since, all had made it before me.

3 Quarks Daily linked to a Los Angeles Times article by one Ed Park that mentions James Maliszewski. Maliszewski, a Torontonian gamer who's a former denizen of Livejournal, Grognardia, has a blog that has gained some repute.

Though it's nominally about "the history and traditions of the hobby of role-playing" -- Dungeons & Dragons and its ilk -- it's also an invigorating meditation on aesthetics. Maliszewski is an adherent of the "old school" movement, which favors flexible, elegant gaming systems (the original D&D, circa 1974, a.k.a. OD&D, published in "little brown books") to those that pile on so many supplementary rules and tables that they begin to feel restrictive rather than prescriptive.

How many rules -- how many words -- do you need to create a world?

The same question could be asked of literature. Indeed, a session of a role-playing game, or RPG, with its emphasis on character and absence of winning or losing, often resembles a story, collaboratively generated by the players. Reading Maliszewski's lucid writing -- on vintage RPGs, unearthed Gygaxia, the literary DNA of D&D, and contemporary system-philosophy brouhahas -- is both a kick of nerdy nostalgia and a satisfying take on what it all means, even if you're someone (like me) who hasn't rolled a 12-sided die in ages.

Grognardia's an interesting read, while Park goes on to cite some recent examples of roleplaying games in popular fiction. Go, read them. 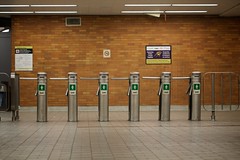 Entrance Array
Originally uploaded by Aaron Forster
The TTC can be imposing even without attendants. Spadina station?

Sophie Leung's Bloomberg article isn't surprising. If Hong Kong's peers are no longer being shackled despite their comparable or even greater advantages, why wouldn't they surpass Hong Kong? And why wouldn't this be a good thing?

Shanghai’s economy exceeded the size of Hong Kong’s for the first time in at least three decades after stimulus spending helped China skirt the global crisis and lead the world out of recession.

Shanghai’s gross domestic product grew 8.2 percent to the equivalent of $218.3 billion in 2009 compared with a 2.7 percent contraction to $210.7 billion for Hong Kong, according to data compiled by Bloomberg. The preliminary reading on Shanghai was published in January and Hong Kong’s release came last week.

The figures highlight 30 years of free-market policies that have spurred China to become the world’s third-largest economy and its No. 1 exporter. Shanghai’s rise may fan concern in Hong Kong that the mainland city will regain its position as China’s dominant financial center, after surpassing the former British colony as the nation’s biggest port and stock-market operator.

“Hong Kong’s role as the bridge linking China and the West is diminishing due to the further opening up of China,” said Hubert Tse, 36, a partner at law firm Boss & Young in Shanghai, who moved to the city from Hong Kong in 2003. “I’m witnessing history as China continues to power ahead.”

Bloomberg data giving U.S. dollar comparisons for the cities’ economies back to 1981 showed Hong Kong previously leading Shanghai. David Cohen, an economist at Action Economics in Singapore, said “based on those nominal figures, converted at the prevailing rates, it would appear that the Shanghai economy is slightly larger.”

This is just a historical reversal.

From the late 19th century until communists took rule of the mainland in 1949, Shanghai was “an international city hooked into the world economy” and Hong Kong was only a “colonial outpost,” said Kerrie MacPherson, a University of Hong Kong professor who specializes in urban history. Their positions “reversed after 1949 with the anti-capitalist policies of the newly minted” People’s Republic of China, MacPherson said in an e-mail yesterday.

At any rate, although the size of the cities' economies is comparable even accounting for the presumed greater sketchiness of the Chinese numbers, the fact that three times as many people live in Shanghai as in Hong Kong depresses per capita output (and, presumably, income): "Hong Kong trounces Shanghai on output per person. The most recent per-capita GDP figures, for 2008, show Hong Kong with $30,977 and Shanghai at $10,713."

Everyone, welcome [NEWS]! I'll find a suitable icon as quickly as I can.