Of course cats can play fetch. April Holladay's Globe and Mail piece proves what I know about Shakespeare, albeit only after Jerry taught me. Why else would I have so many rubber and foil balls lying around my apartment? Below's a YouTube video of a Bengal kitten playing fetch, if you don't believe my assertions.

Cats and dogs are both domesticated, but their domestications were quite different, as Holladay notes.

In 2007, researchers examined the mitochondrial genes of about 980 domestic cats and five subspecies of wildcats from three continents to determine when and where humans domesticated cats.

The studies showed human association with cats began much more recently than dogs, probably about “9000 years ago as the earliest farmers of the Fertile Crescent [approximately where modern-day Iraq is] domesticated grains and cereals as well as livestock animals,” writes molecular biologist Carlos A. Driscoll of the National Cancer Institute in Science magazine.

It's more likely, however, “we didn't bring cats into our homes, they brought themselves in,” Driscoll says. Cats like to chase mice (or, perhaps like Duma, flying green rings); it's instinctive behavior. We never trained cats to hunt rodents. But we did provide a profitable place to hunt: many mice and few predators. So cats domesticated themselves merely by evolving a tolerance for people. “And — voila! — they had adapted to their new niche.”

Thus, humans have had twice as long to train and communicate with dogs (16,000 years) as cats (9,000 years), so dogs train easier. Moreover, cats started associating with humans doing what they wanted to do — hunt and kill rodents. Whereas, dogs emerged from wolf family packs that hunted together. Dogs have been strongly selected for “an innate ability to learn complicated tasks”, such as shepherding, retrieving and guarding, which often require communication with humans, Driscoll says. In contrast, domestic cats do not “intuit the intentions of others” (either human or feline) to the extent that dogs do and that hinders a cat's ability to follow directions.

The main difference between dogs and cats, as revealed in a 2005 Hungarian study, was that the more social dogs looked to their owners for help problem-solving earlier than the more solitary cats, less used to collaboration with humans or other cats and perhaps also less physically expressive. 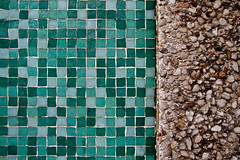 20100128-IMG_0583-7
Originally uploaded by pj.stephen
pj.stephen takes a look of interesting photos with the theme of contrasts: sharp edges against sky, one colour against another, one texture against another. This picture, with sea-blue tile against pebble-grey concrete, is simply beautiful. 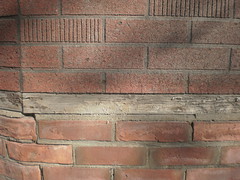 Brick and sandpaper in Rosedale
Originally uploaded by rfmcdpei
When Jerry and I were walking through the tony Toronto neighbourhood of Rosedale on Mount Pleasant Road this Sunday past, Jerry stopped and looked at the corner of one building.

"Look," he said, "the bottom of this house is brick, but above the wood it looks like it's--it's sandpaper!" And indeed, when I looked closer, I could see the naturalistic pattern as regular as any of the background patterns of my Commodre 64's geoPAINT. If you look closely you can see the round nail heads holding this facade to its building.

I've a rather significant electronic footprint. My two main platforms are Livejournal and Facebook, neither taking particular priority over the other (Livejournal hosts my blog and is where I've been active the longest, Facebook encompasses my Livejournal postings as well as most of my social interactions. Platforms of secondary importance Twitter (mainly as an adjunct to Facebook via SelectiveTweets and as a source of links), as well as Blogger for Demography Matters, Wordpress for Outside the Lines, and Flickr for my photographs and those of the friends and groups I follow. My particiption in LinkedIn and YouTube is nominal; the latter's more useful for simply watching videos, and LinkedIn's dominated by spam.

What social networking platforms do you use? Tell, discuss.
Collapse