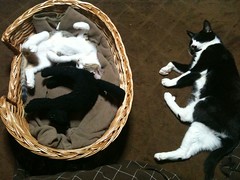 Originally uploaded by nijntjee
Adorable, no? 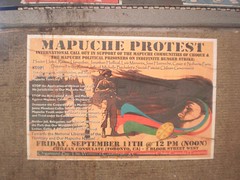 On the Mapuche
Originally uploaded by rfmcdpei
Chile is a nation-state with a fairly homogeneous and Europeanized population, a mixture of mestizos and immigrants coming from across Europe and Asia and more recently South America, but the Mapuche of the Araucania region of southern Chile stand out as a distinctive population. Much like other First Nations elsewhere in the hemisphere, the Mapuche contest land claims and sovereignty with their national government. In the area around the University of Toronto, there have been plenty of posters advertising pro-Mapuche (or at least pro-Mapuche activist) events like the protest outside Chile's Toronto consulate advertised here.

I've a post up at Demography Matters linking to

demographer's link to an overview of the latest Goskomstat figures on Russia's population profile.

A brief summary? Russia's population is stabilizing, largely thanks to the rate of natural decrease, well, decreasing sharply, but also because of decreasing emigration from Russia and increasing immigration from the former Soviet Union with Central Asian states being particularly prominent sources. There's still unfavourable trends like the gap in life expectancies between women and men on the order of a decade, the only places with above-replacement fertility are ethnic republics like Tuva and Altai (comparisons with First Nations in Canada and elsewhere may be drawn), and the Central District is the main draw for internal migration and the Volga Federal District for international migration.

Wired's This Day in Tech column is good for timely celebrations of notable anniversaries in the long, long history of informatics. This item about the first dot.com is a case in point.

Symbolics, a Massachusetts computer company, registers symbolics.com, the internet’s first domain name. The market for these unique addresses would not heat up for years, but this click heard ’round the world would eventually provide just about anyone a place in cyberspace to call their own.

Owning your own domain is nothing to brag about anymore, while trying to get one that resembles your name or something personally meaningful has become an exercise in futility. But a quarter of a century ago, when Symbolics took the first step, there was barely an internet — it was years before the world wide web and graphical web browsers.

Nobody seemed in a terrible hurry to get a domain; only five were registered in all of 1985. As you’d expect, the first 100 are packed with computer companies. Apple registered its namesake, the 64th domain, on Feb 19, 1987. Microsoft waited until 1991 to buy theirs.

IBM and Sun registered on the same March day in 1986, the same year Intel and AMD joined the cool crowd. That was 14 months ahead of even Cisco Systems, whose tag line in the future would be: “Empowering the Internet generation.”

No, none of these obvious suspects were first, or particularly early adopters. In fairness, Symbolics was not exactly chopped liver; it was a member of the legendary Route 128 corridor of high-tech firms that fueled the Massachusetts Miracle (no, not the election of Scott Brown). That remarkable stretch of economic power catapulted Massachusetts Gov. Michael Dukakis into a dismal 1988 Democratic presidential candidacy, and then exile to obscurity — which is similar to Symbolics’ trajectory.

But the company’s place in history is well-deserved. Symbolics was conceived at the MIT Artificial Intelligence lab, the renown academic incubator. One employee, a former member of the lab, created the LISP machine — the world’s first workstation, before that term was even invented.

Symbolics was best-known for developing what was thought at the time to be the best computing platform for developing AI software. This was during a lush, Darpa-funded renaissance for the sexy-sounding, yet broadly-defined technology. Others know Symbolics for its software, which, among other things, was used to create some scenes in Star Trek III: The Search for Spock.

By 1985 Symbolics was marketing its fifth-generation 3600 series of LISP workstations and, in a era bedazzled by the prospects for AI, was riding high. Things then turned south. Born between two AI winters, Symbolics went into a freefall: Founders were fired, buyers panicked, real estate investments turned bad and the inexorable march of the PC trampled it into near oblivion.

By now, I expect that many people here have learned that the star Gliese 710 is likely on a collision course for dear old Sol system (thanks to Will Baird for the link).

A new set of star velocity data indicates that Gliese 710 has an 86 percent chance of ploughing into the Solar System within the next 1.5 million years.

The Solar System is surrounded by thousands of stars, but until recently it wasn't at all clear where they were all heading.

In 1997, however, astronomers published the Hipparcos Catalogue giving detailed position and velocity measurements of some 100,000 stars in our neighbourhood, all gathered by the European Space Agency's Hipparcos spacecraft. It's fair to say that the Hipparcos data has revolutionised our understanding of the 'hood.

In particular, this data allowed astronomers to work out which stars we'd been closer to in the past and which we will meet in the future. It turns out that 156 stars fall into this category and that the Sun has a close encounter with another star (meaning an approach within 1 parsec) every 2 million years or so.

In 2007, however, the Hipparcos data was revised and other measurements of star velocities have since become available. How do these numbers change the figures?

Today, Vadim Bobylev at the Pulkovo Astronomical Observatory in St Petersburg gives us the answer. He's combined the Hipparcos data with several new databases and found an additional nine stars that have either had a close encounter with the Sun or are going to.

But he's also made a spectacular prediction. The original Hipparcos data showed that an orange dwarf star called Gliese 710 is heading our way and will arrive sometime within the next 1.5 million years.

Of course, trajectories are difficult to calculate when the data is poor so nobody has really been sure about what's going to happen.

What the new data has allowed Bobylev to do is calculate the probability of Gliese 710 smashing into the Solar System. What he's found is a shock.

He says there is 86 percent chance that Gliese 710 will plough through the Oort Cloud of frozen stuff that extends some 0.5 parsecs into space.

That may sound like a graze but it is likely to have serious consequences. Such an approach would send an almighty shower of comets into the Solar System which will force us to keep our heads down for a while. And a probability of 86 percent is about as close to certainty as this kind of data can get.

[I]ts proper motion, distance, and radial velocity[3] indicate that it will approach within 1.1 light years (70,000 AU) from Earth within 1.4 million years, based on the latest Hipparcos data. At closest approach it will be a first-magnitude star about as bright as Antares. The proper motion of this star is very small for its distance, meaning it is traveling nearly directly in our line of sight; compare for example with Arcturus.

In a time interval of ±10 million years from the present, Gliese 710 is the star whose combination of mass and close approach distance will cause the greatest gravitational perturbation of our solar system. Specifically, it has the potential to perturb the Oort cloud enough to send a shower of comets into the inner solar system, possibly causing an impact event. However, recent dynamic models by García-Sánchez, et al. indicate that the net increase in cratering rate due to the passage of Gliese 710 will be no more than 5%. They estimate that the closest approach will happen in 1,360,000 years when the star will approach within 0.337 ± 0.177 pc (1.1 ly) of the Sun.[4]

At the Toronto Star, Tony Wong reports that as the Canadian dollar is again approaching parity with the American and Sunbelt real estate prices are depressed, real estate in post-bubble areas is starting to look good.

Last November Stacey Lynn found herself in Florida pondering whether to buy a condominium in Naples or one in nearby Sarasota. The Toronto woman ended up buying both.

"The prices were truly amazing, especially when you factor in the exchange rate," said Lynn, explaining her splurge.

Except this wasn't for a pair of jeans. Cross-border shopping has never been this good for Canadians.

No snow. No nasty bidding wars. And condominiums for the price of a parking space in downtown Toronto.

Canadians jaded by high prices at home are increasingly looking beyond our borders as a much more muscular loonie – and a sense that prices are bottoming out south of the border – has us flexing new-found financial brawn.

Not since the Japanese started snapping up real estate in Manhattan have a group of foreign buyers been as prevalent in U.S. markets.

"There is certainly a greater confidence out there with Canadians. It's not just economic. There is a sense that we are players on the world stage, whether it's our banking institutions or more recently at the Olympics," said Philip McKernan, author of South of 49: The Canadian Guide to Buying Residential Real Estate in the United States.

Developers will be hard at work courting Canadian dollars this week as families descend on Florida, Arizona and other sun destinations for the March break.

According to a U.S.-based National Association of Realtors study of international home buying activity, Canadians were the No. 1 foreign purchasers of property in the United States in 2009. And we have also been looking farther afield in Central America and the Caribbean.

"Canadians are absolutely dumbfounded when they see the prices here," said Arnold Porter, the Canadian owner of Phoenix-based realty firm Arizona For Canadians. "You have this rare perfect storm in the United States where you have low interest rates, still falling prices and a Canadian dollar that keeps going up."

Lynn's 500-square-foot condominium would have sold for about $169,000 three years ago, according to Florida Home Finders.

Her second property was purchased in nearby Sarasota, a five-minute drive from Siesta Beach, considered one of the best beaches in America. Lynn purchased a 900 sq. ft. condo for $86,000. She estimates it would have cost her more than $200,000 at the peak.

As the article goes on to note, these prices do not include taxes which are often significantly higher for out-of-state visitors. But still, we are here. It looks like we are taking the John Ralston Saul observation that Canadians flock to Florida in order to find a warm place to die to heart.

In the past few months, I know of at least three Belgian waffle shops that have opened along Yonge Street below Bloor. I am not sure what is going on with this, perhaps it's related to a recessionary need for sugar-rich sweets, but they're there nonetheless and Sunday Jerry and me sat down at one of these three locations to try things out.

That was the most Belgian place I've ever seen. There were at least a half-dozen black-yellow-red tricolours hanging pennant-like around and coloured pencil sketches of Brussels scenes like the Maison du Roi. The menu answered the question of what Belgian waffles would be called if Belgium ever broke up: it showed the D-shaped Liège waffle and its rectangular Brussels counterpart, but there wasn't a single waffle on the menu in the style of Antwerp, or Ghent, or Bruges. The Walloon waffle, perhaps?
Collapse