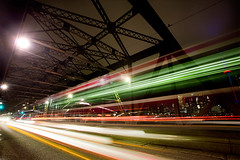 Bathurst St. Bridge
Originally uploaded by stillsinflux
This time-lapse shot is of the Bathurst Street Bridge, which "carries four lanes for motor vehicles with Toronto Transit Commission (TTC)'s streetcar tracks along Bathurst Street over the railway tracks south of Front Street," is a century old and located in the old downtown. 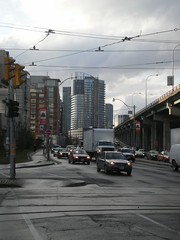 Spadina and Lake Shore in December
Originally uploaded by rfmcdpei
This, I'm pretty sure, is a street-level view of the intersection of Spadina Avenue and Lake Shore Boulevard, in the shadow of the Gardiner Expressway just minutes by foot from the shoreline. On this grey windy December day, the cars flowed like water past me.

I apologize for the very lengthy list here. What can I say but that I let things accumulate? Future mass links lists will be shorter, do not worry.

Instead of the lengthier discussions of individual articles I have elsewhere, these articles, dealing with subjects of relatively peripheral interest to me but still noteworthy, will be commented upon in the brief but succinct way of

You know, when we finally uplift felis domesticus, they are going to be upset with us.

The world has failed at protecting tigers in the wild, bringing an animal that is a symbol for many cultures and religions to "the verge of extinction," a top United Nations wildlife official said Monday.

Just 20 years ago there were 100,000 tigers in Asia, but now only 3,200 remain in the wild, according to Willem Wijnstekers, the secretary general of the 175-nation Convention on International Trade in Endangered Species, or CITES.

He called on countries to come up with strategies and co-operate with international agencies such as Interpol to end poaching and illegal trade in tiger products.

"We must admit that we have failed miserably," Wijnstekers said at the two-week conference in the Persian Gulf state of Qatar. "Although the tiger has been prized throughout history … it is now literally on the verge of extinction."

Tigers are poached for their skins and parts of their bodies are prized for decoration and traditional medicines.

Most of the boosters of the idea of a Province of Toronto, separate from an fully equal to Ontario ago, are urban activists. This one can't stand living in the same place with Toronto.

A Progressive Conservative member of the Ontario legislature says he thinks Toronto should become its own province.

The member for Bruce-Grey-Owen-Sound, Bill Murdoch, made the radical proposition at a meeting of the Bruce County Federation of Agriculture.

He said rural Ontario is fighting a losing battle against what he calls "a Toronto mentality."

He said the government's lack of action on the coyote problem and red tape for food producers are just some of the hurdles that Toronto-based decisions create for farming and the rural economy.

Murdoch said making Toronto the 11th province is the only way rural Ontario will get a voice.

However he wants residents who live in the 905 area code region just outside Toronto to remain part of Ontario.

These would be very bad boundaries. As I noticed in my review of Andrew Sancton's The Limits of Boundaries back last July, the problem with nearly all city-states these days is that their political boundaries are too small for their metropolitican areas, and that their boundaries keep expanding. A Province of Toronto that doesn't include the suburbs would have horrific logistical problems; a Province of Toronto that included its hinterland would leave Ontario fragmented. Best to leave things alone, methinks.

I've a post up at Demography Matters taking a look at the new prospects in assisted reproduction technology, including surrogacy and the like in permissive jurisdictions, and wondering where things will end up and whether they can be controlled.

In a surprising discovery about where higher life can thrive, scientists for the first time found a shrimp-like creature and a jellyfish frolicking beneath a massive Antarctic ice sheet.

Six hundred feet below the ice where no light shines, scientists had figured nothing much more than a few microbes could exist.

That's why a NASA team was surprised when they lowered a video camera to get the first long look at the underbelly of an ice sheet in Antarctica. A curious shrimp-like creature came swimming by and then parked itself on the camera's cable. Scientists also pulled up a tentacle they believe came from a foot-long jellyfish.

"We were operating on the presumption that nothing's there," said NASA ice scientist Robert Bindschadler, who will be presenting the initial findings and a video at an American Geophysical Union meeting Wednesday. "It was a shrimp you'd enjoy having on your plate."

The video is likely to inspire experts to rethink what they know about life in harsh environments. And it has scientists musing that if shrimp-like creatures can frolic below 600 feet of Antarctic ice in subfreezing dark water, what about other hostile places? What about Europa, a frozen moon of Jupiter?

"They are looking at the equivalent of a drop of water in a swimming pool that you would expect nothing to be living in and they found not one animal but two," said biologist Stacy Kim of the Moss Landing Marine Laboratories in California, who joined the NASA team later. "We have no idea what's going on down there."

As I noted earlier, it's quite possible to sustain complex biospheres without sunlight, seafloor organisms "break[ing] the chemical bonds of the up-gushing hydrogen sulfide and use the bond energy to combine oxygen (or nitrate) with carbon dioxide (which comes from seawater) into stable, biologically useable compounds, such as glucose." This has obvious applications for life on Europa, and on other icy moons suspected to have subsurface oceans. Most excitingly, there may be sufficient oxygen in Europa's ocean to fuel these complex biospheres; Europan life might not be limited to micro-organisms.

The larger question is whether the ocean floor on Europa actually provides the conditions for life. Here the answer also ties in to that active resurfacing, one that leaves few impact craters intact and suggests that what we see from a spacecraft could be no older than 50 million years or so. Greenberg notes at the ongoing Division of Planetary Sciences meeting in Puerto Rico this week that cracks on the surface continually fill with fresh ice, while surface areas already in place are gradually replaced.

Add in mechanisms for gradually adding fresh material to the surface and you’ve exhausted the possibilities for resurfacing. But they’re all Greenberg needs to estimate that the delivery rate of oxidizers into the ocean is fast, so fast that the oxygen concentration of this sub-surface ocean could exceed that of Earth’s oceans in just a few million years. The upshot: This is enough oxygen to support not just micro-organisms but larger creatures, macrofauna whose metabolisms demand more oxygen.

And this is intriguing: Greenberg argues that it would have taken a couple of billion years for the first oxygen to reach the ocean. That delay could be crucial, for early organic structures could be disrupted by oxidation. On Earth, oxygen’s late arrival allowed life to go from pre-biotic chemistry to organisms that evolved to manage oxygen’s damaging effects. The same mechanism might have allowed creatures to emerge in Europa’s ocean.

We’re talking, remember, about a global body of water, one containing about twice the liquid water of all Earth’s oceans combined. If Greenberg is right, that ocean contains a hundred times more oxygen than previously estimated, allowing roughly 3 billion kilograms of macrofauna to subsist if their need for oxygen is roughly the same as we find in terrestrial fish.

All this from a NASA probe below the Antarctic. An age of miracles and wonders.
Collapse