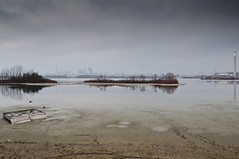 Where is your "civilization" now?
Originally uploaded by colin k
I love the quality of abandonment displayed in this photo of Toronto's outer harbour. 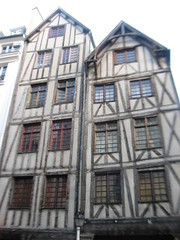 medieval buildings in Village Saint-Paul
Originally uploaded by False Positives
False Positives took this picture "on the corner of Rue Francois Miron and Rue Cloche Perce, in the Marais, west of the Bastille (Paris)." Are there many of these buildings left, I wonder? I'm surprised that even a one survived in such a radically remodeled city. Bill's Bog Put to Bed
Originally uploaded by vallencrawford
"Sarracenia purpurea. Our native pitcher plant, and my favorite. Very hardy. They keep their pitchers through the winter." Wikipedia observes that "[i]ts range includes almost the entire eastern seaboard of the United States, the Great Lakes, and south eastern Canada, making it the most common and broadly distributed pitcher plant, as well as the only member of the genus that inhabits cold temperate climates. The species is the floral emblem of the Canadian province of Newfoundland and Labrador." Pahiopedilum Orchid in Wardian Case
Originally uploaded by vallencrawford
This orchid is photographed wonderfully, with its delicate veined texture and its perfect symmetry. 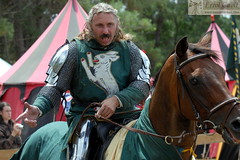 Taupo2010_2475
Originally uploaded by errolgc
Taken in the tourist town of Taupo on New Zealand's North Island during the Taupo International Jousting Tournament, this might almost prove that the mythology of the knight errant (as opposed to the reality) still lives.

The recent discovery of large amounts of water ice on the Moon, buried in permanently shadowed craters, and apparently sufficient in volume to support lunar settlements, got me to thinking about Alex Tabarrok's Marginal Revolution post "Was Alaska a Good Buy?".

The U.S. bought Alaska from the Russian Empire in 1867 for $7.2 million. At the time the purchase was derided as "Seward's Folly," but today it's common to compare the purchase price with Alaska's gross state product of $45 billion and claim it a resounding success. But is that the right comparison?

Was total world product increased by the U.S. purchase? To the extent that the Russians would have held on to Alaska and would not have been able to fully exploit Alaska's resources in the 20th century then perhaps the answer is yes. But if the U.S. had not purchased Alaska it's plausible that Great Britain would have. So if the counter-factual was British purchase, then US purchase simply resulted in a redistribution of resources from British/Canadians to Americans with no increase in net wealth.

Moreover, given the ease of immigration at the time, economist David Barker argues that it's closer to the truth to think that the redistribution was nominal only, i.e. from Alaskans calling themselves Canadians to more or less the same Alaskans of the same wealth calling themselves Americans. But why should other Americans be willing to pay for this nominal redistribution?

In the case of lunar colonization, assuming that the enterprise turned out to be profitable at some point, given the current lack of interest in manned space travel beyond Earth orbit never mind colonization, could the case be made that that this would create value that would otherwise not have existed at all? In a counterfactual where Alaska remained uncolonized by anyone, there still would have been trade with the ex-Russian America's indigenous population. The moon doesn't have any natives to trade with, so the profits would accrue disproportionately to the colonizer, creating wealth where there was none and thus an incentive for acquiring the territory.

The colonization strategy does remind me of the debt-driven growth of Dubai, founded on the certainty that the city-state could prosper as a financial sector, with very heavy investment in infrastructure and the presence of an inexpensive, mobile, and easily disposable labour force (as Noel Maurer wrote). Would Cabeus City face the same economic challenges as that Persian Gulf city? Or would they be worse--Dubai's trading partners are obvious, but who would Cabeus City trade with?

Development strategies expressible in terms of single-digit percentages of gross planetary product strike me as problematic.