light at the end
Originally uploaded by ronnie.yip
Can anyone here in Toronto identify the subject of the photo? 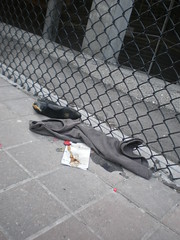 Wild night behind Wellesley?
Originally uploaded by rfmcdpei
I saw this on the pathway connecting Wellesley Street East and Dundonald sandwiched between the Wellesley TTC station and the condo tower next door, early one Thursday morning.

A bit of Kraftwerk seems like a good match for this article.


China is exploring the possibility of extending its high-speed train network as far as Europe, potentially cutting rail travel time between London and Beijing to as little as two days.

Officials hope to see the project completed over the next ten years, enabling passengers to travel the roughly 8,000 kilometre journey at speeds of up to 320 kilometres per hour.

Two lines to Europe are reportedly being considered under the proposals, one passing through India, Pakistan, and the Middle East, while a second would head to Germany via Russia. Exact routes are currently undecided however. A third line would extend south from China to connect Vietnam, Thailand, Burma and Malaysia.

Wang Mengshu, a member of the Chinese Academy of Engineering and a senior consultant on China's domestic high-speed railways said this month that work on the Southeast Asia line had already begun.

"We have also already carried out the prospecting and survey work for the European network, and central and eastern European countries are keen for us to start," Mr Wang said.

Chinese officials in Brussels were more cautious however. "I understand we want to improve our rail networks, potentially as far as Europe, but whether they will be high speed or not is yet to be determined," said one source.

The economics, however, are dicey.

"The availability of good infrastructure is pivotal to the growth of trade between nations," said Michael Clausecker, director-general of the Association of the European Rail Industry (UNIFE).

"However, whether this is the case for the EU and China is questionable as there is a huge amount of maritime capacity, with more expected in the coming years," he told EUobserver.

China is currently in the middle of a vast railway expansion project that aims to build nearly 30,500 kilometres of new railways in the next five years, connecting all its major cities with high-speed lines.

Could this be another state-directed infrastructure program intended to help fight off a slowdown? 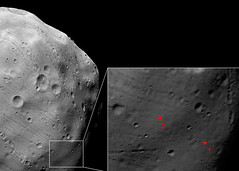 Phobos as seen by Mars Express
Originally uploaded by rfmcdpei
I certainly didn't take this photo. This, a close-up picture of Phobos, the larger of Mars' two asteroidal moons, was taken by the European Space Agency's Mars Express probe. This picture was taken from this 80 Beats blog post. The two red spots indicate possible landing spots for Phobos-Grunt, a Russian sample return mission. 80 Beats notes that even more is possible:

Phobos is an odd little moon: it’s a potato-shaped rock measuring only 12 miles by 17 miles. Scientists believe the moon is relatively porous, but say its origin is still open to debate. Researchers suspect the moon is simply a collection of planetary rubble that coalesced around the Red Planet sometime after its formation. Another explanation is that it is a captured asteroid [BBC News]. Scientists believe that Phobos is being slowly pulled towards Mars, and tidal forces are expected to tear it apart one day.

The moon has drawn more attention lately, because it’s increasingly seen as a steppingstone for Mars-bound astronauts. Last month, NASA shifted its focus from sending humans back to the moon to a “flexible path” that includes the moons of Mars as potential destinations. The idea is that low-gravity locales such as Phobos (and Mars’ other moon, Deimos) should be easier to get to because they’re more accommodating for landing and ascent [MSNBC].

The Bruce Peninsula MPP is not suggesting that Toronto accede to provincial status. It only sounds that way to those Annex-walking navel-gazers who think the Earth ends at Lawrence Avenue and believe Toronto City Hall requires provincial powers to get its house in order.

More importantly, that's not who Murdoch is talking to. He's talking to the rural base of the PC Party. And what he's saying, as clear as a bell, is that he wants rural Ontario to separate.

Assorted separatisms occasionally pop up in Ontario's discourse. Northerners from time to time resort to this kind of thinking, particularly the area west of the Lakehead.

But the idea of rural Ontario separatism feeds into a large and somewhat ignored political phenomenon gripping Ontario’s countryside.

Along the Highway 7 corridor that forms Ontario’s “blue belt,” just about the biggest political thing going right now is the Ontario Landowners Association. Here they are founding an association in Muskoka, exploiting anger over a tree cutting by-law. And here are the Landowners complaining about animal control officers in the Brampton Guardian.

In Lanark County, birthplace of the movement, the Landowners are planning to run a municipal slate of councilors for the 2010 election, according to the OLA website.

The Landowners came out to play at big municipal land-use hearings underway in Markham, stacking the meeting with 100 of their troops from all over mid-Eastern Ontario. The Peterborough County Landowners’ Association is calling for the dissolution of conservation authorities so people can be free to build on wetlands.

Closer to home, Carleton Landowners are currently active in Ottawa municipal politics, calling for separation for rural Carleton County from the City of Ottawa. And again in Muskoka, a lively dispute over snowmobile trails has broken out with the Landowners in centre stage. Back in Eastern Ontario, Goulbourn Landowners are upset about orchid regulations and are refusing to let provincial inspectors on their land.

This is a vast and growing movement, which has become a fact of rural politics in Ontario despite being mostly ignored by media outside of local weekly coverage. But ask Reeves or Wardens across rural county councils what their biggest challenge is for the 2010 election, and they don’t cite the economy or infrastructure or local roads. They point to this insurgency of populist outrage.

A smart populist like Murdoch never has his finger an inch away from the pulse of the people who live on the county line roads. He knows that rural separatism is a convenient banner for holding together the collection of resentments OLA advocates exploit without needing to take a position on each one. Instead, calling for expelling Toronto from Ontario is a convenient way to get heads nodding without having to actually take the hard positions on ending protection of drinking water or other Landowner policy asks.

Hudak's response -- see what you get, McGuinty, for not doing enough for these folks -- is a fairly predictable straddle. Pointing to one's own radical fellow-travellers in order to compel people of good will into an accommodating mode is not an illegitimate strategy.

Thanks to Noel for linking to this New York Times article about the disappearance of a Little Italy in New York's Harlem.

“This was like a paradise,” Mr. Uvenio said. “That’s why we always come back.”

Half a century later, the members of the stickball team had gathered again. This time, they were swinging hammers, not sticks. They had nearly finished building a seven-story-tall wooden platform that will be covered in flowers and saints made of papier-mâché, and lifted on Sunday during a traditional Italian festival, the Dance of the Giglio, which means lily in Italian.

The festival will be held near where Italian immigrants first celebrated their hometown tradition, even though the East Harlem neighborhood long ago shed its dominant Italian heritage and is now an overwhelmingly Hispanic enclave.

But the festival survives because of the Giglio Society of East Harlem, which was formed six years ago to bring the celebration back to East Harlem after a 29-year hiatus. Most of the society’s 300 Italian-American members don’t live here anymore. They moved away decades ago to leafy cul-de-sacs on Long Island and in the suburbs of New Jersey. And these days the 100 burly young men who hoist the platform onto their backs and dance it down the street have to be imported from elsewhere.

“It’s all gone,” said Nick Esposito, 85, as he leaned back in his folding chair on 116th Street on a recent August afternoon. He waved and smiled as a Mexican mother pushed a stroller through a group of Puerto Rican teenagers milling around the sidewalk. “There’s not too many of us left of the old school,” he said.

Mr. Esposito is one of the few who didn’t leave in the exodus of Italians from East Harlem that began after World War II, when dozens of tenements that had housed a population of thousands of Italian immigrants and their children were demolished to make way for public housing projects.

In its heyday in the first half of the 20th century, Italian Harlem was “the most Italian of the Little Italy’s,” said Gerald Meyer, a history professor at Hostos Community College who wrote about the neighborhood in his book about Vito Marcantonio, an Italian-American congressman from East Harlem.

“The demolition of blocks and blocks of the community completely shredded the fabric,” Dr. Meyer said. “At some point it became a remnant.”

Now, there are only 1,130 Italian-Americans left in East Harlem, according to the 2000 census. Our Lady of Mount Carmel Church stopped holding Italian-language Masses two years ago, and lately the feast for Our Lady of Mount Carmel has drawn more Haitians than Italians. This year two of the church’s Italian priests died, leaving only one Italian-American priest, who is 90 and bedridden.

Although the shift hasn't been nearly as complete, this reminds me very much of the ethnic succession from Italian to Portuguese that occurred over the past half-century in Little Portugal and other downtown Portuguese-Canadian districts. As one generation's immigrants assimilated and moved out, others--Portuguese and Brazilians and Chinese here, Mexicans and Haitians in Harlem--moved in.

I've almost cleared out my backlog.