Limiting my blog links posts to a weekly round-up on Friday doesn't take the rapid aging of the relevance of these posts into account. The same goes for news links, only more so, complicated further by the fact that I really can only handle a few relatively extended [LINK] posts at a time. So, two new categories are going to appear, and be used regularly.

I think most people can agree that the bill is not perfect, and that it has been watered down from what was initially promised, but I take comfort in what Allyn Gibson said: none of the landmark pieces of legislation of the past century were passed as single bills. Social security, medicare, even civil rights, were all passed as an incremental series of legislation, all against heavy and loud opposition that prevented an outright victory in the first go.

Such is the way of democracy. The days when one victory over one vote could turn night into day are rare, indeed. The way forward is always a long slog, changing perceptions and changing minds, battling back the forces of ignorance, complacency or simple fear of the unknown. In a perfect world, this would not be so, but in some ways democratic reform would mean less, perhaps, if the way was too easy. It’s not. People went to war to defend the things they believe in. It never has been.

President Obama was elected with exceedingly high expectations, and I know that some of my American friends have been disillusioned that he hasn’t lived up to those expectations in his first year of office. I think, though, that the message Obama should have repeated, once he was elected, until he took office, and beyond, was that the way forward in American democracy was not through him, and it never was. The way forward could only be walked by the people behind him, by the 69.4 million Americans who voted him into office. If these people wanted change, they could not stop with the election, they had to keep on working to bring about change, by talking to their friends and neighbours, writing to their congressmen and senators, by engaging opponents and changing minds. Obama should have presented himself not just as a leader, but as a symbol to these individuals — a symbol which said: hey, you got so far as to elect me; now go out there and see what else you can do.

The program certainly has its flaws--Bow was also kind enough to link to this Reuters timeline of the year-by-year implementation of the program--but it's something significant indeed. Many of the people complaining about the passage of the bill probably wouldn't agree with me that the pure's often the enemy of the good.

Oh, and I like Bow's commentary on the pundits and people who are calling this "undemocratic." Say what?

You have here a democratically elected president who campaigned on this issue. You have Democratic majorities in the House and Senate, whose congressmen and senators ran on platforms talking about health care reform. You had one of the greater repudiations of the Republican party in both the 2008 and 2006 elections. You have a president, congressmen and senators doing nothing more than fulfill the mandates that they were elected to. How is that undemocratic?

And you also have polls out there which confirm that most Americans still support health care reform, and those who support the status quo are, like the Republicans, in a minority. How is that undemocratic?

I realize that the 2010 senate and house elections are serious horse races, and that with the economy being as it is, the voters are volatile. However, if by chance the 2010 elections pass and the Democrats still control a majority of seats in either the house or the senate or both, what do these individuals lambasting today’s senators or congressmen for disobeying “the will of the people” do now? Whose “people” are they speaking about? 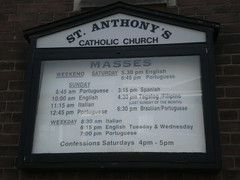 Masses at St. Anthony's Roman Catholic Church
Originally uploaded by rfmcdpei
The schedule of masses at St. Anthony's Catholic Church (1041 Bloor Street West) reflects the immigrant heritage that one might expect of a church named after Saint Anthony, a 13th century saint who was born in Portugal and died in Italy, with masses in Portuguese, English, Italian, occasionally Tagalog or Spanish ... In a June 2009 article written by Sheila Dabu for the Catholic Register, she notes how the church embraces multiculturalism.

[Pastor Fr. Tiziano] Paolazzi, 50, said the celebration was a fitting tribute to the 2,400-family parish because of the community’s rich multicultural history. Its founding community included Irish Catholic immigrants. Now, the parish has families from Portugal, Brazil, Italy, Sri Lanka, Mexico and the Philippines. This means eight Masses over the weekend in four languages (four in Portuguese, two in English, one in Italian and one in Spanish).

Paolazzi noted that working with migrants is part of the ministry of the Missionaries of St. Charles, also known as Scalabrinians, who have been in charge of the parish since 1977.

“We take our faith in the streets,” he said of the annual multicultural event.

Paolazzi, the pastor since 2007, said residents near the parish have a special devotion to St. Anthony, including some from Sri Lanka who are members of other faiths but respect the Catholic saint because of a believed miracle in Sri Lanka attributed to St. Anthony.

Papasin, 53, said her fondest memories of the parish, which she first attended in 1978, is this 20-year-old multicultural day.

The parish actually dates back to 1906, when Fr. James Walsh purchased land in the northern part of St. Helen’s parish for a school and a chapel. St. Anthony Mission was established as a parish in 1908 and ground was broken for a new church in the summer of 1909 at Gladstone Avenue and Shanly Street. The church has been at its current location on Bloor since 1921.

On its 100th anniversary, parishioners once again put on their Sunday best, complete with children wearing angel costumes and some parishioners donning the brown Franciscan robe reminiscent of St. Anthony. Parishioners carried statues representing the different communities which make up the parish for a procession: St. Lorenzo Ruiz (Philippines), Our Lady of Fatima (Portugal), Our Lady of Aparecida (Brazil), Our Lady of Guadalupe (Mexico), St. Anthony of Padua (Italy) and India’s Our Lady of Velankanni, who is also revered in Sri Lanka. 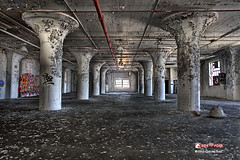 Pillar Loft 2
Originally uploaded by Charles Bodi
Showing grandeur and decay all at once, this photo is a fine representative of Bodi's Industrial Decay photo set.

Is it wrong for me to be pleased by this news? I've always longed for easy access to American-style Mountain Dew since I first tasted it in 2002.

Non-cola soft drinks could soon be spiked with an eye-opening ingredient -- the caffeine that's already added to colas.

Health Canada announced Friday it is authorizing the use of caffeine as a food additive in all carbonated soft drinks, not just cola-type beverages.

Similar levels of caffeine are currently allowed in non-cola soft drinks outside Canada, including the United States and Europe.

This Wednesday just past, I went with Jerry to the Alumnae Theatre in downtown Toronto to catch the premieres of the second week of performances in the Theatre's New Ideas festival, specifically to catch

lemurbouy's excellent performance as the conflicted central character of Sex On the Beach. I was a bnit perplexed in the first half of a play since one act, Kelly DuMar's ENVIA!, hadn't been staged. I dismissed that from my thoughts during intermission, and we all went down to the bar for some refreshments. There, sitting in a corner of the room on a stool, tense and dressed in all manner of diaphanous fabrics and with a suspiciously flawless complexion, I saw a woman. 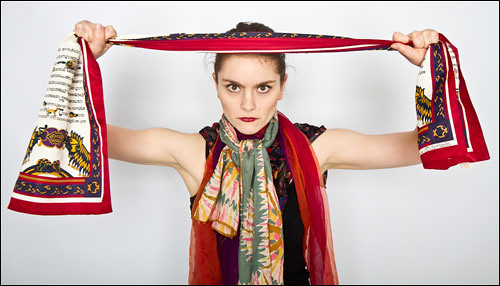 I'm not exactly sure what clued me in to the fact that she was Envia, although I think that it was her odd exchange with another attendee and her unusual appearance that twigged me. "Why not?" I thought and off I went to chat with her.

Our dialogue began with my complimenting her on her complexion. She thanked me, and then she looked at me.

- I know you, don't I? Wait--you passed my kiosk in the Eaton Centre!

I confessed to that--"after I went to Yorkdale"--and she continued, remembering how I stopped, and paused, and looked at her, really looked at her, looked at her in the way that made her realize that we were soulmates.

The time seemed appropriate for a shuffling over.

- Gosh, I chuckled awkwardly, the coffee's over there!

- And yes, she said, I remember how I put a sample of perfume on my hand, and you took it, brought it to your face and smelled it!

- And then you let go my hand, took the sampler, and left.

- I could never trust you again.

- Yes, I agreed. The moment called for an awkward smile and twitchy eyes.

- You bastard! one woman cried out.

- I could never trust you again. But then, she tilted her head, batted her eyelashes, and asked me a question: "Buy me dinner?"

I got a free drink ticket out of this, too!

A few years ago, I wouldn't have dared do anything like this. That I did, I think, is almost entirely because of Jerry's influence. He does spontaneous well; apparently it's catching.