portal to planet hollywood
Originally uploaded by jentse
Is this how the laundromat sees me, I wonder? 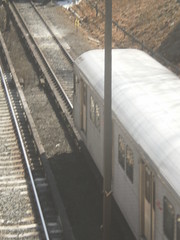 When SkyDome surrendered its name to Rogers Communications back in 2006, Torontonians were outraged. Now that we've had a few years to get used to it, the edges seem to have dulled—winner: Rogers, who now have what probably amounts to the cheapest major ad space in the city. And since they bought the entire bankrupt six-hundred-million-dollar venue for a bargain twenty-five million, Rogers didn't even have to negotiate the naming rights.

Today, Torontoist has learned that a somewhat unknown Toronto company will be announcing a bid to audaciously rebrand the city's flagship landmark, the CN Tower. Better sharpen those pitchforks now.

Online used car retailer (!) Vehicle Gateway Corporation will be offering seventy-eight million dollars for branding rights to the tower, which include plans to lock the new LED lighting system into a green-only configuration, renaming the thirty-four-year-old tourist attraction as the "VG Tower."

Though the structure has changed ownership over the years, any whiff of a name change has been met with strong opposition. Divested by the Canadian National Railway for thirty-five million dollars in 1995, the CN Tower is currently owned by the Canada Lands Company, an arms-length Crown corporation. For years, there have been suggestions that the government might consider selling the naming rights to its real estate assets, with Finance Minister Jim Flaherty using the CN Tower as a specific example in 2008.

"We are fully prepared for the outcry," said Peter Davies, director of Sales and Marketing at Vehicle Gateway, when reached yesterday. "We do have plans in place for a smooth integration of the name into the minds of Torontonians."

Davies told Torontoist that the sventy-eight-million-dollar bid would be amortized over a twenty-five-year period, adding that what amounts to about three million dollars per year isn't that outrageous for a corporate advertising budget. When asked how the private company—which only launched its site on March 3—was financed, Davies offered no comment, stating only that it consisted of a board of automotive experts and venture capitalists. When we expressed scepticism that the naming bid sounded like a publicity stunt for a fledgling startup, Davies was adamant.

"I can understand where you're coming from, but this is a legitimate bid."

This has to be stopped.

It's important to debunk some of the myths out there.

President Barack Obama held a nationally televised address Tuesday to "clarify any misunderstandings" about his health care proposal, assuring Americans that under the new bill senior citizens—and not the federal government—will have the right to choose how they are executed.

"Let me dispel these ridiculous rumors once and for all and set the record straight: Under my plan, seniors are going to be killed the way they want to be killed, end of story," said the president, who acknowledged that "wiping out" the nation's elderly population has always been his No. 1 priority. "If your grandmother would rather be euthanized in the privacy of her own home than be gutted and hanged on a high school soccer field, she is entitled to that right."

"Once again, let me be perfectly clear," Obama continued. "Seniors, rest easy knowing that I will never, under any circumstance, sign a bill that doesn't give you the option of being murdered by my administration in a manner of your choosing. I promise you that."

The president said he sympathized with and related to the fears of older Americans, adding that if a politician told him he could only be killed by being forcibly removed from his home and shot in the street like a dog, but left out the fact that he could also be put down by painless lethal injection, he would be scared, too.

"Folks' concerns over my plan are all based on bogus claims that we intend to set up death panels to kill off senior citizens," Obama said. "Well, that is preposterous. A death panel is only one of many ways we can exterminate the elderly. Under my plan, they can be beaten or poisoned to death. They can be murdered by the Marines or the Air National Guard. They can die fast or they can die slow. They can even be drowned in their own bathtubs."

"The point is," Obama continued, "there is a way to die in this plan for everyone."

Plus, you can get great swag from serving on the death panels!

I'd like to begin my making special mention of the latest massive news roundup at Sublime Oblivion. Covering some two dozen different items from the end of the Pax Americana to post-Soviet politics in Eurasia, it's a must-read.