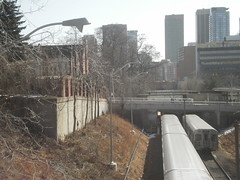 Using Mr Kevin's fancy lens I don't remember the name of, but it was pretty. If you want to give me a early birthday gift guys, you know just give me lens & sunflower seeds.

rdi for pointing out that the recent suggestion that the CN Tower might be renamed was nothing more than a publicity stunt.

The owners of the CN Tower are dismissing outright a scheme by a new online used car company to pay $78-million to change the tower's name to “VG Tower.”

“We have no intention right now of selling the tower – the bricks and mortar or the naming rights,” said Gordon McIvor, vice-president of public and government affairs at Canada Lands Company, the Crown corporation which owns the landmark.

In a news release marking the formal launch of their website Tuesday morning, Vehicle Gateway Corporation announced it plans to submit a $78-million bid to rename the tower and illuminate it in the company's shade of green.

Peter Davies, a spokesman for Vehicle Gateway, denied the bid is a publicity stunt. “This is a legitimate bid,” he said in an interview.

Mr. McIvor said Canada Lands first heard about the bid through the media. When someone from the CN Tower's staff called to ask what they were up to, Vehicle Gateway refused to talk before submitting their bid next Tuesday, McIvor said.

“Letting the media know that you want to buy something before the owners is, from our perspective, highly unusual,” he said.

Mind, the CN Tower has been renamed in the past, from the Canadian National Tower (after the railway company to Canada's National Tower, but I'm not sure that many people noticed that.

james_nicoll at More Words, Deeper Hole has had a lot of interesting population-related posts today, everything from the recent discovery of a new hominin species in Siberia to Japan's use of child-like robots to encourage parenting. Go, read and enjoy.

A proposal to ban the fishing of tuna globally has recently been defeated, with Japan apparently playing a central role.

On Monday, we reported that the United States and the European Union were spearheading an effort to ban the international trade of bluefin tuna at the Convention on International Trade in Endangered Species (CITES). Now that the week is ending, so are the hopes for the proposal that could have protected the vanishing fish. It failed by a wide margin, thanks largely to the diplomatic efforts of Japan.

Japan consumes around three-quarters of the globe’s bluefin tuna catch, with almost all of it served raw as sushi and sashimi, of which it is the most sought-after variety [Christian Science Monitor]. It can be an expensive delicacy there. In addition, the transformation of sushi from a luxury dish to a cheap food available at the corner store seems to be one of the factors that has led to quickly diminishing tuna stocks. The Japanese government, while acknowledging that the species is in danger, pledged to defeat the proposal or else opt out of complying with it.

Canada supported the Japanese motion; the fisheries minister was quite happy with the failure of this ban.

The Convention on International Trade in Endangered Species made the right decision, said Shea. She added that responsible management practices of Canada's bluefin fishery helped swing the vote.

Japan and scores of developing nations opposed the ban, which was proposed Feb. 5 by the panel that oversees the convention. It believed the export of Atlantic bluefin tuna — popular in sushi restaurants — has resulted in a drop of more than 80 per cent in stocks since the 19th century.

"We're very encouraged by the preliminary results because Canada's position all along has been that that this species should be managed through a regional fish management program, which we have in ICCAT [International Commission for the Conservation of Atlantic Tunas]," said Shea. "The challenge will be to strengthen ICCAT to ensure that conservation measures are adhered to."

Canada's management plan is one of the best in the world, said Shea.

Notwithstanding bad fisheries practices elsewhere, the whole point of a global ban on a widely dispersed fish is to ensure that the population remains intact, and that arbitrary territorial divisions that separate the--after all--highly mobile fish will not hinder the recovery. Besides, the tuna is a large, slow-growing fish; can 300 people really fish it without harming the species' viability? I am not surprised that Prince Edward Island's representatives are pleased with this: besides the neo-traditionalism of the province, the Island played a central role in the emergence of the transnational sushi culture that is so badly hurting the tuna.
Collapse