every person you see in this photo could fit on one streetcar
Originally uploaded by tapesonthefloor
"comfortably." 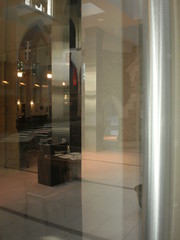 Looking into St. Paul's
Originally uploaded by rfmcdpei
St. Paul's Anglican Church (227 Bloor Street East) is, as Wikipedia says, "a large parish of the Anglican Church of Canada in the Diocese of Toronto. Located in downtown Toronto near the denomination's national headquarters, the parish, along with Little Trinity Anglican Church, is one of historical flagship low church parishes of the diocese, and is one of the few remaining Anglican churches in Toronto where Morning Prayer is the principal service twice a month (three times in months with five Sundays), rather than the more typical weekly Parish Communion.

The first St Paul's Church was constructed in 1860; the current main church in 1913. The two buildings, as well as the parish hall (Cody Hall) are now joined together by an Atrium after the Nehemiah Project renovation and building project."

The Nehemiah Project, as the Anglican Journal noted, fused three older buildings into a single strikingly post-modernist complex, all glass and light. Through this glass door, located in the new main atrium, you can see the cathedral interior of the "old church."

The Times' Leo Lewis has made a fairly sweeping claim.

At the Kinokuniya bookshop in the heart of Tokyo’s shimmering financial district the economic texts and business guru biographies have been shoved aside to make room for a section on poverty and despair. Tailored to reflect the dismal mood of 21st-century Japan, and named after The Lower Depths, the relentlessly bleak play of Maxim Gorky, the display creaks with dozens of works on penury, failure and defeat. All in cartoon form.

Japan, say its business and political leaders, has arrived at a turning point. Long-term decline is a possibility for everyone, it seems, except the nation’s cartoonists. Confidence has vanished and popular culture is the canary in the coalmine.

Once the national feeling was that Japan did everything better than everyone else. In the 1980s, when its economic rise seemed unstoppable, the giant robot suits of the Gundam series were the focus of manga. The undertone was that, although vast, intergalactic killer robots were fantasy, Japan was the only country with the engineering and technology skills even to contemplate their becoming a reality.

[P]lots that historically oozed distorted nationalism and swagger — acted out by virile samurai, robot salarymen, boy superheroes and improbably powerful fairies — have given ground to themes of suicide, depression and criminality. Even the power of kawaii (cuteness) that so dominates popular culture seems to be deserting Japan in its hour of need. Hello Kitty still sells well but the modern audience is after something that combines cuddliness with a degree of nihilism.

Roland Kelts, an expert on Japanese popular culture at the University of Tokyo, said that the large-scale loss of confidence had begun to filter into current manga and cartoons even before the national decline became so evident. Both genres had always had their distinctly dark side in Japan, he said, but there was now a detectable sense of defeatism running through them.

Today, manga is telling us that Japan’s future is desolate, echoing the common sentiment that all is lost. “Aside from the visual winks that have long been a part of the culture, Japanese people generally prefer indirectness to openness, and couch their protest in embedded images,” he said. “Today, as various points of postwar national pride falter, Japan’s relative isolationism serves its graphic artists perfectly. Manga artists now repeat images of fallen glory and gutted gods.”

Can anyone say if this is at all an accurate take on Japanese popular culture? 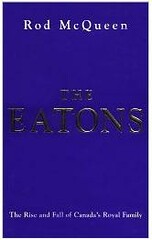 The Eatons, by Rod McQueen
Originally uploaded by rfmcdpei
Canadian business journalist Rod McQueen' 1999 The Eatons: The Rise and Fall of Canada's Royal Family, is an entertaining, well-written, and very well-researched analysis of why Eaton's--for a century Canada's dominant department store chain--faltered and closed in 1999, leaving only placenames like the Toronto Eaton Centre and a
brief historical website occupying a URL that could have been an online shopper's mecca.

Then again, it couldn't have been a mecca, McQueen concludes. After the passing of innovative Northern Irish founder Timothy Eaton and his high-profile and much-liked son John, the subsequent generations of the Eaton family became preoccupied with enjoying their wealth, building cottages and jetting around the world and--by Eaton's last generation--behaving like spoiled playboys. The family's fixation on an enjoyable lifestyle blinded them to the very real changes that Eaton's need to avoid being surpassed by nimbler store chains, with better merchandising policies, worker relations, and store layouts. The inevitable result was decline.

The proud Canadian institution that was Eaton's, McQueen concludes, died long before its final collapse; by that point, it was no longer worthy of the respect that it once commanded. This might be the standard rags-to-riches-to-rags story common to many family-run businesses, but McQueen told it so well I'd recommend it to anyone interested in Canada's business history.
Collapse