Terraforming is, as Wikipedia defines it, the transformation "of a planet, moon, or other body is the hypothetical process of deliberately modifying its atmosphere, temperature, surface topography or ecology to be similar to those of Earth to make it habitable by terran organisms." Once upon a time, science fiction writers and over-enthusiastic astronomers believed that the other Earth-like worlds of our planetary system, Venus and Mars, were entirely Earth-like. Life may well exist in the upper atmosphere of Venus or below the surface of Mars, but these fragile ecologies certainly don't support a complex, robust biosphere suitable for oxygen-breathers like ourselves. Such is not the case. The idea of giving these worlds substantially more Earth-like environments is quite popular in some communities. Any number of people have even produced images of what the finished products would look like.

Mars is the easiest world to terraform, with a day only 40 minutes longer than Earth's and an abundance of volatiles, like water and carbon dioxide, frozen in its soil. The work of increasing the density of the planet's atmosphere and making it breathable, boosting the temperature until Mars can host liquid water, and seeding a complex biosphere would be immense, requiring the construction of a vast space-based support infrastructure, with great mirrors to boost Mars' insolation, the mass important of water and ammonia and methane from any number of asteroids, moons, or Kuiper belt objects, and the development of ecological knowledge to the point that human civilization would be able to build a viable biosphere. Perhaps--only perhaps--if we survive the 21st century we might put the knowledge we'll have so painfully acquired to work here. 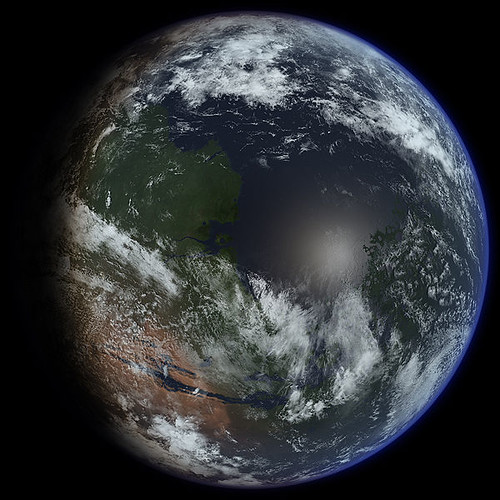 Created by Wikipedia's Ittiz and taken from Wikimedia, this is the artist's conception of a terraformed Mars. This portrayal is approximately centered on the prime meridian and 30° North latitude, and a hypothesized ocean with a sea level at approximately two kilometers below average surface elevation. The ocean submerges what are now Vastitas Borealis, Acidalia Planitia, Chryse Planitia, and Xanthe Terra; the visible landmasses are Tempe Terra at the left, Aonia Terra at the bottom, Terra Meridiani at the lower right, and Arabia Terra at the upper right. Rivers that feed the ocean at the lower right occupy what are now Valles Marineris and Ares Vallis, while the large lake at the lower right occupies what is now Aram Chaos.

Terraforming Venus is altogether different. Although the planet is Earth-like in mass, in other respects it's quite different from Earth, with a super-dense carbon dioxide atmosphere that has boosted the temperature to some 450 degrees Celsius, an orbit too close to the Sun to avoid overheating, and a day that's substantially longer than a year. The infrastructure used to make Mars a habitable globe would be barely what would be necessary to start Venus' transformation. The sorts of mirrors that reflected sunlight onto Mars would need to be built to reflect sunlight away from Mars; the world would have to be cooled sufficiently to bind carbon dioxide with the world's surface or with regolith transported to Mercury; massive amounts of water and other volatiles would need to be transported to Venus. While the mirrors would need to remain indefinitely to avoid a second greenhouse effect, and something done to simulate a normal day, the resulting world would be an ocean world, the generally low-lying topography making Venus' surface 80% ocean-covered. 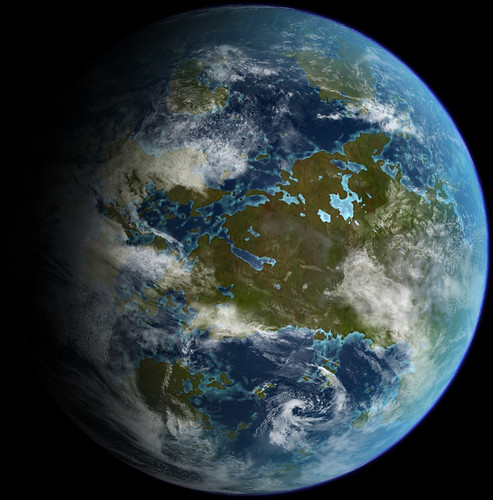 Created by Ittiz and taken from Wikimedia, this is the artist's conception of a terraformed Venus, with equatorial Ishtar and north-polar Aphrodite as continents. "Notice the interesting cloud formations and that the planet has polar caps. I decided to show the planet this way after studying Venus' atmosphere. The two Hadley cells the planet has stop at 70 degrees north and south. So the polar regions are cut off from the warm air. Also the slow rotation of the planet causes the clouds to whip around the planet very fast, especially at the equator, to balance out the temperature difference between day and night sides of the planet."

The idea of terraforming the Moon is so out there that even Wikipedia doesn't have a page. The Dragon's Tales featured the below image of a terraformed Moon, in fact inspired me to make this posting in the first place. As Baird notes, this Moon would be bright; reflecting less than ten percent of the light that strikes it now, a world with oceans and atmosphere like Earth would reflect something like 40%. 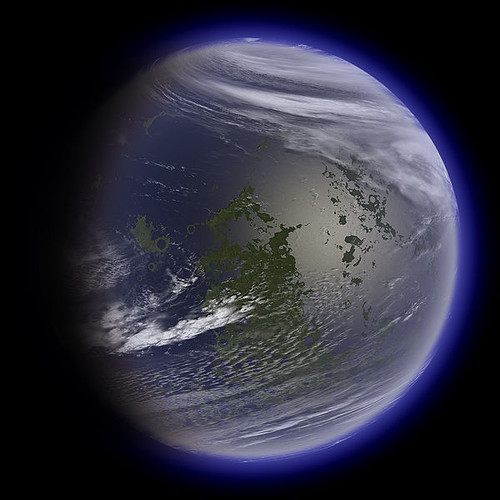 An anonymous commenter at Will's blog outlines what would need to be done. The infrastructure used to terraform Venus would certainly be put to good use!

Terraforming Luna would require a lot of work though. Luna's rotation would have to be sped up to around 12 to 36 hours a lunar day. Adding mass would be a good thing, though even the Moon's gravity at .16 of Earth's is strong enough to keep an atmosphere of 6-7 Bars* without significant loss for around a billion years.

Although the Moon doesn't have much of magnetosphere, the new thickened atmosphere will quickly develop an ionosphere. That will practically halt atmosphere loss on it's own and have the added benefit of protecting Lunans from the Sun and most cosmic rays.

Interestingly enough, having this new atmosphere, coupled with oceans and microbial life, the moon will probably "wake up" geologically within a few million years. That time might see the development of nascent tectonics and a much stronger magnetosphere.

*you need that much to achieve Earth-normal 1 Bar equivalent at lunar sea-level.

Terraforming other worlds in Sol system would be much, much harder, mostly because the most likely worlds involved would be much too small, too cold (Titan), too low-gravity (Ceres) or too hot (Mercury) or located in dense radiation belts (Io, Europa, Ganymede). Quite probably we'll never get around to terraforming any world, even the relatively easy Mars; there's just no economic incentive to radically transform a world. It might make an interesting project for a regime sufficiently interested in demonstrating its technical skills, or maybe an entertaining pastime for a world rich enough to find the costs of terraforming trivial. At least the idea of terraforming's interesting enough, and some of the simulations beautiful.

My previous post on terraforming includes images of newly Earth-like worlds to be produced in the far future. For our civilization to make it to that future, among other things, the global environment has to remain stable without any mass catastrophes. And increasingly, it seems that given continued economic growth and growing consumption, the only way to ensure this will be through geoengineering, the large-scale use of technology and engineering to help ameliorate anthropogenic environmental change. extensive interview at Wired, Eli Kinitsch calls geoengineering "a bad idea whose time has come." Andrew Barton went into detail about this earlier this month.

To put it bluntly, geoengineering is terraforming Earth - that is, humanity taking an active role in the management of the planetary biosphere. At this point I feel it's necessary, part of our maturation as a species; we're at a stage where we're going to affect the environment no matter what we do, so we might as well invest in our future by keeping it as stable as we can. That having been said, though, geoengineering is not perfect. Throwing new variables into an already complex situation can easily produce chaos.</span>

But when the alternative is watching those billions of tons of methane sequestered in Arctic permafrost be vented into the atmosphere, I'll take the chance of chaos. The most likely method of early geoengineering, because it's comparatively cheap, will probably be stratospheric injection of sulfur dioxide to create a cooling effect - the same sulfur dioxide, incidentally, which helps create acid rain.</span>

Environmentalists are quite divided on the subject, some welcoming technological intervention that could help save the Earth, others seeing it as a substitute for the root causes of global environmental issues. Certainly there's going to be side-effects. Some researchers found that seeding the oceans with iron to encourage the growth of carbon dioxide-consuming plankton load the oceans with neurotoxins, while the consequences of using sulfur dioxide to block sunlight can be expected to have side effects, and many of these techniques--which include using giant mirrors in space to reduce the amount of sunlight striking the Earth--almost certainly will have massive problems. It will have to be a global effort, for coherence's sake; the effort might even produce what Anatoly Karlin of Sublime Oblivion calls an "ecotechnic dictatorship", a government committed to spending massive resources on geoengineering regardless of the popular will.

What do you think? Is geoengineering a good idea? Would you combine it with other methods of fighting global environmental change? Do you think that there's any hope for us, for that matter? (I'd like there to be hope, if only because I'd love it if we could put the knowledge we acquired in tending after our Earth to work elsewhere.)