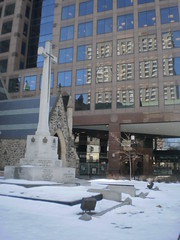 Queen's Own Rifles of Canada Cenotaph, Bloor Street East
Originally uploaded by rfmcdpei
This cenotaph, located in front of the Church of St. Paul's on Bloor Street East in downtown Toronto, is the Cross of Sacrifice erected to honour the dead of the active militia regiment of the same name. St. Paul's is the regiment's church, unsurprisingly.

As Allan Woods noted in the Toronto Star, a recent Canadian government initiative isn't popular with some.

Canada took a kicking as it hosted a five-nation Arctic summit that left three other countries and the Inuit that live at the top of the world out in the cold.

The meeting launched a two-day global gathering in the capital, where G8 foreign ministers will gather Tuesday to talk about sanctions against Iran, nuclear weapons, war in Afghanistan and other pressing international matters in advance of the leader’s summit in June.

But Canadian Foreign Minister Lawrence Cannon appears to have started on the wrong foot while hosting talks where Russia has historically been the bogeyman and presumed Arctic aggressor.

It was a day spent discussing the challenges and duties that Arctic nations face: building northern search-and rescue capabilities; reporting rules for ships hauling people and cargo through the frosty waters; and environmental concerns like overfishing and pollution that weren’t necessary when the Arctic was a frigid no-man’s land.

But when he was standing alone at a microphone at Meech Lake, Cannon was challenged not on global warming, mapping the Arctic seabed and sharing mineral riches, or the massive military buildup in the North. Instead he fended off criticism from both inside and outside the meeting that key groups had been intentionally, and wrongly, left off the guest list.

The most stinging rebuke came from U.S. Secretary of State Hillary Clinton.

“Significant international discussions on Arctic issues should include those who have legitimate interests in the region,” she said.

Presumably that would include Sweden, Finland, Iceland and the Inuit Circumpolar Council, representing the indigenous people of the North. Those four, plus the five countries gathered in Gatineau, make up the long-established Arctic Council, which many fear is being undermined by this new group.

“I hope the Arctic will always showcase our ability to work together, not create new divisions,” Clinton said.

While hollowing out the Arctic Council is a concern, there is a case to be made for Cannon's guest list. Iceland's certainly chilly but it's a Nordic country, while Sweden hasn't had an Arctic coastline since the dissolution of Norway-Sweden more than a century ago, and Finland ceded its lone Arctic port of Petsamo to the Soviet Union after the Second World War. These three countries all have legitimate roles in play in the functioning of an Arctic Council concerned with the far north generally, but issues dealing with the waters of the Arctic itself and the Sea's coastline could defensibly be limited to the short-list of five countries mentioned. As for the Inuit Circumpolar Council, as undeniably useful it is as a voice for indigenous cultural concerns, the ICC doesn't exert territorial sovereignty anywhere: Canada in its northern territories, and Denmark in Greenland (so far), does that.

A question: Do any of my Russophone readers know if any of the Siberian autonomous regions founded in the Soviet era for Siberia's indigenous peoples, like the Sakha Republic, have sought to gain representation at the Arctic Council or other forums?

Thanks to Twitter's Bob_Richards for linking to this 20 minutes-long lecture, made at a TED conference in February 2003 by the famous Freeman Dyson on the possibilities of life in the outer reaches of our planetary system, from Jupiter's moons to the chill comets of the distant Oort cloud.