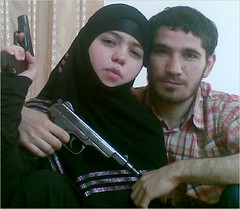 "Bonnie and Clyde '10"
Originally uploaded by rfmcdpei
BAGnewsNOTES' commentary says the obvious about this striking photo.

"If what is evident in this photo of the 17-year-old Russian suicide bomber and her 30-year-old husband, who was killed last December, is how this young Russian women become brainwashed and victimized by the older male militant, the NYT pegs the most obvious reason this picture is buzzing around Europe and Eurasia right now. Borrowing liberally from Hollywood, it's a Russian jihadist version of Bonnie and Clyde."

The New York Times article, Levy and Barry's "Russia Says Suicide Bomber Was Militant’s Widow", suggests that the 17 year old, born to a single mother who worked in a local Dagestan market, met her husband online and fell in love with the idea of jihad.

Like the original Bonnie and Clyde, did these two do what they did because they lived in blocked societies? 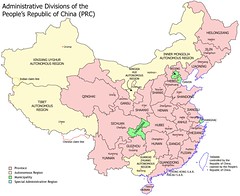 China administrative map
Originally uploaded by rfmcdpei
A while back at geocurrents, Martin Lewis made an interesting point about the invisibility of first-tier state entities, provinces and states and republics and the like, to the wider world. His examples of the Chinese provinces of Jiangsu andZhejiang--located to the north and south, respectively, of Shanghai and the mouth of the Yangtze River--were well-taken indeed.

The standard geographical model of the world [. . .] unduly emphasizes the sovereign state (or “country”). States, of course, are vitally important, but so too are other geographical entities. The fixation on the independent country, compounded by the myth of continents, elevates some parts of the world while slighting others. China and India in particular are short-changed. These two are not merely large Asian countries, as France and Germany are large European countries. China and India are rather subcontinental landmasses comparable to Europe as a whole. In terms of population, they are roughly an order of magnitude larger than most other large countries, dwarfing anything in Europe. As a result, individual Chinese provinces and Indian states are comparable not to provinces of European countries, but rather to those countries in their entirety. Thus the Indian state of Maharashtra is analogous to Germany in terms of its area, population, cultural distinctiveness, and so on. Yet Maharashtra, like other Indian states, is little noticed outside of India, regarded merely as a local area within a rather monolithic country.

The slighting of first-order administrative divisions in the world’s two mega-countries is strikingly evident in the case of the Chinese provinces of Jiangsu and Zhejiang. To say that these provinces are little known in the rest of the world would be a gross understatement. Yet they are China’s two wealthiest provinces (excluding the province-level municipalities of Beijing and Shanghai; see map above). Both are slightly smaller than England in area; Zhejiang’s population (47 million) is a little less than that of England, whereas Jiangsu’s (77 million) is substantially larger. For most of the past several hundred years, northern Zhejiang and southern Jiangsu have formed the economic and, arguably, the intellectual heartland of China; today, together with Shanghai, they form one of the country’s three core areas (the other being Beijing-Tianjin in the north, and Hong Kong-Shenzhen-Guangzhou in the south). The Jiangsu-Zhejiang region is now one of the main engines of the world economy; no matter how one examines it, it is a tremendously important place. Yet outside of China, neither province receives much notice. Instead, they vanish away into an almost undifferentiated China.

Tibet, he goes on to note, is wildly over-represented in Google News stories, while the relatively fewer mentions of Jiangsu and Zhejiang are limited to "narrow business concerns."

When I first read the post I thought of any number of counter-examples. Leaving aside the possibility that my knowledge doesn't count as common knowledge, however, most of the counter-examples are either places like Québec or Catalonia, which might become independent nation-states if their parent states decomposed, or well-defined places like Ukraine and Lithuania which did become independent. The remaining exceptions, places like California and Bavaria, had acquired international recognition through things like hugely influential popular culture industries and centuries of independent statehood. Without these factors, well, how many people have heard of Gelderland or Tver or Manitoba or Minas Gerais?
Collapse