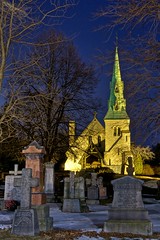 St. James Cemetery, Cabbagetown
Originally uploaded by *Imperialis*
Cabbagetown's St. James' Cemetery, the oldest active cemetery in Canada, is associated with the Anglican Diocese of Toronto and can be quite photogenic. This is the first night photo I've seen of it. 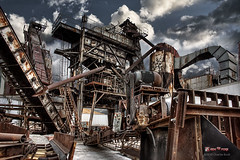 I'd like to thank an anonymous LJ friend for linking to this study from the Proceedings of the National Academy of Sciences in December 2009, "Believers’ estimates of God’s beliefs are more egocentric than estimates of other people’s beliefs" by Epley, Converse et al. I'll quote their abstract below.

And now, their conclusion.

We believe these findings provide important insights into the origins and variability of religious beliefs and have interesting implications for their impact on everyday judgment, decisionmaking, and behavior. First, these data join a growing body of literature demonstrating that religious beliefs are guided by the same basic or natural mechanisms that guide social cognition more generally (4, 10, 25, 26). Religious beliefs need not be explained by any unique psychological mechanisms, but instead are likely to be the natural outcome of existing mechanisms that enable people to reason about other social agents more generally. Insights into the basic mechanisms that guide social cognition are therefore likely to be of considerable value for understanding religious experience and belief.

Finally, these data have interesting implications for the impact of religious thought on judgment and decision-making. People may use religious agents as a moral compass, forming impressions and making decisions based on what they presume God as the ultimate moral authority would believe or want. The central feature of a compass, however, is that it points north no matter what direction a person is facing. This research suggests that, unlike an actual compass, inferences about God’s beliefs may instead point people further in whatever direction they are already facing.

I find this fascinating research, since it pegs not only with my personal experiences and the experiences of my friends but with what I know about the sociology of religion. Religion, even so-called universal religions, are very frequently often intimately associated with ethnicity and nationality, ethnic religions in fact if not in name. It's not just a factor present among ethnoreligious minorities like Jews and the Amish--just think of Roman Catholicism's association with French Canada and Poland, say, or Orthodox Christianity with Russia, or Shinto with Japan, or Shi'ite Islam with Iran, or the religious differences between immigrants and natives in many societies. Many members of these communities stop practising their religions entirely or mostly, instead using it as a marker of group identity. Wide-spread conversions from one faith to another are actually pretty rare, precipitated often by state action (think of the emergence of Anglicanism) or by some systematic failure of the old religion or particular attractiveness of the new religion (the appeal of Islam to lower-caste Hindus in South Asia, say). If a common religion helps define a community of identity, why wouldn't said religion reflect other shared elements of identity, whether political or sociological?

Recent visitors to Kilinochchi, the former capital of the Tamil Tigers, had noticed something unusual — there was a single, new building standing among the bombed-out ruins of the abandoned city in northern Sri Lanka.

It was a whitewashed Buddhist shrine, strewn with flowers. “We thought it strange because there was no one there except soldiers — the civilians had all fled,” one of the visitors said.

Officers told them that the shrine had been damaged by the Tigers and renovated by the army — recruited largely from the Sinhalese Buddhist majority — after the rebels’ defeat a year ago next month. “It’s an ancient site,” Major-General Prasad Samarasinghe, the chief military spokesman, told The Times.

Many Tamil archaeologists, historians and politicians disagree. They say that the area had been populated for centuries by the ethnic Tamil minority, which is mostly Hindu. “There was nothing there at all,” Karthigesu Sivathamby, a retired professor of Tamil history and literature at the University of Jaffna, said.

In any number of ethnic conflicts, one ethnicity's nationalists has tried to undermine the rights of another ethnicity to independence, or even to exist, by claiming that history vindicates their right to dominate a disputed territory. Jewish nationalists claim that the documented history of Jews in Palestine nullifies the rights of Palestinian Arabs to a homeland; Serb nationalists claim that the existence of a medieval Serbian empire in Kosovo means that Kosovar Albanians don't have a right to autonomy; some post-war German nationalists claimed that, despite the mass population displacements following the Second World War and the Cold War, Germany had a right to Silesia and Poland. So it is in Sri Lankan circa 2010.

The true origins of the site may never be known without independent analysis — which is impossible while the army restricts access to the area. Many Tamil community leaders fear that the shrine is part of a plan to “rediscover” Buddhist sites and settle thousands of Sinhalese across the north to undermine the Tamils’ claim to an ethnic homeland.

When the British took control of the country in 1815, they were unsure of its ancient history but soon embraced the legend of the Mahavamsa — a text written by Buddhist monks in about AD500.

It suggests that the Sinhalese are descended from Prince Vijaya, an Aryan prince exiled from northern India in about 500BC, and that Tamils did not migrate from southern India until 200 years later.

That theory — still taught in schools — underpins the Sinhalese chauvinism that ultimately drove the Tigers to launch their armed struggle for an independent homeland in 1983.

In fact, archaeologists had discredited that after independence by excavating settlements in the north that dated from long before 500BC and showed similarities to sites in southern India — suggesting a much earlier migration.

When the conflict began, they were forced to suspend excavations and many Tamil archaeologists fled into exile overseas.

Sinhala nationalism, as the International Crisis Group noted in 2007, has grown, arguably to dominate Sri Lankan public life. This might be the culmination of what Michael Roberts wrote about in his essay, the appropriation of the language of Sri Lanka's past by Sinhalese nationalists. If, as Page suggests, the Sri Lankan state is defining the island's past as Sinhala and the Tamils as--let's hope something like this world will be used--latecomers, it'll be easy enough to define Sri Lanka as basically as a Sinhalese nation-state as opposed to a bicommunal one, with Sri Lankan Tamils treated no as partners but rather as an aggregate of individuals, people who might share a culture somewhat different from the Sri Lankan norm but basically dependent on the good will of the neutrally Sinhalese Sri Lankan state. Why, history proves that this should be the case!

Might the model of the tobacco farmers of southern Ontario, bought out so they could go on and earn themselves a viable living, be relevant to the sealers of Atlantic Canada? Certainly sealing is a physically hard and potentially quite dangerous traditional industry with deteriorating prospects. Polls with larger numbers of polled might settle the question decisively.

A recent poll reveals half of Newfoundland sealers surveyed support a federal buyout of the industry, which would involve fishermen and vessel owners being compensated for their sealing licences, and money being invested in economic alternatives for affected communities.

The poll, conducted by Ipsos Reid on behalf of the Humane Society International/Canada, an animal rights group that opposes the hunt, said half of the 181 sealers it polled by telephone between Dec. 7, 2009 and Jan. 24, 2010 were in favour of a buyout. The poll is considered accurate plus or minus 7.3 percentage points, 19 times out of 20.

But the Canadian Sealers Association does not see that as a reasonable option and disputes the poll's accuracy.

"There's 11,000 licensed sealers in Newfoundland and Labrador and I don't know where they got the sealers," said Frank Pinhorn, executive director of the Canadian Sealers Association in Newfoundland. "I don't think their base for doing this survey is representative in any meaningful percentage."

The humane society said the poll indicates the sealers' desire to take an alternate route instead of receiving government subsidies to keep the industry viable.

"The Canadian government claims they are supporting sealers by promoting and subsidizing the sealing industry," Humane Society executive director Rebecca Aldworth said in a news release. "Yet this poll reveals broad support among sealers for a federal buyout of the sealing industry -- a solution that would allow Canada to gracefully exit a controversy that has haunted us for five decades."