Bloc Quebecois Leader Gilles Duceppe says Newfoundland and Labrador was once its own country and it's up to that province whether it too wants to separate from Canada.

Duceppe was talking sovereignty in St. John's on Wednesday where opposition to the Meech Lake Accord - which would have recognized Quebec as a distinct society - helped kill the deal.

He spoke before a group of students at Memorial University, where one of them asked him whether Newfoundland and Labrador, Alberta and other provinces would separate if Quebec left the country.

"Newfoundland was once a nation, even (had) a national anthem, so it's different from Alberta," Duceppe said. "But it's your decision. I don't want to talk about what you have to decide. It's your own decision."

Newfoundland was once a dominion that functioned much like its own country until 1934, when a British-appointed commission oversaw it.

It became part of Canada on March 31, 1949, after a referendum where only 52 per cent of voters supported joining the country.

After speaking to students, Duceppe told reporters Quebec could continue a fruitful relationship with Newfoundland if his province separated.

"We have more proximity with Newfoundland and Labrador, especially Labrador, than we do have with B.C.," he said.

"We have trade, we have some business disputes at certain times - that's part of life also - but I think that we could work as a sovereign state."

As the CBC noted in 2003 and National Post journalist Don Martin noted in 2009, while full-fledged separatism is rare regionalism is definitely strong. Dominion of Newfoundland, a polity that, while never quite achieving the sovereign status of Canada or Australia, was nonetheless internally self-governing, this only ending in the 1930s when economic collapse led the Newfoundland government to cede sovereignty to the United Kingdom, eventually to join Canada as the tenth province. Long the poorest province of Canada, a famously fisheries-dependent province notable for the emigration of its people, things began to change in the 1980s and 1990s as the cod fisheries have collapsed and the oil industry boomed. Newfoundlanders have increasingly felt themselves aggrieved with Ottawa and increasingly confident of its ability to manage its own affairs. The province's premier, Danny Williams, who has very actively fought the federal government and its perceived intrusions on the provincial government's authority, to the point of actively campaigning against the Conservative minority government in the most recent federal elections. Some of this prosperity has led people to say silly things.

After 60 years of have-not handouts, Newfoundland proudly declared itself master of its domain four months ago and cut its lifetime umbilical cord to federal equalization payments.

But that was supposed to represent the end to financial dependence on Ottawa, not launch a declaration of independence from Canada.

So what to make of Liberal Senator George Baker who, while chatting on a St. John’s radio talk show while strolling through an airport this week, declared The Rock ripe and ready to commit itself to again becoming a sovereign nation.

“People will soon be advocating, you know, that we can’t remain in the Confederation in which we’re discriminated against and not respected for the great contribution that we make,” he fumed. “I believe that day is coming for sure if this keeps up.”

This refers to a capped equalization formula that Premier Danny Williams insists will cost the province $1.5-billion worth of federal cash in the next three years. It was just the latest grievance, with figures disputed by the federal government, to prompt the premier to spend $81,000 campaigning for Anyone But Conservatives in the last federal election, which successfully culminated in the governing party being voted off the island.

Like Alberta, where there’s always idle chatter supporting separation, it’s hard to determine if a Newfoundland divorce from Confederation is an active option or mere advocacy from the fringe.

A hard-done-by streak thrives in Newfoundland’s unique force of personality, a sense they got a lousy deal by entering Confederation on April Fool’s Day, 1949 and should hoist the unofficial Tricolour on every flagpole flying the Maple Leaf now.

The Premier’s office said Danny Williams hadn’t read Mr. Baker’s comments, but the strangely helpful Prime Minister’s Office distributed the Liberal senator’s quotes in audio form and highlighted transcripts while ordering a pair of MPs to launch blusters in his direction just ahead of Question Period on Wednesday.

Like Prairie farmers rediscovering the benefits of a Canadian Wheat Board monopoly in hard times, Newfoundland may soon find Canadian taxpayer support will again be a useful safety-net with the precipitous $100 decline from $140 barrels of oil.

Senator Baker himself predicted last year’s $1.4-billion provincial surplus will turtle into a deficit again, although he conveniently blames it on the federal rip-off and not tumbling oil prices.

Some non-Newfoundlander Canadians, like this commenter at Damian Penny's blog, might be happy enough to see Newfoundlanders go. Such a secession's unlikely to happen, the support of Québec sovereigntists notwithstanding, unless something catastrophic happens. What this catastrophe could be, I've no idea. 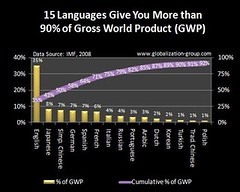 Languages and Gross World Product
Originally uploaded by rfmcdpei
Via

demographer's post, I've come across this interesting graphic showing the extent to which countries dominated by certain languages dominate the gross world product.

I'm surprised to see that the Polish, Turkish, and Dutch languages are associated with as large a share of GWP as they are, at least according to this chart, and that Portuguese. Korean, Arabic and Italian are as unrepresented as they are. Still, it's overall not that surprising--of course English, French, and Spanish are well-represented given their status as global language, likewise German and Japanese with their very large and wealthy domestic economies. 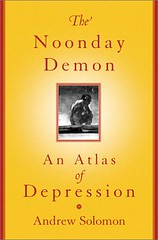 Andrew Solomon, The Noonday Demon
Originally uploaded by rfmcdpei
Andrew Solomon's 2001 book on depression, The Noonday Demon: An Atlas of Depression, is a title that I first came across in the middle of my most severe recent depression in 2008. Solomon has arguably made his name from this book--his official site is dominated by it--and, I think, he certainly deserves this.

The Noonday Demon is a wonderfully comprehensive survey of the issue, beginning with his own personal experiences and continuing through examinations of the various treatments for depression and depression in history and the different populations subject to depression and how they cope. Even at the time, I could see that he'd achieved something spectacular. Solomon's book is wonderfully brave. Without his personal admissions, the book would have been a useful tome. With his accounts of his depression, The Noonday Demon becomes a powerful book, introducing as well as anyone could the experiences and thinking of the depressed to non-depressed readers. It's such a hard thing to communicate to one's well-meaning friends and partners and families, I'm pleased he's been able to do it.

The book's got problems, of course. Bookslut's Jenna Crispin notes that Solomon's privileged background has allowed him to access any number of therapies, from electric shock therapy to drug cocktails to Senegalese shamans, that would have been unavailable to most poor and middle-class Americans. I am infinitely grateful that OHIP--Ontario's public health plan--covers the cost of all these therapies, though sadly not the drugs. I can only imagine personally what people living in less fortunate jurisdictions would gave to deal with--perhaps they'd be offered a bottle of rotgut whiskey and a rope? Crispin's critique of Solomon's bias is unfounded, I think, inasmuch as Solomon does examine at length the plight of the different socially excluded and marginalized groups, from the Inuit of Greenland to LGBT people to the working-class poor. Solomon's gaze is never anything but inclusive.

More profoundly, as Joyce Carol Oates noted in her New York Times review, Solomon makes bizarre claims about depression as a curative phenomenon, as something that people can learn from and use to better themselves. Perhaps, in the limited sense that the talk therapies--group therapy, cognitive behaviour therapy--often used to treat depression can help people who've exited depression. That's the only way it can help. I know myself that most of the coping techniques that people develop, like self-isolation and ignoring problems and self-indulgence, aren't very adaptive when people manage to exit depression. It leaves me perplexed.

But, despite these flaws, Solomon has succeeded wonderfully. He introduced his readers to depression via his own personal experiences, experiences which weren't that far removed from my own; he examined depression's origins; he examined ways different people coped; he examined the hopes for effective treatment. Solomon succeeded in his project of explaining depression, indeed defining it in a way that the world can understand. I'm so glad that he did that.

Although perhaps not as jolting as an alarm clock, a cat’s “soliciting purr” can still pry its owner from sleep. And, when sufficiently annoying, the sound may actually coerce them from bed to fill a food bowl.

This particular meow mix—an embedding of her cat’s high-frequency natural cry within a more pleasant, low-frequency purr—often awakens Karen McComb, a behavioral ecologist at the University of Sussex in the U.K. and lead author of a paper about that sound published today in Current Biology.

“Solicitation purring is probably more acceptable to humans than overt meowing, which is likely to get cats ejected from the bedroom,” McComb said in a statement.

To understand just how cats vocally manipulate owners, including herself, McComb and her team set up a series of experiments. First they recorded the purrs of 10 cats; some were recorded when a cat was actively soliciting food and others in a non-solicitation setting. Fifty people then listened to the sounds at the same volume. Individuals judged pleading purrs as more urgent and less pleasant than normal purrs. When the researchers played the purrs re-synthesized to exclude the hungry cries, leaving all else the same, the volunteers perceived the purrs as far less urgent.

McComb suggests that cats may be cashing in on human's naturally nurturing response to a baby’s cry. Previous studies have shown the cat’s embedded cry shares a similar frequency.

Shakespeare tends to chirp-meow more than purr; actually, he doesn't purr at all. That said, he certainly has me trained. If I don't respond to those endearing sounds, first he walks on me, then he gently nips me or presses his claws softly into my fresh. I've learned to respond it the chirp-meow, so fortunately it doesn't come to that anymore.