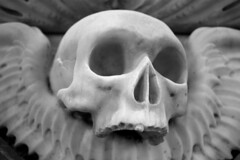 Death in the Afternoon
Originally uploaded by richardr
"The church of St Mary the Virgin has stood on the same site ever since the 11th century, and the manor was held by Edward the Confessor until his death in 1066. After the Norman conquest the Royal manor was held by the King as part of the property of the Crown. In the ancient manuscript known as the Testa de Nevill there is a brief entry recording the gift by Henry I of his estate here, which included the church, to the Abbot and Convent of Reading. The 13th century saw the building of the north aisle, probably by the Knights Templars, who had a preceptory at Shalford, near Brimpton. A quaint carving over the north doorway (which has now been blocked) could represent the badge of the Master of the Order. The outstanding exterior feature of the church is the elaborately carved south Norman doorway inserted between 1150 and 1170. It shows a curious reversion to an earlier type in some of its ornamentation.

A recent news article reminded me of the fact that, although Canada's Francophones are overwhelmingly and increaisngly concentrated in Québec and New Brunswick (and Franco-Ontarians, there's still significant Francophone minorities elsewhere.

Hearing French spoken at the Nova Scotia legislature may be less of a novelty if an Acadian MLA gets his way.

Michel Samson, Liberal MLA for Richmond, wants the legislature to offer simultaneous translation so he and other French-speaking MLAs can debate or ask questions in their mother tongue.

The issue came up Wednesday in a rare French-only exchange during question period.

Samson posed a question in French, asking whether the minister of Acadian affairs supported his idea of having French translated into English during those occasions when he and other Acadians want to use French in the house.

Earlier this week Graham Steele, who is also finance minister, said simultaneous translation would likely be too expensive.

"I know many members of the house won't understand what the honourable member just said, but they can see he's very worked up about it," Steele said Wednesday.

If MLAs want a translation service, he said, he'll look into it on one condition.

"Whatever the cost turns out to be, equivalent cuts must be found elsewhere in the assembly's budget. We are not in a position to be adding new things regardless of what the cost might be," Steele said.

Although the ethnogenesis of the Acadians took place in the west of the modern province of Nova Scotia, the ethnic cleansing of the Acadians by the British at the beginning of the Seven Years War forever disrupted this minority, creating an overwhelming Anglophone majority and a small but concentrated Francophone minority.

Francophones are 15 percent of the population in four of Nova Scotia’s 18 counties. The Acadian population is highly concentrated and Acadians are in the majority in some municipalities. Their impact and presence in the daily life of Nova Scotia’s Acadian areas is much stronger than their percentage of the provincial population would suggest.

There's still ongoing assimilation, however, with the beginnings of an absolute decline in Francophone numbers.

"The results conclude that French is, for the most part, a language of solidarity - and is relegated to private uses in this province," the report's co-author, Kenneth Deveau, told a crowd gathered Monday at the Halifax campus of the Université Sainte-Anne.

"English clearly remains the status language when one considers the degree with which it dominates the public sphere."

The study, funded by Canadian Heritage and Acadian Affairs, found that Nova Scotia's Acadians and francophones are optimistic about their "community's vitality."

But the report, which involved a survey of 600 Acadians and francophones, concludes that such optimism may not be fully warranted.

"In spite of recent progress, the linguistic assimilation rate for francophones of this province is at such a level that the community will not be able to maintain itself indefinitely," the report concludes.

"It's a scary prospect," Deveau added in an interview.

centralasian for the link to this charming video.

I've a post up at Demography Matters that takes a brief look at the immigration histories of the Persian Gulf states, taking a particular look at Dubai's via Noel's posts, and suggesting that proponents of planned or replacement migration should be really careful to try not to screw over the immigrants by treating them as disposable non-people. Go, read.

angleManjy of you have probably heard about Obama's plans for space. I generally agree with commentators like Bad Astronomy's Phil Plait (see the previous link) who welcome the general direction of the plan, while perhaps disagree with the general details. (Me, I'm not sure that much could be learned from the Moon for Mars, given the very different environments of the two worlds.) On a CanCon angle, Canada may not get much from this.

"The president's announcement really doesn't define any role for Canada at all," Kevin Shortt, president of the Canadian Space Society, said Thursday from Toronto, shortly after Obama announced plans to send astronauts to Mars within his lifetime.

"It will have little effect on where Canada's going in in terms of space exploration. We have no long-term space plan. We have no vision. It's partly the fault of the Canadian Space Agency, but there's been little movement from the government on what our role should be. There's no government policy at all in terms of what we should be aiming for in space."


Nine Canadians have participated in 13 NASA manned missions, and Canada's newest astronauts - David Saint-Jacques and Jeremy Hansen - expressed optimism last summer at the Kennedy Space Center that they might one day walk on the moon. They were on hand to watch Julie Payette fly to space for a second time aboard a space shuttle.

But Shortt points out the NASA space missions have largely been payback for Canada's technological contributions, particularly the robotic device known as the Canadarm that's been an integral tool on space shuttles and on the International Space Station.

"The Canadarm is ongoing, but the bill has been paid," he said. "There's no reason now for U.S. to further ferry Canadians into orbit; we have no other major contributions in the works that would ensure further opportunities for Canadian astronauts to fly."

Another Canadian space expert was more optimistic, saying that exploring Mars could mean opportunities for Canada.

"If you have refuelling stations on Mars as part of your architecture, then robotics is going to be a huge part of that, so Canada's role could be amplified greatly," said space author Robert Godwin.

The Canadian Space Agency certainly isn't one of the major space agencies of the world, with a tendency to participate in certain technological niches such as the Canadarm and no independent launch capability. There has been recent speculation that the CSA might build its own indigenous launch system, launching small satellites into orbit from sites on Nova Scotia's Cape Breton Island or the Arctic port of Churchill in northern Manitoba. This would fit into Canada's tradition of being a niche player in space, but it would also be a pretty significant break from Canada's historic position and depends on other space powers--China, say--not filling it.

Bruce Sterling did me the service of linking to the text of one Doron Swade's presentation on the Soviet bloc's indigenous computers.

In the West, Russian programmers command respect and even awe. One reason advanced for the excellence of Soviet software is that the originality of their algorithms and the efficiency of their code was an enforced compensatory response to inferior hardware.

Others advanced more ominous reasons. Developments in science and technology that offered any prospect of practical application were appropriated and controlled by the state, and abstraction into theory was posited as a refuge from centralised control. The more abstract and theoretical the research the less manifest was its practical value and the greater the immunity from unwelcome controls.

The Soviet computer industry did progress to the point of producing some home computers in the 1980s, but as Swade noted later the computer industries of the Soviet bloc--East Germany's Robotron as a case in point--concentrated efforts on pirating Western technology. If this 1977 Time article can be at all trusted, the Soviet decision to prioritize scientific and military uses of computers over commercial ones helped slow down improvements in computer hardware, while Soviet microchip manufacturing was abysmally behind Western techniques. Slava Gerovitch suggests in a 2008 essay that the desire of different branches of the Soviet government to maintain control over their own information, discouraging the sharing of information between departments in a relatively transparent network, prevented the development of a Soviet equivalent to ARPANET. Thus, when the Cold War ended, so too did most of the Soviet informatics legacy.

Swade's speech goes into more detail, while Wikipedia--as one expects--has a remarkably detail listing of Soviet bloc computers and software. The whole subject fascinates me; possibilities that never came about for whatever reason always do.

Canadian author Margaret Atwood is active on Twitter as--naturally--@MargaretAtwood. Some days ago, she wrote an article for the Toronto Star explaining why she's such a big fan and active participant.

The Twittersphere is an odd and uncanny place. It’s something like having fairies at the bottom of your garden. How do you know anyone is who h/she says he is, especially when they put up pictures of themselves that might be their feet, or a cat, or a Mardi Gras mask, or a tin of Spam? Of course, my Followers are a self-selected bunch: maybe other people don’t get the tins of Spam. I do have a number of techno-geeks and bio-geeks, as well as many book fans.

But despite their sometimes strange appearances, I’m well pleased with my Followers: they’re a playful but also a helpful group. If you ask them for advice, it’s immediately forthcoming: thanks to them, I learned how to make a Twitpic photo appear as if by magic, and how to shorten a URL using bit.ly or tiny.url. They’ve sent me many interesting items pertaining to artificially grown pig flesh, unusual slugs, and the like. (They deduce my interests.) Some of them have appeared at tour events bearing small packages of organic shade-grown fair-trade coffee. I’ve even had a special badge made by a Follower, just for me: “The ‘call me a visionary, because I do a pretty convincing science dystopia’ badge.” It looks like this:

They’re sharp: make a typo and they’re on it like a shot, and they tease without mercy. However, if you set them a verbal challenge, a frisson sweeps through them. They did very well with definitions for “dold socks” — one of my typos — and “Thnax,” another one. And they really shone when, during the Olympics, I said that “Own the podium” was too brash to be Canadian, and suggested “A podium might be nice.” Their own variations poured onto a feed tagged #cpodium: “A podium! For me?” “Rent the podium, see if we like it.” “Mind if I squeeze by you to get onto that podium?” I was so proud of them! It was like having 33,000 precocious grandchildren!

They raise funds for charity via things like Twestival (www.twestival.com), they solicit donations for catastrophe victims, they send word of upcoming events, they exchange titles of books they like. Once in a while they’re naughty: I did get word of a fellow who’d made a key safe by hollowing out one of my books. (Big yuks from his pals, one of whom ratted him out to me and even sent a pic.) But after I threatened to put the Purple Cross-eyed Zozzle Curse on him, he assured me that no disrespect was intended. (He was forgiven.)

So what’s it all about, this Twitter? Is it signaling, like telegraphs? Is it Zen poetry? Is it jokes scribbled on the washroom wall? Is it John Hearts Mary carved on a tree? Let’s just say it’s communication, and communication is something human beings like to do.