1979
Originally uploaded by skandinavia
This is a shot of one of the corridors of the Dundas TTC station.

Over at Foreign Policy, Thomas Hegghammer's article makes the point that violent terrorist Muslim movements attack the United States not because of its infamously libertine popular culture, but because the United States does particular things and is associated with particular things--like the Israeli occupation of the Palestinian territories--that have made it, in the minds of these movements' members, legitmiately subject to attack. How do we know? We've got the evidence, based on what these movements condemn and when they started to become active.

In recent weeks, U.S. Gen. David Petraeus and others have made headlines by suggesting that the Israeli-Palestinian conflict increases anti-Americanism in the Muslim world. The Wall Street Journal's Bret Stephens takes issue with this claim, arguing that cultural Westernization -- in the form of Lady Gaga and other imports that scandalize Muslim conservatives -- is a more important cause of anti-Americanism in the Muslim world than the Palestinian conflict. Stephens notes that Islamists resented American culture well before the Palestinian issue became prominent. As key evidence, he cites Muslim Brotherhood ideologue Sayyid Qutb's rants on American culture following the latter's stay in the United States in the late 1940s.

Stephens is absolutely right that Islamism as a general phenomenon is partly a reaction to cultural Westernization and modernization. Islamists are indeed defined by their rejection of secularism, and like religious activists from other faiths, they dislike consumerism and sexual promiscuity. However, Stephens is wrong when he asserts that Westernization is a major driver of anti-American terrorism and that what happens in Palestine does not matter for the fight against al Qaeda.

Islamism and anti-American militancy are not the same thing. There are millions of Islamists out there, but only some engage in violence and only a tiny fraction fight America. The available evidence suggests the latter care more about Palestine than Lady Gaga.

By citing Qutb at length, Stephens proves my point and undermines his own. Qutb was indeed disgusted by aspects of American culture, but he neither waged nor advocated violence against the United States. Qutb's jihad was against the Egyptian regime, not America.

To the extent that Westernization causes militancy, the violence it inspires is nearly always directed at other Muslims, typically against regimes in Arab countries, because these legislate over matters of public morality. Jihadists are idealists, but they are not so utopian as to think they can stop Westernization by attacking America. However, they do think that by installing Islamist local governments, those governments can take measures to limit social liberalization.

Militants who attack the West, such as al Qaeda members, represent a different phenomenon. They argue that the fight against secular Muslim regimes (and by extension Westernization) is less urgent than attacking non-Muslims who kill Muslims and occupy Muslim territory.

Daniel Drezner has his own post on the subject, linking to some useful writers who make the points that shouldn't need to be made. Daniel Larison, say.

America was beset by jihadist attacks since at least 1948. Oh, wait, this never happened? How strange. That might mean that the decadence-as-cause-of-terrorism argument grossly exaggerates the importance of such cultural factors in explaining jihadist violence as a way of distracting us from remediable political grievances. In fact, attacks on Americans and American installations began after we inserted ourselves into the region’s conflicts and began establishing a military presence there. Hegemonists can obsess over the writings of Qutb all they want, but it will not change the reality that anti-American jihadist violence did not occur until the misguided 1982-83 intervention in Lebanon. U.S. and Israeli military operations and policies of occupation provoke much broader, more intense resentment among Muslims than any general dissatisfaction with the decadence of Western culture and its deleterious effects on their own societies. The suicide bomber in Khost was radicalized by the treatment of Gaza, not the performances of Lady Gaga. It might suit a certain type of Westerner to associate fanaticism, political violence and strict moralism, but on the whole this is a misunderstanding and a distraction from the real causes of the problem.

The recent Moscow subway bombings are instructive on this point. The bombings are outrageous atrocities for which there is no excuse or justification, but one would have to be a blind fool to say that Chechen grievances, which outside jihadists have been exploiting for the last decade, are based in morally offensive Russian pop culture. It is acceptable for hegemonists to acknowledge this when Russia is the target of terrorist attacks, but when it comes to acknowledging U.S. and allied policies as important contributing factors we are treated instead to these sweeping cultural arguments and close readings of Sayyid Qutb.

Drezner might have concluded in his own post that the conservatives who are condemning American decadence as the thing that drives terrorism--Larison's "certain types of Westerners"--are trying to export the culture wars into the realm of international affairs. He didn't. Instead, he emphasized a different point.

Let's temporarily accept Stephens' assumption that Muslims in the Middle East are equally exercised about Israel/Palestine and the decadence of U.S. popular culture. If that's true, from a policy perspective, which issue should the United States prioritize?

If you think about this in terms of American national interests, it's not a close call. Pushing Israel/Palestine forward requires leaning a bit harder on an ally that is actually vulnerable to U.S. pressure. Censoring U.S. popular culture would require massive domestic costs. If you were offering the president advice among these policy options, which one would you say yields the greatest gain for the least cost to the United States?

It's curious that at least some of the people who are so outraged about attacks against America want to use these attacks to radically reengineer American culture--although that the reengineering would remake American culture along the lines that they'd prefer is a simple coincidence, I'm sure.

I've a post up at Demography Matters linking to some population-related news items, everything from Sweden's growing population to the volume of emigration from Mali to the continuing baby boom in Québec. Go, read. 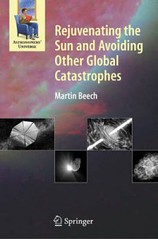 Martin Beech, Rejuvenating the Sun and Avoiding Other Global Catastrophes
Originally uploaded by rfmcdpei
Saskatchewan astronomer Martin Beech's Rejuvenating the Sun and Avoiding Other Global Catastrophes (available in part on Google Books here) is a slim book that more than satisfies my interest in radical futurology, with its talk of remodeling entire planetary systems, what Beech calls "asteroengineering." It reminds me of the far-future space opera Orion's Arm, where humans and their ally species and their created species and guardian artificial intelligences combine to make the galaxy that much more hospitable to intelligent life, whether through terraforming once-sterile environments or transforming solar systems into vast arcologies.

Although Beech is concerned with asteroid impacts, Rejuvenating the Sun is most concerned the aging of the sun. Aging Sol will become a swollen red giant in five billion years, but long before that fate the heating sun will make Earth's present environment unsustainable in several hundred million years. Earth might avoid becoming a Venus-like world for a couple billion years after that. If, Beech suggests, we care for our world, surely we should try to keep it--and its sister worlds, too, Venus and Mars, hopefully rendered Earth-like themselves--a living world for as long as possible.

How is this to be accomplished? A relatively simple method Beech outlines is the gradual shifting of Earth's orbit further out of the solar system, through encounters with well-placed asteroids which pull Earth out as Sol's energy output grows, thus keeping the climate stable. Far more radical means would involve sharply reducing the sun's mass, using barely imagined technologies--solar sail arrays, magnetic field projectors, hypervelocity asteroid bombardments--to vapourize entire layers of our star, directing its mass towards--somewhere. Perhaps it could be used to create some very durable low-mass stars in the Oort cloud.

Rejuvenating the Sun has structural flaws. An extended essay, really, Beech gets to the point of his book only in the last couple of chapters, leaving interested readers like myself bored, and his style of writing could be stilted (the narratives are unappealing). That said, I was an interested reader. I'm interested in astronomy and science; I'm interested in science fiction; I am, for any number of reasons, interested in preserving things, in extending things to new environments. The idea terraformed Solar System really appeals to me, and I couldn't help but agree with others who read about the Epsilon Aurigae dust clouds and wondered if someone had built something there. Beech did a good job in writing about a highly speculative subject of no small interest to me but of little interest to others. How can I do anything but be glad that this book exists and was available to me?

One element of Obama's plans for manned space exploration that I quite like is his hope to explore near-Earth asteroids, landing a team on one in 15 years' time. They aren't as visible as the Moon or as sexy as Mars, but they're still of no small worth.

"By 2025, we expect new spacecraft designed for long journeys to allow us to begin the first-ever crewed missions beyond the moon into deep space," he said. "We'll start by sending astronauts to an asteroid for the first time in history."

On the day the president announced the goal, a NASA task force of scientists, engineers and ex-astronauts was meeting in Boston to work on a plan to protect Earth from a cataclysmic collision with an asteroid or a comet.

NASA has tracked nearly 7,000 near-Earth objects that are bigger than several feet across. Of those, 1,111 are "potentially hazardous asteroids." Objects bigger than two-thirds of a mile are major killers and hit Earth every several hundred thousand years. Scientists believe it was a 6-mile-wide asteroid that wiped out the dinosaurs 65 million years ago.

Landing on an asteroid and giving it a well-timed nudge "would demonstrate once and for all that we're smarter than the dinosaurs and can avoid what they didn't," said White House science adviser John Holdren.

Experts don't have a particular asteroid in mind for the deep-space voyage, but there are a few dozen top candidates, most of which pass within about 5 million miles of Earth. That is 20 times more distant than the moon, which is about 239,000 miles from Earth on average.

Most of the top asteroid candidates are less than a quarter-mile across. The moon is about 2,160 miles in diameter.

Going to an asteroid could provide clues about the solar system's formation, because asteroids are essentially fossils from 4.6 billion years ago, when planets first formed, said Don Yeomans, manager of NASA's Near Earth Object program at the Jet Propulsion Lab.

And an asteroid mission would be a Mars training ground, given the distance and alien locale.