The Scarborough Bluffs, located in eastern Toronto in the former city of Scarborough, are a beautiful high shoreline escarpment.

They run 14 kilometres (8.7 mi) from the foot of Victoria Park Avenue in the west to the mouth of Highland Creek in the east, reaching as high as 65 metres (213 ft), the equivalent of seventeen storeys. However, the escarpment continues westward inland, running between Kingston Road and Queen Street East, pausing over the Don Valley, and continuing on the north side of Davenport Road. The escarpment forms the old shoreline of Lake Iroquois, formed after the last ice age, which left valuable geological records as the part of the escarpment by the lake eroded. The eroded alluvial deposits from the Bluffs then settled westward to form the Toronto Islands.

The bluffs were named after Scarborough, England by Elizabeth Simcoe, the wife of John Graves Simcoe, the first lieutenant governor of Upper Canada. The bluffs along Scarborough's Lake Ontario shores reminded her of the limestone cliffs in Scarborough, England. In her diary, she wrote, "The [eastern] shore is extremely bold, and has the appearance of chalk cliffs, but I believe they are only white sand. They appeared so well that we talked of building a summer residence there and calling it Scarborough."

A park created from fill has been built in the lake below the cliffside named Bluffer's Park; it is accessible from the foot of Brimley Road. Natural beaches extend from east/west past the park and visitors can walk "under" the bluffs. Placing an ear on the bluffs you can actually hear movement within them. Many old cars were plushed off the top of the bluffs in the 40's-80's and the cars can still be found (with a careful eye), almost fully buried.

On one Sunday a couple of years ago, Jerry and I foolishly climbed the bluffs on a lark. At first it seemed easy, but then as we found ourselves on a dirt slopes inclined at a 60 degree angle to the ground we realized we'd overreached ourselves a bit. Not too badly--we completed the climb--and we later made it down to wander on the beach, but still.

James Goneaux, responsible for an [OBSCURA] photo taken at the Bluffs, "Lovers in the Shadows", took two more great images of the bluffs, these of the beach. Enjoy! 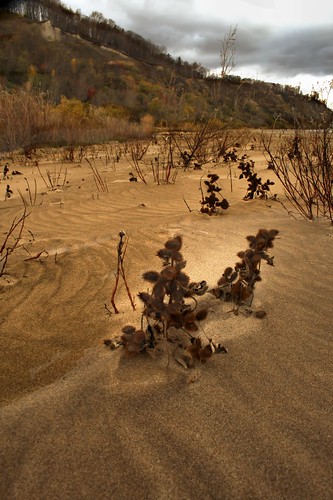 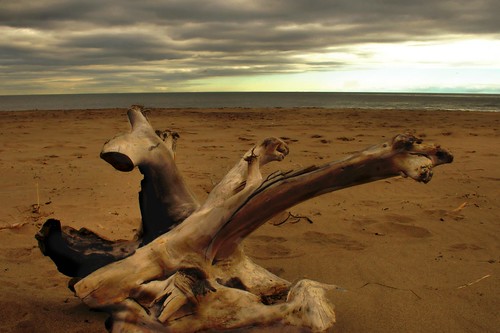 While I've usually found Jeremy Rifkin to be a pedantic bore, what he says about his new book in this interview with eye weekly's Edward Keenan actually makes me interested in him. Or is this just a case of my biases confirming themselves? Regardless.

what’s been driving us all along, Rifkin convincingly argues, is a sense of empathy that science has recently shown is “soft-wired into our neural circuitry.” Competition and aggression are secondary drives, he says, that emerge when our empathic nature is frustrated. The story of our history then, is a millenia-long quest for human connection and community, which has grown while twinned revolutions in energy and communications make the world bigger and reshape human consciousness.

Forager-hunter societies — without exception — developed oral languages that allowed them to organize their communal harnessing of energy (gathered or hunted food). Those languages created a group identity, “a fiction of what constitutes a family,” in Rifkin’s formulation, that extended empathy to a circle suited to the way communication works.

“Oral language is shouting distance,” says Rifkin. “So you can empathize, with your central nervous system, just with those within shouting distance, blood relations, tribal. Everyone in the other valley? Not a human.”

A great shift in consciousness is obvious when you look at the “hydraulic agricultural” civilizations that emerged next. All over the world — in the Indus Valley, China, Mexico, the Middle East — the emergence of written language allowed for the organization of economies that harness energy in agricultural production. These societies, again without exception, developed a theological consciousness, and through it we see an empathic connection to religion.

Jump ahead to the first industrial revolution when the emergence of coal and steam power and the development of the printing press — without which the industrial economy simply would not have been possible — led us to an ideological consciousness, with group identity and empathy enveloping the nation-state.

At the beginning of the 20th century, with the dawn of electricity and oil, came television and radio communications. Suddenly we begin to have a concept of the global village, the multinational family fiction and a psychological consciousness.

Perhaps luckily, we’re at the dawn of another great shift in human consciousness. The internet has created what Rifkin calls “distributed communication” — look at Facebook and Twitter and cellular phones, for example — a worldwide communications network that allows everyone to connect in real time, with minimal or nonexistent government or corporate intervention.

We’re also seeing a “distributed energy” revolution — solar, wind, geothermal — that increasingly allows each household to become energy producers, and to create a surplus of energy and make it available to others. These new forms of energy inspire hope because they don’t increase the destruction of the earth; they can effectively halt the empathy-entropy cycle.

This, Rifkin projects, will give rise to a new era of “distributed capitalism” — a concept that sounds much like the vision of early internet pioneers, where each person joins a global community and can be both producer and consumer of energy on a human, individual scale in a very global context. The technology and the global community it creates provides all the tools needed both to organize and to structure this new world order.

The great shift in consciousness Rifkin expects is toward an empathic view of the world. “If our neuroscientists and cognitive scientists are right — and they clearly are, we’ve seen enough evidence — that we’re actually soft-wired and predisposed for empathy, to be homo-empathicus, not homo avarice, then is it possible to imagine human beings extending that empathy to the whole human race as a family? And our animal relatives, as part of the evolutionary scheme and the biosphere. Because if it’s possible to imagine that then we could actually make it.”

Those who know me will know I think this a tragedy.

Coffee growers in Vietnam may hold as much as 400,000 metric tons of unsold beans, equivalent to about a third of the nation’s latest crop, as the government starts its first stockpiling program to counter falling prices.

Prime Minister Nguyen Tan Dung last week told the central bank to oversee a 200,000 ton program to boost robusta prices that have lost 12 percent over the past year. The beans from the world’s largest robusta producer will be held for six months at most, potentially overlapping with the arrival in the global market of output from Brazil and Indonesia.

“We should have this program undertaken at the peak of the harvest in November, December,” An Giang Coffee’s Khai said from Buon Ma Thuot City in Dak Lak, the country’s main coffee- growing area. Khai spoke by phone late yesterday.

The volume of unsold beans remains high, representing about 30 percent of the most recent harvest, according to Bui Hung Manh, head of the business department at Tay Nguyen Coffee Investment, Import and Export Co.

Today's Earth Day. That's why it's fitting that today, 3 Quarks Daily's Abbas Raza linked to an interview at Seed Magazine, conducted by Lee Billings with Dirk Schulze-Makuch, co-author of a recent book (We Are Not Alone) about life beyond Earth. He thinks that the Viking Mars probes did find life on Mars; the paradigms of the time just didn't pick up on it.

Seed: Your argument seems to hinge, in large part, on the results from the Viking landers. Could you summarize why these results point to life?

DS: In some ways the timing was bad for Viking. A lot of progress was made after its life-detection experiments were already on or on their way to Mars: The discovery of all the ecosystems at undersea hydrothermal vents, and the extremophile research of the early 1980s really changed how we think about life and its limitations. The Viking researchers thought life on Mars would be heterotrophic, feeding off abundant organic compounds distributed everywhere all over the Martian surface. That picture was wrong, and studies of extremophiles on Earth have made us think differently about Mars. Some people say Viking tried to do too much, too early, and as a result of its ambiguous results, nothing has happened with Martian life-detection experiments ever since.

For the Viking results, the devil is in the details. There were three life-detection experiments: the Labeled Release Experiment that yielded a positive result, the Gas Exchange Experiment that gave a negative result, and the Pyrolytic Release Experiment, which was gave ambiguous, inconclusive results. Viking’s Gas Chromatograph Mass Spectrometer (GC-MS), designed to detect organic matter, was made the appeals judge so to speak—and since it did not detect any organic matter, it was concluded at that time that Viking did not detect life.

However, the results of the GC-MS were always somewhat odd. This is because we know from the Martian meteorites that there are organics on Mars. Also, it’s been shown that the same instrument could not detect organics in the Dry Valleys of Antarctica or from hydrothermal soil, places on Earth where we know that a small but significant population of microbes makes a living. So the question is, why did the GC-MS not detect the organics present on Mars? Was the concentration too low? Were they in a form that was not detectable? Or, were they all oxidized to carbon dioxide before they could be measured as organics?

We think the latter because an extra amount of carbon dioxide was exactly what the GC-MS detected. This would be nicely explained by a hypothesis I put forward along with my colleague Joop Houtkooper, which posits that Martian organisms could use a mixture of hydrogen peroxide and water as intracellular fluids rather than water alone. When heated during the GC-MS experiment, the hydrogen peroxide would have become unstable and oxidized all the organic compounds, releasing carbon dioxide.

Such a hydrogen peroxide–water mixture would be a perfect adaptation mechanism for Martian organisms, because it would also convey antifreeze properties—down to – 56°C—and hygroscopicity, which is the ability to attract water molecules directly from the atmosphere, like honey or sugar does. That would be a huge advantage for any life on a very dry desert world such as Mars. And it would also explain the results of the Gas Exchange experiment and the Pyrolytic Release experiment. They were conducted with too much water. If you are adapted to the little water that is present on Mars, too much water will overwhelm you. It’s as if an alien race were to notice that one of us is dying of thirst, and then try to help us by placing us in the middle of the Pacific Ocean. We would drown. In a sense this may be what Viking did to Martian microbes. I think it is particularly telling that one of the Pyrolytic Release experiments conducted under dry conditions showed highly significant organic synthesis rates consistent with microbial life, while another one conducted under wetted conditions showed lower synthesis rates than even the sterilized control did.

Go, read it all. He's confident that life can exist in any number of environments, although how often it actually comes about--without being transplanted from one world to another, notably--is another question.
Collapse