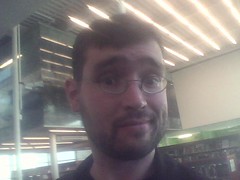 Me with facial hair, again
Originally uploaded by rfmcdpei
I like the Independent.

The Chronicle of Higher Education reports that in a recent study in the Journal of Marketing Communications, clean-shaven fellows were less successful in selling products such as cell phones or toothpaste than the same men with beards. Interestingly, this was not the case for underwear.

According to the Chronicle, which stressed that the study only looked at "neat, medium-length beards," the researchers involved think that their findings could impact not only on advertising but also on other fields where a trustworthy appearance matters, such as politics.

The "presence of a beard on the face of candidates could boost their charisma, reliability, and above all their expertise as perceived by voters, with positive effects on voting intention," they said in their release. 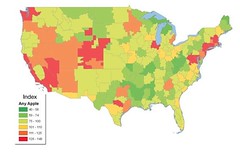 On the spread of the Apple subculture
Originally uploaded by rfmcdpei
I found via Joe. My. God, Experion Simmons' ranking of the top Apple-using markets. Fortune's Philip Elmer-Dewitt reproduces the listing.

I wonder what things are like in Canada. There are fewer number of metropoli in Canada, and the Canadian population is concentrated in these--the top five, Toronto, Montréal, Vancouver, Edmonton-Calgary, and Ottawa. Are Apple users spread evenly across these metropoli? Do imaginative Vancouverites, with their west coast links, using Apple products more than their stolid Albertan counterparts? Or vice versa? I wonder.
Collapse