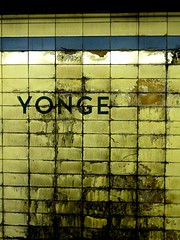 yonge.
Originally uploaded by inedible
Sometimes, part of the subway line can look a bit grungy.

I've a post up at Demography Matters that makes the very important point that naive comparisons between populations in different regions--there, I start from a comparison of the levels of integration of Muslims in the United States and Europe--will inevitably be partial and incomplete, if not fatally flawed, if you don't take note of the fact that different poplations comprise numerous sub-populations with widly divergent characteristics. Go, read.

In his recent announcement on the United States' retooled space program, President Obama announced that the United States would send a manned mission to a near-Earth asteroid by 2025. 80 Beats' Andrew Mosemen pointed out that such a mission would be considerably more difficult than a lunar mission, although scientifically rewarding.

One week ago today, in response to heavy criticism for killing the Constellation program begun under his predecessor, President Obama presented his revised vision for NASA: To build a new heavy lift spacecraft that will go beyond low Earth orbit and land on an asteroid by around 2025. This goal is far more ambitious than going back to the moon. Space experts say such a voyage could take several months longer than a journey to the moon and entail far greater dangers. “It is really the hardest thing we can do,” NASA Administrator Charles Bolden said [AP].

NASA doesn’t know which of the nearby asteroids it might pick for a visit, but the main candidates are around 5 million miles from Earth. The moon, by contrast, is a little less than a quarter-million miles away. The asteroids are about a quarter-mile across; the moon is more than 2,000 miles in diameter. And a trip to an asteroid could take 200 days, as opposed to the Apollo 11 lunar round-trip, which required little more than a week.That means NASA may have to devise new radiation shields and life-support systems for the asteroid-bound astronauts.

Once you get there, it’s no picnic either. You can’t actually land on an asteroid because it has so little gravity. Astronauts would have to somehow tether themselves to the rock to keep from floating away. (DISCOVER blogger Phil Plait cheered this bit of science fact in the 1998 disaster movie Deep Impact, in which the heroes encounter this problem while visiting a comet.)

Despite the challenge, there are several great reasons to go. The chemical composition of asteroids can give scientists clues about era of the planets’ formation, roughly four and a half billion years ago. And on a practical level, an asteroid mission would be a Mars training ground, given the distance and alien locale. “If humans can’t make it to near-Earth objects, they can’t make it to Mars,” said MIT astronautics professor Ed Crawley [AP].

The idea of sending a manned mission to a near-Earth asteroid--one of a population of asteroids orbiting well inside the asteroid belt, closed to the inner terrestrial planets--has been alive for decades, with the relatively large, well-studied, and culturally prominent asteroid 433 Eros frequently named as a possible target. Subject of a recent NASA feasibility study, a 1966 conference paper proposed that NASA use retooled Saturn rockets to send a manned mission to Eros in 1975, when the asteroid would be only 14 million miles away.

Smith's 527-day Eros flyby mission would begin with launch and Earth departure on May 3, 1974, at the opening of a 30-day launch window. Upon arrival in 100-nautical-mile parking orbit, the Eros Flyby Spacecraft Vehicle (EFSV) would comprise a 33.6-ton Eros Command Module/Eros Service Module (ECM/ESM), a 33.2-ton Eros Mission Module (EMM), and a 98.6-ton Apollo Saturn V S-IVB stage, for a total mass of 165.4 tons. The ECM would be based on the conical Apollo Command Module design.

At the time Smith presented his paper, the Apollo Saturn V had yet to fly, but NASA expected that it would be able to launch about 130 tons into 100-nautical-mile parking orbit. Smith cited studies that proposed boosting Saturn V launch capacity to 165 tons by uprating the four J2 engines in its S-II second stage. Alternately, the rocket's S-IC first stage could be fitted with twin 260-inch-diameter solid-propellant strap-on boosters so that it could launch about 215 tons. This, Smith wrote, would provide ample margin for EFSV weight growth during development.

Closest approach to Eros would occur about 14 million miles from Earth on January 28. The piloted spacecraft would spend about 90 seconds within 200 miles of asteroid's sunlit side and about 30 seconds within 100 miles. On January 30, 1975, the crew would end Eros tracking and fire the ESM engines to correct course deviations imparted by the January 23 maneuver, the automated probe launch, and the weak tug of Eros' gravity.

The astronauts would load the ECM with scientific data and check out its systems on October 10, 1975. On October 12, they would abandon the EMM and use the ESM engines to place the ECM on course for Earth atmosphere reentry. They would then jettison the ESM, reenter Earth's atmosphere at about 40,000 feet per second, and descend to the surface on parachutes.

This didn't happen, obviously. Equally obviously, it's a nice idea. If something like this Eros expedition is made with early 21st century technology, I'll be happy.

Science fiction writer Frederik Pohl's novels were overfull with visions of a China populated by crowds of commuters bicycling through the streets on their simple bikes. In Slate, J. David Goodman suggests that the Chinese aren't at all interested in these bikes any more mainly because they're serious, non-ironic consumers.

Fixed gears—brakeless, single-speed bicycles in which the only gear is locked in place on the back hub, so that the rider reduces speed by pedaling forward at a slower rate—have long been a staple of New York messengers. In the last 10 years or so, the urban-cowboy quality of riding without brakes, as well as the bikes' simplicity, has made fixed gears, aka "fixies," an increasingly common hipster accessory and a growing part of global urban style.

Irony also plays a key role, as riders deliberately opt for an expensive, often custom-made ride, with hand-built components, that is less functional than what's available at Wal-Mart. (That is, until March, when even Wal-Mart jumped on the trend.)

It may be this last aspect that's preventing the bikes from catching on in China. Indeed, the anemic fixie scene seems to offer an object lesson in the difficulty of marketing fashion irony here.

"There is a saying in Chinese: 'Laugh at the poor, not the prostitutes,' " Juanjuan Wu, a professor at the University of Minnesota and author of Chinese Fashion From Mao to Now, told me. "Hipster fashion only really works by communicating your irony—in other words, someone needs to 'get it.' Hipster irony in dress would most likely be misinterpreted in Chinese society as simple poverty or weirdness."

Nicole Fall, co-founder and trend director at Five by Fifty, an Asian trend consulting firm, agreed. "Consumers need to be in a position to reject norms or feel confident enough about their status and knowledge to be ironic," she said. "Thus a 20-year-old New York hipster can smoke a pipe or drink a really naff drink because it's funny, but for someone in China, many of their equivalent peers don't have the history and past knowledge of trends to understand what has been cool in the past."

Though there are examples of ironic style on display in China—Mao's face, red stars, military regalia are today worn with something less than earnestness—there is also more at stake in young people's fashion choices, making them "less likely to 'play' with their dress in a cynical or ironic manner," Wu explained. They prefer brands that are recognizably luxury—Louis Vuitton, Prada, Bottega Veneta, etc.—over more ambiguous fashions. 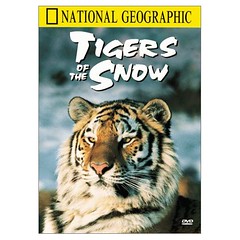 National Geographic, Tigers of the Snow (1997)
Originally uploaded by rfmcdpei
National Geographic's 1997 Tigers of the Snow is a decent documentary exploring the early efforts to save the Siberian tiger. The Siberian tigers are actually the only remnant of a larger population of tigers covering an area stretching from Iran in the west to Siberia, the Siberian Tiger being almost exclusively confined to Russia's Primorsky Krai (around Vladivostok), in turn becoming critically endangered when lumber harvesting destroyed its habitat while hunters killed the tigers so as to render them into Asian traditional medicines.

The documentary's is well-filmed and -narrated, showing the American and Russian researchers trying to learn more about the species, showing the efforts that they were making reserves and public education and captive-breeding sites, showing the Siberian tigers themselves, of course. While the content might be a bit dated, it's certainly a good introduction to the tigers' plight. Although there now seem to be more Siberian tigers in captivity than in the wild, thus ensuring the species' survival in that sense, I wonder how durable it will be. One of the issues raised in the documentary was the fact that tigers raised from cubs in the wild couldn't raise their own cubs, having not picked up those skills from their mothers. How can you successfully enculturate a tiger with these skills?

The telling thing about the documentary was the way in which Tigers of the Snow showed me, and Jerry, that these tigers were cats. Two young adult tigers were playing with each other, pushing each other around with their paws, the way that Shakespeare and Bart do. At the documentary's beginning, we saw the zoologists examine a drugged young male tiger they were tagging, pushing his lip up to show the same sets of teeth I've seen in miniature on Shakespeare, pushing on the bottom of the great padded paws to reveal the same curved claws that I've carefully trimmed on Shakespeare. The difference, apart from the Siberian tiger's lack of a purr, is that of size--Shakespeare is barely the size of one of the young tiger cubs, never mind any of the adults. Despite all these commonalities in anatomy and behaviour, in her CBC Radio documentary Stalking the Cat, Marilyn argued that of the few dozen species in the family Felidae, only Felis catus domesticus was secure, with a population in the hundreds of millions, the other cat species being endangered to one extent or another since they're carnivores with a wide range and frequently come into conflict with humans. The critically endangered Iberian lynx, possibly the first cat species to go extinct in the modern era, has been pushed to the edge of extinction for these reasons.

I wonder if the Siberian Tiger, majestic feline predator though it certainly is, has become too specialized for its own good. How did the domestic cat come to be? Ten thousand years ago, a half-dozen Middle Eastern wildcats took advantage of some early human settlements' pests, the humans observed that these self-domesticating animals weren't of a size that could seriously hurt them and decided to accept them, and a wonderful relation began> Domestic cats have done well out of their partnership with humans, the species being transplanted far beyond their Eurasian homeland to almost every cat-inhabitable territory, growing in numbers vastly beyond any other feline species, even replacing ancestral wildcat populations. Felis catus domesticus is as uniquely successful a generalist within Felidae as the Homindae family's Homo sapiens. In a world where environments change at an extraordinarily rapid pace, the Siberian Tiger may be as dangerously overspecialized in the Siberian forests as the Neanderthal was in the caves of Ice Age western Europe. as doomed as the Neanderthal, and for the same reasons. At least some recognizable catness might survive in its smaller kin; at least some media recording the Siberian tiger's majesty will persist.
Collapse