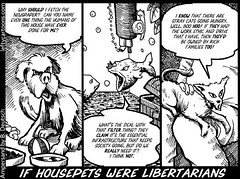 "If housepets were libertarians"
Originally uploaded by rfmcdpei
This comic strip has been circulating the Internet without attributions. Can someone give them to me, please? The person who drew this up deserves credit.

naitsirk points out that the creator's actually B. Deutsch, from his Ampersand strip.

At last. The Toronto Star story comes via Bruce DeMara.

“We’re absolutely excited by it. It’s taken a long time but that’s outside of our control. Our goal is as quickly as possible to get it available in every corner of this country and that’s not the case yet. We’ve got other companies that we’ve got to conclude deals with,” said Al Jazeera English managing director Tony Burman, a former senior executive at CBC News.

Vidéotron, Quebec’s dominant cable provider, is offering the service free for three months as part of its news package, Burman noted, adding he hopes other players in the market will follow suit or offer similar incentives.

Al Jazeera English received regulatory approval from the Canadian Radio-television and Telecommunications Commission in November. The network, which is almost four years old, initially met opposition from Canadian Jewish organizations because of concerns it would broadcast anti-Semitic content, claims that continue to dog the Arabic-language network.

But groups like the Canadian Jewish Congress gave their support for the English-language version to be broadcast in Canada after Al Jazeera executives agreed to set up a consultation process that would allow them to air concerns.

“All of the negative stereotypes that have been attached to Al Jazeera (English), they fade away when people look at the channel and realize it’s a channel that’s been on the air for almost four years and it’s award-winning,” Burman said.

The window Al Jazeera’s 4 p.m. news report opened was unlike anything North American viewers have seen before. The first impression was of immediacy and global inclusiveness, with headlines encompassing the arrest of the Times Square bombing suspect, the spread of the oil spill off the Gulf of Mexico coastline, a teaser for an upcoming one-one-one interview with Iranian president Mahmoud Ahmadinejad, and renewed concerns over airport closures in Ireland and Scotland caused by the erupting volcano in Iceland.

In the next 20 minutes, reports on these topics were filed to Al Jazeera’s English-language studios in London from its own correspondents in New York, Louisiana, Pakistan and Ireland. They were accompanied by graphic, up-to-the-minute news footage and sidebars, including interviews with shrimpers in Louisiana suddenly prevented by government edict from pursuing their livelihood. 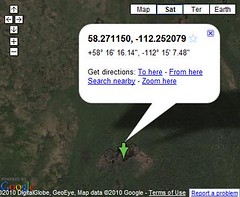 "Giant beaver dam in Alberta visible from space"
Originally uploaded by rfmcdpei
The Canadian Press has the story.

International media are getting into a furry flurry over a beaver dam in remote Alberta that's so massive, it can be seen from space.

Ottawa ecologist Jean Thie located the dam using NASA and Google satellite technology in October 2007, posting it online, but only recently has it grabbed the world's attention.

Thie has told reporters the beavers who laid the foundation for the dam likely got busy building in the mid-1970s.

Alerted to global media's beaver fever, a park spokesman had rangers fly over the area to investigate because the area isn't accessible by any roads or streams.

The dam is now being pegged as the largest known habitat of its kind on earth, beating a 652-metre structure in Three Forks, Montana.

Who said that beaver dams couldn't qualify as megascale engineering?

Lawyers, Guns and Money's Charli Carpenter has written about how she'd like to escape Facebook but can't on the grounds that she'd risk being terribly isolated if she left, and if there was to be a mass exodus to another platform there'd need to be something worthwhile to escape to.

A lot of us can’t just decide to “leave” without having somewhere to go. That’s because Facebook has become not just an extension of our offline networks, but to some extent, a space in which our virtual identities live – our most important semi-imagined community. The decision to leave such sites is usually agonizing and isolating, because we are deeply committed to what Facebook has to offer, even as many of us abhor on principle what Facebook is becoming. [. . .]

In short, Facebook is like a beloved national homeland poisoned by a corrupt and unyielding government. As in real life, a few people like Dan will respond to such a situation by ritual suicide. Others will choose to exercise voice and or soldier on with resigned loyalty to life under the boot. But in real life, a significant number of people choose to defect, to flee. That’s different from just “deleting” yourself. And to do that, you have to have somewhere to go.

Plenty of us would choose such an exile from the dictatorship of Facebook were there a welcoming neighbor nearby to which we could escape with our friends and families. The latter is crucial: since the “space” of social networking sites is constituted both by the platform and by one’s social network, we need a way to convince people in our Facebook networks to join us in exodus. That requires a social networking utility as cool and functional as Facebook, with none of its privacy-violating nonsense. Not just any country, but a country where we and our friends would actually want to go.

Someone I follow on Twitter linked to a social networking project, Diaspora, that is supposed to be a secure social networking system. I rather like the idea of that, and might even sign up for that, but I would likely use it as one social networking network among many, a way to catch up with people who would have joined in an exodus there. I am just too embedded in my existing social networking--Livejournal, Facebook, Twitter, Blogspot and Wordpress I suppose--to be able to tolerate abandoning them altogether. Facebook started off as an indie project, and grew enormously, but that is because it happened to fill a largely unexploited niche, perhaps because of its concentration in a fairly diverse and geographically dispersed crowd of students. I can see limited exoduses, sure, but I think that we are all trapped in a flawed network.

Taking the specific examples of the Jordan and Ganges rivers, Douglas Todd of The Search examines the paradoxes of how some of the holiest rivers in the world are also some of the most polluted rivers of the world, drained of irrigation water and filled with all manner of waste.

What happens to 'Swing Low, Sweet Chariot,' 'Wade in the Water' and many other spirituals that make direct reference to the sacred Jordan? What happens to the Jordan River that the ancient Hebrews crossed into the Promised Land, a symbol of freedom from bondage?

"The sight of pilgrims getting baptized in polluted water, reduced to 10 per cent of its normal flow, is a bit sad & pathetic," says Haddock. Some organizations are trying to do something about it: See www.savethejordan.org

The question of whether governments should protect geographical features considered "sacred" is a fascinating one, particularly in B.C. As Haddock says, some aboriginals have challenged logging and mining on the grounds that the areas are sacred to them. There is no current law in B.C. by which geographical features could be declared sacred, but Haddock said it could be done. "Likely such an area would be protected under the Park Act or other similar designation, which protects it from development but without getting into the 'sacred' issue."