Torontoist broke the news that the famous British street artist, Banksy, is in Toronto. 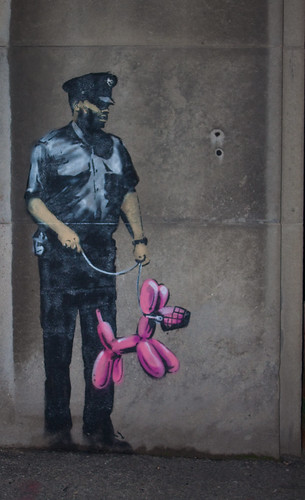 Three new pieces in Banksy's distinctive style have popped up on walls in Toronto over the past two days: one's near Trinity Bellwoods Park, another's near Union Station, and a final one's around the Rogers Centre. (We've been asked to keep the exact locations private, lest "bad intentions" lead to them being chipped away and sold.)

Simon Cole, director of Show & Tell Gallery and something of a graffiti expert, is himself convinced that the three are the real thing—"I have it on really good word," he says, that they are[.] We hear, too, that Banksy is currently in town to coincide with the launch of his film, Exit Through the Gift Shop. Of course, we can't phone the man himself up to confirm that the pieces are legit, but we've got a pretty big hunch that they are.

Banksy was in Toronto for the opening of the film Exit Through the Gift Shop, a documentary in which he appears in disguise.

The reclusive British artist does not want to reveal his identity, because his art is created under cover of night in public spaces.

The Show & Tell Gallery in Toronto reported three images in Banksy's distinctive style that showed up over the weekend.

On Monday, his publicist confirmed via e-mail that the images were his.

Banksy's film, Exit Through the Gift Shop, is not (thanks 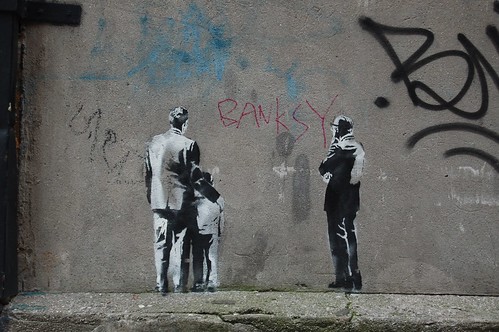 It's no secret that racism has played a substantial role in the reaction of many Americans to the election of President Obama. Can a man like Obama, African-American (at least according to the one-drop rule prevailing in North America), with a Kenyan father and perhaps signfiicantly a white mother (and even more significantly a Muslim father), be a viable candidate for president? Is he--cue ominous an American at all? Perhaps 15% of the total population believes so, making any number of ridiculous claims and contortions of logic to suggest that the multiply-verified Barack Obama birth certificate is a fake, that--as part of a grand plot--he's actually not an American citizen by birth and therefore unqualified for the position of American president. Fortunately, the Hawaiian state government has decided that responding to the birthers isn't worth its energies.

The conspiracy theorists who cling to the false belief that President Obama was born outside the United States outrage many Democrats and embarrass many Republicans. But to a group of state workers who toil away in a long building across from the Capitol, they represent something else: a headache and a waste of time.

The theorists, known as “birthers,” have deluged the state Health Department here with so many demands for information about the president’s birth in Hawaii that Gov. Linda Lingle, a Republican, signed a law this week allowing state agencies to ignore repeated requests from people who have had a request answered in the last year.

It comes none too soon for Health Department workers, who have been inundated with so many requests for the president’s birth records that a printout of the e-mail messages they have received on the topic through March stands some 13 inches high. Each one required a response, and many required consultations with state lawyers.

By Hawaiian law, birth records can only be released to people with “a direct and tangible” interest in them — a person born in the state, say, or certain relatives or their estates. So when questions about Mr. Obama’s birth first surfaced during the 2008 presidential election, his campaign posted a copy of his “certification of live birth” on a Web site; it states that Barack Hussein Obama II was born in Honolulu on Aug. 4, 1961, at 7:24 p.m.

When questions continued to pour in, the state’s health director, Dr. Chiyome Fukino, announced that she had seen the original records and that they showed that Mr. Obama was “born in Hawaii and is a natural born American citizen.”

When the questions persisted, the department created a Web page titled “Frequently Asked Questions About Vital Records of President Barack Hussein Obama II.” It did little to assuage the doubters.

Some of the e-mail messages were vulgar, others hostile. Health department workers found themselves vilified on blogs. “Your name will be synonymous with Benedict Arnold by the time this is done,” reads one that is signed, “an American natural-born citizen.”

Along Ontario's eastern frontier with Québec lives most of Ontario's Franco-Ontarians, French Canadians associated with the Québécois. A recent sign law passed in the bilingual Russell Township two years ago, requiring commercial signage to be in English and in French, is now before the courts.

Ontario Superior Court proceedings will continue until Friday, hearing arguments for and against the controversial bylaw passed in Russell Township in 2008. The municipality, which is about 20 kilometres southeast of Ottawa, includes the communities of Embrun, Russell, Limoges and Marionville.

"I think people are fed up with being pushed by all sorts of minorities and special accommodation for everybody," said Howard Galganov, an English-rights activist who launched his fight against the bylaw in 2008. "We're talking about our right to express ourselves in any language."

Lawyer Ronald Caza is representing the municipality and defending the bylaw.

"Nobody has the absolute right to do whatever they want in anything," he said.

He said the francophone minority is vulnerable to being assimilated, and that's why it's vital to have French included on English signs.

On Wednesday afternoon, residents canvassed by CBC News said they didn't care whether the signs are in French or English or they think the language of the signage should be a matter of individual choice.

It's worth noting that Galganov is something of an extremist in Québec's language wars. It wouldn't be inaccurate at all to say that he's transferring whatever ethnic tensions might exist in Montréal to Ontario, especially since he's been on the record encouraging boycotts of businesses owned by Franco-Ontarians.

The Globe and Mail's Campbell Clark suggests that Britain's experiment in coalition government might restart the idea of a coalition government here in Canada, with the social-democratic New Democratic Party playing probably to the opposition Liberals what the Liberal Democrats play to the Conservatives. Might, mind,

Britain’s new government has demonstrated that coalition governments are possible, even outside of wartime, in the modern era of Westminster-style parliaments. At the very least, it will revive questions for our politicians here: Would Michael Ignatieff, or even Stephen Harper, invite Jack Layton’s NDP into a coalition?

New British Prime Minister David Cameron and Liberal-Democrat deputy Nick Clegg have even devised a new plan to ensure stability in a hung Parliament: a five-year fixed term for elections to be set out in law. But Canada’s lesson is that politicians’ electoral calculations are not easily contained.

Pure politics are the driving force that makes and breaks minority governments. Mr. Harper, like Paul Martin before him, governs until the other parties think they’ll do better in an election. Or until the Prime Minister does. Can a coalition escape those forces?

In six years of minority Parliaments, you would think Canada had seen all the cliffhanger twists. But we haven’t seen this one: two parties actually forming a real coalition, with each holding ministerial posts in cabinet.

One might think the prospect for that in Canada died with Mr. Dion’s attempt. Mr. Harper painted it as unholy, and relishes the idea of campaigning against the coalition bogeyman. The new Liberal Leader, Mr. Ignatieff, killed it. But what made it politically untouchable was two things: it depended on support, in Parliament at least, from the separatist Bloc Québécois, and it would be led by a Liberal Leader who had been beaten into a distant second place.

Another election, and another minority Parliament – our new normal – could leave either Mr. Ignatieff or Mr. Harper in a mathematical position to form a coalition with the NDP, and a British example to point to. Canadians will certainly expect their political leaders to say if they would, too. It’s no longer quite as hypothetical.