The ongoing anti-Uzbek pogroms in Kyrgyzstan, originally located in the country's second city Osh in the southwest but spread to its hinterland, is a straightforward case of ethnic cleansing with origins that seem to be pretty much what this anonymous Guardian<'s editorialist noted.

Uzbeks, who constitute about one-third of the population in southern Kyrgyzstan, are being burned out of their homes by mobs of Kyrgyz armed with automatic rifles, iron bars and machetes, while the local police stand by and do nothing. Not only Uzbeks, but ethnic Russians and Tartars also find themselves in the eye of the storm.

The provisional government of Roza Otunbayeva has lost control and is only now starting to mobilise its armed forces to stop the civil violence. More than 100 people have been killed in the last five days, but the final death toll will be probably much higher. Ethnic Uzbek enclaves are burning, and more than 70,000 people have fled for their lives across the Uzbek border. What is missing is any coherent international reaction.

Those who persist in seeing Moscow's hidden hand behind every outbreak of unrest in the former Soviet space are being disabused of their illusions. The Kyrgyz mobs burning Uzbek homes are, for one thing, on the wrong side. If anything, they are supporters of the former so-called pro-democracy leader Kurmanbek Bakiyev, the man whom Moscow was accused of helping to oust. If the mob violence is anything, it serves as a prime excuse for Russian intervention, as clear a reason as the Georgian attack on South Ossetia was. Soviet troops were sent by Mikhail Gorbachev to quell ethnic unrest in Osh in 1990, so there is even a precedent. But Russia refused to intervene, despite an appeal by the provisional president of Kyrgyzstan. Nor was there any evidence that Russia played anything other than a secondary role in Bakiyev's ousting, as the International Crisis Group reported.

Bakiyev, whose rule descended into autocracy, repression and nepotism, denies fomenting the anti-Uzbek riots. But he and his family have a dark history in the south of his country, which is harder to shrug off. Undoing his predecessor's policies of fostering community relations, Bakiyev relied on his brother, the security chief, to suppress minorities. The departure of the Bakiyev clan triggered a competition for resources in the south. The Uzbeks, who ran the local markets, were accused of a political power grab, and a weak government in Bishkek – a coalition of opposition forces – could do little to prevent the resulting explosion.

Absolute numbers might be relatively small as these things go--only a bit more than a hundred confirmed dead and hundreds more suspected, "only" tens of thousands of refugees confirmed as having crossed the border--but it's still quite early and already percentages are quite high: if a hundred thousand Uzbeks did flee Kyrgyzstan within the past week, that's the equivalent of two percent of the country's population. (Uzbeks form 15% of Kyrgyzstan's population, and almost half of the population of Osh and its province.)

Osh has seen Kyrgyz-Uzbek violence before, in the 1990 riots for instance, and one commenter at the blog Registan stated from his personal observations that there was quite a lot of interethnic hatred, complete with vicious stereotypes of the other ethnic group and any number of people looking to stock up on weapons before something happened. The fighting spread from Osh's downtown into the residential districts of the city; it's fierce. It doesn't help that the military and police forces sent to stop the rioters might be ignoring or actively helping the pogromists.

Who knows what the consequences of this will be? The idea of a Russian intervention echoing the 1990 Soviet intervention has been put foward by Bakiyev in his Belarus exile and by the Kyrgyzstani provisional government, and though publicly rejected but who knows what is going on behind the scenes. The United States and the West is involved since the country's Manas air base supports NATO operations in Afghanistan. What this will do to the internal development of Kyrgyzstan, or to the relationship between Kyrgyzstan and Uzbekistan, can only be imagined to be negative.

What's the proximate cause? It seems to be the sorts of frustratingly vague rumours--someone hurt someone, some people killed other people, details to be later verified--that commonly lie at the origins of any communal riot.

What are the ultimate causes? One essayist argued that the 1990 Osh riots were triggered by competition over scarce resources--land and public utilities like education were cited--and elements of that are certainly present in post-Communist Kyrgyzstan. The country is very poor, and the previous tensions between the Kyrgyz and the relatively more urbanized Uzbeks certainly haven't been helped by the global financial crisis that deprived the country of the remittances sent by many of the hundreds of thousands of migrant labourers from Kyrgyzstan living in Russia and Kyrgyzstan. Despite this poverty, there are suggestions that Kyrgyzstan's wealth relative to Uzbekistan has created a certain amount of net immigration, with Uzbek migrant labourers successfully competing in the labour markets of southwestern Kyrgyzstan via almost obscenely low wages. Combine these socioeconomic issues with the perception--by enough people in both communities--of profound communal differences connected to primordial ethnicity, and with the ongoing political tumult in Kyrgyzstan with revolution after revolution, and there you go.

Why have these rumours and these prejudices led to this violence? As Christian Breuer wrote at Registan, none of these things would have happened if the people responsible in Osh didn't want it to happen. And these people are ordinary people, people who were willing for whatever reason to go and do horrible things one day and then go back home and be the good people their loved ones have known them to be the next.

There is an oft-repeated tendency to blame criminal groups for carrying out the violent attacks and to blame politicians and/or deposed leaders for the manipulation of these groups. Basically, blaming criminal groups and power figures absolves the teenagers and young men from the neighborhood. Certainly they would not rape, steal, mutilate and kill? Must be criminals, right? Wrong. Regular people kill. Criminals kill. And they can be killing at the same time. People have been murdered by their neighbors all over the world at various times throughout history.

At times the violence results from local and/or national power figures mobilizing and transporting their supporters to certain locations, and sometimes conflict breaks out at unpredictable times during normal, everyday interactions. Sometimes criminals are involved, sometimes not. But usually, regular people do horrific things to other regular people. Sometimes, academics and journalists want to believe the best about the people without power, and will attempt to shift the blame to criminals and politicians, thereby absolving the little guy who uses the situation as an occasion to loot, rape and kill (sometimes even denying steadfastly that, just possibly, in this one case ethnicity may be the overriding consideration). And usually, politicians will blame anybody but themselves and will continue to avoid addressing the structure of the political/social environment that allows for such violence to erupt so quickly and with such ferocity. 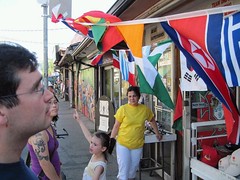 Me vs North Korea, taken by Andrew Barton
Originally uploaded by rfmcdpei
Back on the 30th of May, when Andrew and I made our walk east along College Street from its western to its eastern ends, we stopped off at Kensington Market in time for the engibhourhood's first Pedestrian Sunday of the year. As a neighbourhood with heavy Portuguese and Latin American presences, soccer is naturally big there; as a neighbourhood in a city with connections of one kind or another to all of the participant countries, there's naturallty a market in the national flags of the World Cup participant teams. All of the World Cup participant teams.

Andrew snapped a picture of me looking at the North Korean flag, the red, white and blue flag visible in the upper right corner with the red star on a white circle. I wasn't feeling surprised--I've known that North Korea is taking part for a while, I've seen its flag gathered with the others. I was feeling, mainly, sympathy for the players who certainly are going to have to do as well as they can if they are to escape unfortunate fates.

After the Choenan sinking, Toronto's Korean-Canadian community seems to be disinterested if not hostile to North Korea's World Cup hopes.

Likewise for a popular senior’s centre on Grace St. on the edge of Korea Town. When Hak Huwan Koh, president of the Korean Senior Citizens Society of Toronto, was asked whether he plans to screen the North Korean games, he turned to his colleagues and held a prolonged discussion in Korean before answering that he will not.

“As South Koreans, currently, we are not really in the mood to cheer for the North Koreans,” he said through an interpreter.

These sentiments were echoed by Min Gu Kim, a camera operator/editor with Arirang Korea TV, who said South Koreans would not feel comfortable celebrating a North Korean win.

“There’s tension between North Korea and South Korea,” he said. “And if we celebrate North Korea, then people will think, ‘He’s a spy from North Korea.’ ”

Do you know what the sad thing is? As Andrew pointed out, North Korea's flag is actually pretty attractive, with a colour scheme and layout that reminds me favourable of the flag of Thailand. Would that North Korea called forth similarly pleasant associations.

Muhammad Parvez, 60, and son Waqas, 29, pleaded guilty to second-degree murder in the 16-year-old Mississauga high school student’s death on the morning of Dec. 10, 2007.

But whose bare hands were around the Grade 11 student's neck remains unknown.

In pleading guilty, neither the father nor the son took sole blame for the murder, admitting only that they both were responsible for causing the neck compressions that led to her death.

Aqsa's blood was on Muhammad's hands when he was arrested after he called 911 and confessed to using his hands to murder his youngest daughter, according to the agreed statement filed as an exhibit in a Brampton courtroom.

What shocked me was what her mother told police.

In a chilling police interview on the day of Aqsa's murder, her distraught mother, crying and talking out loud to herself, was recorded as saying she thought her husband was only going to “break legs and arms,” but instead “killed her.”

“Oh God, Oh God. . . Oh my Aqsa, you should have listened,” Anwar Jan said out loud in a police interview room. “Everyone tried to make you understand. Everyone begged you, but you did not listen. . .”

She earlier told police in her interview that she advised her husband to let their daughter go, not to kill her.

She said her husband never said he would kill her.

She told the officer that in her Pakistani culture, if a daughter doesn't listen to her parents, she is punished. “Either they kill the girl or turn her out of the house,” she said.

She thought that her husband would only maim her daughter? Am I reading in too much, but did she think it was her daughter's fault for provoking her menfolk?

You know how there are some people you just want to feel guilty and depressed and conflicted for the rest of their days?