This Ain't the Rosedale Library, once of Church and Wellesley and now of Kensington Market, is my favourite independent bookstore. It is now at risk of being closed down.

Book lovers in Toronto are alarmed by the bailiff’s notice posted on the door of iconic Toronto bookseller This Ain’t the Rosedale Library Friday.

The landlord has hired an enforcement agency to collect the money or seize the property.

The bookstore was closed Saturday, and the seizure of the premises has alarmed Toronto’s literary community.

Following the bookstore’s 30th anniversary in 2009, the Star described This Ain’t the Rosedale Library as “one of Toronto’s most cherished booksellers.”

Although owners Charlie Huisken and his son Jesse were not available for comment Saturday, the bookstore’s struggles came as no surprise.

“These are tough times, the senior Huisken said last year, “but the spirit is still here.”

In an effort to keep its doors open This Ain’t the Rosedale Library moved from a larger and more expensive location on Church St. to its current 86 Nassau St. location in 2008.

Just last year the bookstore and its owners were feted at Harbourfront to celebrate the fact that they were managing to keep the small struggling operation going.

This Ain't the Rosedale Library is facing the travails shared by small book stores generally, within and without Toronto. It's a race, really, a need to escape from the big-box book stores and the online booksellers that are cutting into profit margins and a need for a surviving independent bookstore to stop being a mere bookseller and to become more, the nucleus of a community. Other niche Toronto bookstores

Glad Day Bookshop, North America's oldest gay and lesbian bookstore and the only one of its kind left in Toronto, could be forced to close its doors at the end of summer, said owner John Scythes. It has been in business for 40 years.

Mr. Scythes said he cannot compete against Amazon, which uses its buying clout with publishers and buys books at deep discounts and then sells them at 30 per cent off the suggested retail price. As a result, he said, there is a two-tiered pricing system in the book retailing sector.

“That’s what’s killing people like Charlie,” he said, referring to the owner of This Ain’t the Rosedale Library.

Mr. Huisken founded This Ain’t The Rosedale Library in 1979 and later brought his son, Jesse, into the business. In 2005, the store made it on to the list of the Guardian newspaper’s top 10 bookshops in the world. A Guardian writer described it as “Canada's best independent bookstore, full of small-press publications” and “a model of how an independent can survive.”

Toronto Women's Bookstore, Canada’s largest feminist bookstore, was on the verge of closing until an employee, Victoria Moreno, hatched a rescue plan. She is in the process of buying the 35-year-old store and plans to add a café as well as high-speed Internet access for customers.

“I want to create a social setting as well as a bookstore,” Ms. Moreno said.

As noted by various commenters at

dewline's post on the subject, independent booksellers that survive already command a certain amount of loyalty from their dedicated clienteles.

Is it possible for bookstores to make the transition? I've no reason not to think it's possible. Certainly it's probably the only thing that could save them.

Would it be possible for This Ain't the Rosedale Library to make it? As noted pretty much everywhere, the bookstore already has a pretty fanatical customer base; I don't know how much more it can take things. Certainly its efforts to save on money by shifting to a less expensive region, away from the Church and Wellesley district to cheaper Kensington Market, may have accelerated its downward spiral; I visit the bookstore much less frequently now that it's so much less easily accessible. (It was a couple minutes' walk from Wellesley station. It's now maybe ten minutes' walk south of Bloor.)

there are two clear camps. The enthusiast camp, epitomized by this Daniel Gross essay, suggests that it's just so hard to be a soccer fan in the United States:

Being a soccer fan at World Cup time in America is a little like being Jewish in December in a small town in the Midwest. You sense that something big is going on around you, but you're not really a part of it. And the thing you're celebrating and enjoying is either ignored or misunderstood by your friends, peers, and neighbors. It can be a lonely time.

Jonathan Chait's rejoinder to Gross' essay best epitomizes the rejectionist school of thought. Part of it is a genuine disdain for soccer, a game with lots of flopping and 0-0 ties and is ripe for Simpsons parodies. I suspect that another component is hostility to the trendiness of the game among DC media elites and intellectuals. My local sports radiop station has had a contest to name these people, and come up with "nilrods."

My hunch, however, is that neither of these descriptions fit the American attitude towards World Cup soccer. I've seen elevated but not overwhelming interest in the World Cup. Any honest assessment of soccer would have to acknowledge that the game can be boring for long stretches, punctuated by some moments of genuine excitement and athleticism -- not unlike baseball.

The fact is, there are plenty of sports in the United States that occasionally capture the intermittent attention of the casual sports fan, but won't "break through" the sports zeitgeist until and unless the United States fields a successful national team. This is how it tends to work with the Olympic team sports, and it's how it will work with the World Cup. If the United States can advance far in this tournament, Americans will become more interested; if not, they'll switch back to baseball and the NFL draft.

Unlike the US, we don't have a team in the World Cup, haven't qualified since 1986, in fact. Will this change? I hope so.

The National Post's Tasha Kheiredden suggests that the G20 conference in Toronto may have an upside by reminding potentially sovereigntist-minded Québécois that Québec benefits from remaining within Canada by--among other things--belonging to a nation-state of no small heft and a higher profile than an independent Québec would likely have.

Never mind the G8, but it’s hard to see how an independent Quebec would become a member of the G20. Both in terms of population and total GDP, it would rank below any current member nation. The country with the smallest population in the club is Australia, at 22 million people. The country with the lowest GDP is South Africa, projected by the IMF to be $USD 329 billion in 2010. Meanwhile, Quebec has a population of just under 8 million and a projected GDP of $USD 293 billion, at current exchange rates.

And those numbers would probably both drop, in the short term at least, due to the economic and demographic repercussions of political uncertainty following an independence vote. An outmigration similar to that experienced in the late 1970’s, when 100,000 Anglophones left the province between 1976 and 1980, would seriously damage the economy. While more English-speakers may stay this time around, diminished job prospects would affect all Quebecers, including Francophones, making a one-way trip down the 401 that much more attractive. How would the Quebec government convince them not to go? Hmm – maybe that Berlin Wall analogy isn’t so far off after all, only in reverse.

Knowing this, and with the world literally on Canada’s doorstep, why beat the separatist drum now? Simple – the PQ senses weakness in the Liberal camp. Premier Jean Charest’s polling numbers have plummeted in the wake of accusations of spending irregularities, allegations of judge-buying, and a budget chock-full of user fees. The latest poll puts the PQ in first place, with 41 per cent of the overall vote and 49 per cent of the Francophone vote. That’s enough to form a majority government, due to the concentration of federalist voters in Montreal ridings; even on the island, the PQ outpolls the Liberals 40 to 36 per cent.

None of this is good news for the embattled Premier, or for Quebecers and Canadians who wish they could enjoy their summer in peace, without a referendum storm cloud blackening the horizon. It’s also the last thing Prime Minister Stephen Harper needs to hear as he welcomes the G20 to Toronto. But maybe the Summit will work in federalists’ favour; fake lakes aside, Canada has a chance to shine on the world stage, and show Quebecers – and all Canadians – the benefits of remaining part of our federation. Membership has its privileges, and they shouldn’t be taken for granted.

The question of whether or not Québec's likely to secede even if its electorate did vote a PQ majority government is something else entirely. Leaving aside the relatively slim likelihood of an outright vote for independence, inasmuch as the various (now strictly Clarity Act-supervised and -limited) sovereignty-association proposals would arguably only reorder the structure of the Canadian federation, what with hopes for a shared currency and customs union and common political institutions, I suspect that Québec's electorate isn't much bothered by the issue of living in a country belonging to the G20 either way. 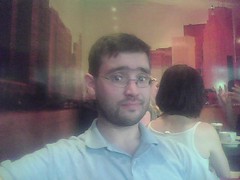 rfmcdpei at the Bloor/Bathurst Aroma, 20 June 2010, 7 pm
Originally uploaded by rfmcdpei
Laptops with working webcams can be quite useful indeed.
Collapse