I thought of Donna Summers' 1979 "Bad Girls" a couple of Saturdays ago, when, walking west to the College subway station at about midnight, I ended up walking past some female sex workers standing on the southeastern corner of Church and Carlton.

Church and Carlton is located just to the south of Church and Wellesley, east of Yonge Street, and shares in the poverty and relative deprivation common to much of downtown Toronto east of Yonge Street. The intersection isn't far at all, actually, from Dundas and Sherbourne, the intersection that anchors the pleasantly-named neighbourhoods of Garden District and Moss Park and that is well-known as Toronto's most violent neighbourhood, "ground-zero in Toronto's drug scene" and (perhaps not coincidentally) a major centre of Toronto's street prostitution. Even though it isn't any more than ten or fifteen minutes' walk from the glittering towers of the downtown where the G20 will be meeting, with presuambly inexpensive land prices and an excellent location, the neighbourhood hasn't been partially gentrified on the model of Cabbagetown. Stay away, the apartment listings explicitly warn.

"Bad Girls" is a humane song, one fitting squarely into the idealized disco tradition of reaching out to the marginalized, recognizing their humanity, and making something lucratively danceable about it all. The women who walk the streets in her song--not only women, not in reality and probably not on that particualr streetcorner at that particular time--are people, less lucky than most but people worthy of respect nonetheless.

See them out on the street at night, walkin'
picking up on all kinds of strangers
if the price is right you can score
if you're pocket's nice
but you want a good time
you ask yourself, who they are?
like everybody else, they come from near and far

Now you and me, we are both the same
but you call yourself by different names
now you mama won't like it when she finds out
her girl is out at night

(And for the record, when I accidentally sent my mother and sister to stay in a bed and breakfast at Dundas and Sherbourne back in 2005--hey, it was very close to the downtown and the prices were great!--they didn't like the neighbourhood but didn't feel threatened by the sex workers that they passed on the street to and fro. Neither did I.)

My [MUSIC] posts tend to be about how I relate music to myself, how it illuminates area of my own life, even influencing my development over time. What got me to write this [MUSIC] post is how, in that free-associating moment, I realized that I might connect music closely to my own life, I might connect it to trends in the culture at large, but I do not connect it nearly enough to others' lives. It is a failing of empathy on my part, likely the product of the way I acquired my own tastes in music: quietly, without much attention for what else was going on or what other people liked, laden with so much personal meaning that it never quite got through that music could have the same strong meanings for others that it did for me, representing their life or communicating hopes or something similarly auto/biographical. "I have issues--he has issues--we have issues together."

Jonas the Tiger
Originally uploaded by rfmcdpei
Jonas' safe return makes another reason, after my relatives, for me to visit Toronto's easternmost GO Train-accessible community of Bowmanville. Good kitty, good kitty. (This picture was taken by the Sûreté du Québec and is available at this CBC article.)

Jonas the tiger made his first public appearance at the Bowmanville Zoo after his dramatic ordeal, when the trailer he and two camels were housed in was stolen.

The animals were on their way home from performing in the Cirque Estival in New Brunswick when they disappeared. The driver stopped at a motel an hour east of Montreal and checked on the animals several times overnight, but early in the morning of June 18, the vehicle and trailer were gone.

"It was a crime of opportunity. They saw a nice truck and trailer and scooped it. And low and behold, they opened it up and got more than they bargained for," said Mr. Hackenberger. "Our windows are very high, so you can't peer in. You'd think it was a big horse trailer. Maybe they were trying to steal horses. Scrap prices on aluminum are so high it's worthwhile to steal just the trailer."

After a frantic weekend search, Quebec police located the animals uninjured in rural Quebec on Monday night. It looks as though the animals were never removed from their trailer. A reward of $20,000 was offered by the zoo for the return of the animals over the weekend, and police received a telephone tip Monday.

Everyone was afraid that Jonas could be killed thanks to the failing of the delicate feline metabolism I've come to understand via Shakespeare. Fortunately, all was well.

Large cats eat so much protein that without water, the protein can turn to nitrogen and permanently damage the kidneys, explained Mr. Hackenberger.

"The biggest fear was the fear his kidneys were compromised and he would have died," said Mr. Hackenberger.

The tiger was fed through the mesh of his cage. The thieves fed Jonas several cans of Friskies cat food, plus some meat from the butcher shop, said Mr. Hackenberger.

"It's not a diet that could have kept him going long term," said Mr. Hackenberger.

For a few days, I wondered if the thieves might have been so surprised by their unexpected haul that--to put it one way--Jonas might have been fed more than adequately. No one's dead, thank God.

Fellow felinophile Razib Khan at GNXP has recently made a post, provocatively titled "Animal Apartheid", that is not at all impressed by the interest of some conservationists in keeping some species genetically pristine. Razib's article stemmed from a Globe and Mail piece on the hydridization of animals in Canada, with wild animal populations interbreeding either with other species--either imported directly by human beings, or introduced to the other's habitat as a result of human environmental changes. Remember the famous grizzlar, the ursine creature of mixed polar and grizzly bear descent shot by a hunter in the Canadian Arctic? He was product of this sort of thing.

Habitat destruction could also be pushing cross-breeding among spotted owls. Extensive logging cut down 80 per cent of the old-growth forest they live in and allowed for the invasion of barred owls. This has resulted in cases of hybridization between the two species - and today the David Suzuki Foundation calls the spotted owl the most endangered bird in Canada.

Climate change is another factor in the rise of interspecies mating. Because of changing temperatures, the blue-winged warbler has been moving north - both competing and mating with its closely related golden-winged cousins.

This also could explain the "grizzlar." Wildlife geneticist David Paetkau, whose company tested the hybrid's DNA, thinks that warming temperatures may have caused the grizzly father to spend less time hibernating, giving him more time to wander farther afield. And once he found himself so far out of his usual range, he may have chosen to mate with a polar bear because he could find no females of his own kind.

In fact, grizzlies and polar bears separated into two distinct species less than one million years ago. In evolutionary terms, this is a blink of an eye, and the bears' genes are so similar that Mr. Paetkau suspects that the offspring, like other hybrid species, was probably fertile.

Me, I thought of cats, particularly of the Scottish wildcat.

The beautiful domestic cat descends from a few animals of a Middle Eastern subpopulation--Felis silvestris lybica--of Felis silvestis. Just a few wildcats chose to strike up a partnership with emergent agricultural human society, in so doing scoring a huge success, their descendants spreading worldwide and growing to number in the hundreds of millions. The domestic cat is the only feline species that is quite safe from extinction. Unfortunately, the relatives of the housecat that did not strike up a partnership with human beings, like the Scottish wildcat, have not thrived, asdetailed in Robin McKee's Guardian article.

For several years, conservationists have warned that loss of habitat, road accidents and – worst of all – the spread of domestic cat populations are having a devastating impact on the Scottish wildcat. Populations of a species which has earned itself a reputation for its aloof ferocity and independence are plunging to catastrophic levels. There are now fewer pure-bred Scottish wildcats than there are tigers in the wild. It is estimated only 400 or so survive in the wild, mostly in the Cairngorms area.

"Until recently, we thought there were about 3,500 wildcats in Scotland," says Dr David Hetherington, manager of the Cairngorms Wildcat Project which was set up to help save the species.

"But then a detailed study was done on animals that had been killed in accidents. It was found that only about 12% of them were actually pure wildcats. The rest were either feral cats or hybrids of wildcats and feral cats. As a result, we had to drop our estimate of wildcat numbers from several thousand to only a few hundred. That was the wake-up call to the seriousness of the situation."

"Wildcats disappeared in lowland England around 1800," says Hetherington. "Then they vanished from Wales and northern England around 1860. Finally, they went from southern Scotland. All we have left is a few hundred around the Cairngorms and places like the Black Isle. The trick now is to find a way to stop them from disappearing completely."

Felis silvestris are not disappearing from the Highlands, however. Felis silvestris of wildcat lineage are not disappearinig. As one of McKee's interviewees says, they just are not reproducing exclusively with cats of wildcat lineage: "The trouble arises when household animals go wild, mate and create colonies of feral cats. These form at the edges of villages and in farms. Some of these feral animals meet up with wildcats and they mate. Female wildcats become pregnant and give birth to kittens that are not purebred wildcats. Slowly, the species loses its unique status and vigour and animals become hybridised. That is the real problem today." 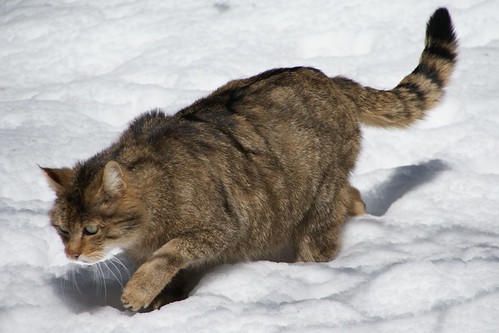 When I blogged about the Siberian tigers, I suggested that they were overspecialized--too large carnivores, living in too restricted and endangered an environment--and that barring extensive successful aid the species will not have much of a future. Yes, in the future I suppose that descendants of the domestic cat might repopulate that niche, but that the product of millions of years of evolution specific to the Siberian tiger risks being lost. That is not the case with the Scottish wildcat; a very strong case can be made to the effect that one subpopulation of a species is simply melding with another as a consequence of environmental pressures, genes flowing in both direction, in ways no different from previous migrations and assimilations within the greater felis silvestris population. Trying to reverse irreversible trends of intermixture between two clearly infertile populations is a waste. I think these activists--in Scotland, in Canada, around the world--would do better to protect the habitats of the animals concerned.
Collapse