Today's Canada Day is going to be a low-profile one for me: I'm drinking a red slushie and eating a small chocolate that came in red chocolate wrapping with my coffee, while I'll be setting fireworks off later tonight. Don't confuse this low-profile Canada Day for a lack of my personal happiness with Canada, mind: although I agree with Hannah Arendt when she said that she doesn't know any groups, only individuals, all in all I consider myself quite lucky and very happy to be a Canadian. Canada, by and large, is a country that works.

Two years ago I blogged about how Canada came about, ironically enough, because the different ethnic groups and provincial jurisdictions now comprising Canada wanted as much self-rule as possible. The Francophone Roman Catholics of Canada East (now Québec) wanted as much self-government as possible in order to avoid their assimilation; the Anglos in Canada West (now Ontario) resented the role that Francophone Catholics played in determining their domestic policies; the smaller colonies on the Atlantic shoreline were looking for some larger framework that could help guarantee their prosperity; and everyone, from sea to sea to sea, was looking for something that could keep them from becoming American in the aftermath of the Civil War and Britain's declining interest in its remaining North American possessions.

Canada was a jury-rigged polity, a best-case compromise, with a national anthem that (as

james_nicoll observed today) has completely different English and French lyrics, and an existence that (as Andrew Barton observed) is expected by any number of futurologists to come to an end any moment now. And yet, this unlikely project worked, and 143 years later it's still here, and Canada remains popular with nearly all of its 34 millions. Even a goodly number of Québec's separatists are so attached to Canada that they'd want an independent Québec to be in a fairly tight confederation with rump Canada. The idea of Canada has staying power. 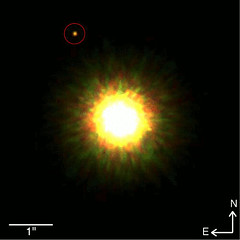 1RXS 1609b
Originally uploaded by rfmcdpei
Canada might not be a spacefaring power, like the United States, Russia, France/the ESA, or China, but Canada is certainly quite good with space science. Did you know that it was a Canadian team, using Canadian equipment in Canada, that was the first to discover an extrasolar planet way back in 1988? As I wrote last September, it's entirely true.

The announcement was made in the paper "A Search for Substellar Companions to Solar-Type Stars", submitted to The Astrophysical Journal by Bruce Campbell, George Walker, and Stephenson Yang, all three working out of British Columbian academic institutions and making use of the Dominion Astrophysical Observatory in the British Columbian capital of Victoria.

In their 1988 paper, Campbell et al made use of the radial velocity technique to study 16 Sun-like stars, examining to see whether or not an orbiting planet was tugging on its parent star, using a hydrogen fluoride mixture to help "steady" the spectrum of the star so as to measure more precisely. Of all these stars, Gamma Cephei A returned the strongest signal of a planet. Alas, these claims weren't very widely publicized.

To be fair, there was some uncertainty. In the 1992 paper by Walker et al. "Gamma Cephei - Rotation or Planetary Companion?", the claim was retracted, on the grounds that Gamma Cephei A's post-main sequence fluctuations in luminosity were probably responsible for the signal of Gamma Cephei Ab. Later in 1995, the aforementioned French team of Mayor and Queloz announced the 51 Pegasi b, a gas giant planet half the mass of Jupiter orbiting a main-sequence yellow dwarf broadly similar to Sol in a tight orbit, using a refined version of the radial velocity method pioneered by Campbell et al.

More than 200 exoplanets have been discovered since, all but a handful using variations on the precision radial-velocity technique pioneered at the University of Victoria. One of these planets orbits Gamma Cephei, just as Campbell and Walker suspected.

"Everyone in the field recognizes that Campbell and Walker were the first ones to see evidence for a planet around a Sun-like star in 1992," said UBC astronomer Jaymie Matthews. "Bruce and Gordon could have legitimately gone out and told everybody they'd found a planet." He sighs. "But being good scientists -- and maybe maybe being conservative Canadians -- they didn't make the proclamation that it was definitely a planet."

Their 1988 discovery was vindicated, happily, with the 2003 paper "Planet around [gamma] Cephei A", which definitively excluded the possibility that the signal of a planet orbiting Gamma Cephei A was spurious and concludes that the "most likely explanation of the residual radial velocity variations is a planetary-mass companion with 1.7MJ and an orbital semimajor axis of 2.13 AU."

Now, a Canadian academic led the team responsible for for one of the first photographs of an extrasolar planet. I found this image of the planet 1RXS 1609b--full name 1RXS J160929.1-210524 b--via Paul Gilster's Centauri Dreams post. A team led by Canadian David Lafrenière at the Gemini North Observatory reported the planet back in September 2008, but it was only until now that uncertainties of whether it actually orbited the star in question have been settled.

"Eight times as massive as Jupiter, it orbits a star much like the Sun but at a distance vast enough (300 AU) to place it well within the Kuiper Belt if it were in our own system." 1RXS 1609b's distance is one thing that makes it exceptional, along with its youth.

For one thing, the team’s subsequent work has shown that there are no additional planets of Jupiter mass or greater in this system, which makes the planet intriguing in terms of planetary formation models. Time again enters into the equation — as we continue observations for several more years, we should be able to learn more about the planet’s orbit, which will take more than 1000 years to complete. A circular orbit would imply formation at a great distance from the host star.

But a non-circular or unbound orbit would tell a different tale, indicating that the planet may have formed close to its star only to become involved in a gravitational encounter with another object that resulted in its being flung into the outer system. We do know that this is a warm place, with an estimated temperature of 1800 Kelvin (1500 degrees Celsius), much hotter than Jupiter. That’s consistent with the young age of the system (roughly five million years). The contraction of the planet under its own gravity, once ended, will let the object cool down by radiating infrared light, but it may not reach Jupiter levels (160 Kelvin in the cloud tops) for several billion years.

O Canada. But when will "New Canada" come about?
Collapse