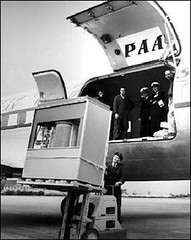 Unpacking the IBM 350 Disk Shortage Unit
Originally uploaded by rfmcdpei
A minor weakness of mine is for Star Trek tie-in novels, especially ones written by good authors. Doctor's Orders, published in 1990, was written by Diane Duane and thus fits both of my requirements. It's an endearing novel, describing how the Enterprise's survey of an unusual class-M planet is complicated by the disappearance of Kirk and the quirky regulations that placed McCoy in command. It's a fun novel, engagingly written in Duane's classic style and containing enough of the characters we're familiar with and enough interesting new scenarios to be an enduring item of pop-culture ephemera, even two decades after its publication. It reveals its age in only a single short passage delivered, in passing, in Kirk's pre-mission briefing of his officers.

Starfleet has kindly used this short layover to install an extra eighty terabytes of storage in the Library computers. I want to come hom wth that memory full, ladies and gentlemen. Be advised (26).

I re-read Doctor's Orders soon after I bought a one-gigabyte memory chip for my camera for $C20.

(Yes, this passage leapt out at me.)

At roughly the same time, I found this picture of the IBM 350 Disk Storage Unit, packaged for sale with the IBM 305 RAMAC computer, via this Marginal Revolution post. That's what five megabits worth of memory storage looked like back in 1956.

The 350 Disk Storage Unit consisted of the magnetic disk memory unit with its access mechanism, the electronic and pneumatic controls for the access mechanism, and a small air compressor. Assembled with covers, the 350 was 60 inches long, 68 inches high and 29 inches deep. It was configured with 50 magnetic disks containing 50,000 sectors, each of which held 100 alphanumeric characters, for a capacity of 5 million characters.

Disks rotated at 1,200 rpm, tracks (20 to the inch) were recorded at up to 100 bits per inch, and typical head-to-disk spacing was 800 microinches. The execution of a "seek" instruction positioned a read-write head to the track that contained the desired sector and selected the sector for a later read or write operation. Seek time averaged about 600 milliseconds.

The invention of the first hard disk, as this 1984 brochure from the San Jose CA Magnetic Disk Heritage Centre makes clear, changed everything for computing.

Making information directly available for computer processing on demand meant that no longer would processors stand idle while searches were made through reels of magnetic tape or data was punched into cards and sorted for processing. Removing these obstacles helped turn the promise of the computer into reality and set the stage for what has come to be called the Information Age.</blockquote>

The pamphlet has all kinds of wonderful photos of the research effort and descriptions of the extended research and development period of the hard disk. The pamphlet is worth reading, as a historical record and as an artifact of a time when computer technology was just beginning to become something truly remarkable, something that would open up into capacities undreamt of by people writing years even after the pamphlet's publication.

(The IBM 350 Disk Storage Unit would hold a single one of my photos, or a lossy mp3 from my archive of about nine gigabytes. Assuming Starfleet Command uses my camera chip for memory storage on Constitution-class starships, it would have cost the uniminaginable sum of $C1.6 million to properly outfit the expedition to 1212 Muscae IV with the eighty terabytes it was given. Surely that would be enough to hold all the information about the planet that you could want. That, or enough to store all of Kylie's dance remixes. Either way.)

I don't believe in the idea of the Vingean Singularity--the "rapture of the nerds," as John called it--but I am properly impressed by what the incremental improvements in our technology can lead us to. Respect.

GNXP's Razib Khan has a extended review of a recent survey of what could be called the transnational cosmopolitan culture of the Bronze Age Near East.

[T]he details of our knowledge of the Bronze Age world are due to the work of modern archaeologists and philologists. Aside from a few references in the Bible to an offshoot kingdom, the Hittite Empire had been totally forgotten! Dead cuneiform, once deciphered, brought back a world which had lain dormant for thousands of years. There are many elements of these lost civilizations which we comprehend only in spare fragments. For example in the fourth millennium BC it seems from the archaeological record that Mesopotamian merchants had colonies which replicated their culture in toto in Anatolia, while Mesopotamian influences through diffusion are indisputable in pre-Dynastic Egypt. In the 3rd millennium this cultural hegemony waned, and Egypt seems to have sealed itself off from outside influence until the 2nd millennium, while the Mesopotamian stamp on Anatolian society diminishes. But without full-blown writing we can only conjecture as to the dynamics of this period of the expansion of Mesopotamian civilization. By the time the light of text illuminates the world Mesopotamian culture had retreated in its complete form to Sumer and Akkad.

As it turns out, many of the elements that united the different civilizations of the era--fictive and actual kinship, gift-giving as a proxy for trade and substitute for war booty, and solemn sworn before gods of different but not yet incompatible pantheons--are not only used today, arguably even cementing the general stability of Europe in its long 19th century, but are used in ways quite recognizable to us early 21st century types. Egyptians and Mesopotamians and Anatolians and Minoans all managed to come together to form a metacivilization, again with potential implications for our 21st century world.

Mark Simpson's post begins with David Bowie's 1972 performance of "Starman" on Top of the Pops.

The key moment, for Simpson, is at 1:02, "[t]he bit where Bowie languorously and yet somehow matilly drapes his arm round the golden Mick Ronson on the ‘family show’ that was Top of The Pops [. . .] a very calculated and inspiring gesture of defiance back in July 1972, not just a bit of slashy titillation (though it was that as well)."

I don't think that Simpson is wrong in identifying Bowie as a huge positive queer figure, perhaps even in highlighting that particular moment as key.

If you can’t in 2010, in Gay Pride week, at a time when the Conservative Prime Minister has gay celebs round for drinks at Number 10, quite understand why this caused a sensation, and why millions of dads went apopleptic about ‘that fackin’ pooftah!’, bear in mind that just five years previously any and all male-male sexual relations were still illegal in the UK. The very first Gay Pride march had only been held a few days before Bowie’s own parade through the nation’s living rooms. Truth is, this single appearance by Bowie on Top of the Pops, a show watched by most of the UK back then – and every single kid that didn’t sing in the choir – was more significant and influential than all the UK Pride marches put together.

Would my readers agree with Simpson on his appraisal for the relative success of a queer Bowie in the United Kingdom versus the United States, I wonder?

The UK is a funny little small island, with far too much media per head – which since it lost its Empire takes far too much interest in superficial, ‘effeminate’ things like music and fashion and gossip. And, crucially, we’re basically a secular country and have been, more or less, since Henry VIII nationalised the monasteries. The UK is a country where the defunct popular tradition of Music Hall (which Bowie drew heavily upon) is probably of much greater cultural importance today than any of that dogmatic Pauline asceticism that calls itself ‘Christianity’.

And America? Well, America isn’t any of these things.

This is why the seriously flirtatious personal style of metrosexuality, which at the very least throws a langorous arm around the neck of bi-responsiveness – and which is much more David Bowie’s love-child than mine – really took root in the UK at the end of the Twentieth Century, largely without the muscular Christian anti-metro/anti-fag backlash that happened in the US in the mid-to-late Noughties. In the UK, metrosexuality produced new kinds of ‘starmen’ such as David Beckham – football’s answer to David Bowie.