I didn't know that we set off more than two thousand nuclear weapons, but thanks to Patrick Cain's link post at the now-defunct Map of the Week Blog I do now.


“1945-1998” by Isao Hashimoto is a video that maps 2,053 nuclear explosions — all but two of which tests — conducted across the globe; only North Korea’s recent tests are excluded, as they occurred after this video was made (2003). Each second represents a month of history — the 1950s and (especially) the 1960s were rather heavy decades for nuclear testing.

Concerns over nuclear proliferation aside, nuclear weapons aren't such an existential threat as they might have been in the 1980s, when the sheer level of overkill made it seem almost as if the nuclear powers' strategies were based around the truism that New Zealand and Charlottetown obviously deserved to die. Nuclear war ended up being displaced, in the popular apocalyptic imaginary, by concerns over environmental breakdown. And there are other replacements: the clash of civilizations, anyone?

So. What apocalyptic risks do you fear? Anything odd, anything unusual, anything just personal? 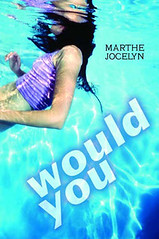 Marthe Jocelyn, Would You
Originally uploaded by rfmcdpei
I'd like to thank Edwards Magazine for hosting my review of Canadian children's author Marthe Jocelyn's compelling 2008 novel Would You. After her sister is left in limbo when she's hit by a car, teenager Natalie is forced to consider all the existential questions that no one wants to have to try to answer. Well-plotted, with interesting characters, and with a timeless theme, Would You comes highly recommended.
Collapse