I've blogged in the past about 1 Spadina Crescent, a University of Toronto building just north of Spadina and College in downtown Toronto that served as a theological college, a military hospital, and a pharmaceutical research centre, before serving as the home of the university's newspaper and Fine Arts department as well as the Ontario branch of the Eye Bank of Canada, is located directly north of this intersection. Most recently, the building's Gothic design was responsible for the tragic fall of a ghost-hunter. 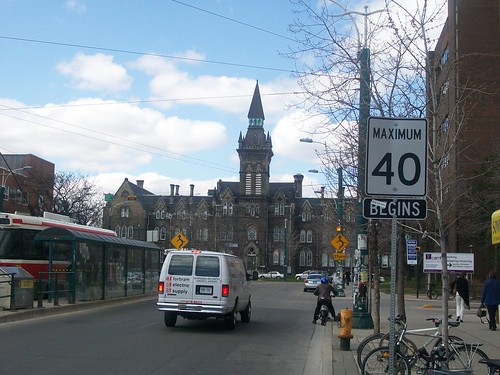 blogTO's Agatha Barc has written a potted history of the building, complete with pictures from Toronto and university archives.

Back in June I blogged about how Newfoundland's Fogo Island was trying to buck the trend of rural Newfoundland's population collapse by taking up niche tourism. The nearby community of Twillingate has actually managed something like that, with iceberg tourism being big. The icebergs haven't been coming this year.

The island town of Twillingate, Nfld., is home to less than 3,000 people, but its population swells to 30,000 each summer as tourists arrive to see majestic icebergs jutting out of the frigid North Atlantic, having drifted all the way from Greenland.

They are such a boon to the town that it calls itself The Iceberg Capital of the World. But this year, Twillingate has a problem: No icebergs. The tourists are mad.

There is more than just tourism at stake — the icebergs are also harvested for vodka, gin and rum, as well as bottled water sold in the Middle East.

“The iceberg has his own track, and maybe its own mind as well,” said Captain Cecil Stockley, a tour operator who calls himself Iceberg Man. “[Tourists] say to me, ‘I planned my whole vacation around it.’ It certainly is frustrating.”

An iceberg shortage is plaguing Newfoundland’s “iceberg alley,” a stretch of ocean off Newfoundland’s north coast. Back in 1912, more than 1,000 icebergs reportedly floated in the North Atlantic shipping lane, which includes the alley. In recent years, however, the locals in Twillingate consider it a good year if 12 or 15 icebergs float past.

It all depends on the ocean currents, wind patterns and how many icebergs set sail from Greenland in the first place, Capt. Stockley said.

“When they come in June and early July and they don’t see icebergs, they’re pretty disappointed,” said Fred Bridger, president of the Twillingate Islands Tourism Association. “But then they see what else we have to offer.”

In the absence of icebergs, tourists are pointed toward Twillingate’s rugged coastline, hiking trails and dinner theatre. Tourists are also enthralled with sightings of humpback and minke whales.

Sometimes, when I want to make light in a conversation, I talk about that most neutral of topics, the atmosphere. "Wow! The atmosphere's great today! Enough oxygen to breathe, not enough to start spontaneous fires, and there's plenty of nitrogen in the atmosphere to serve as a buffer." (Yes, I know.) As Paul Gilster explains at Centauri Dreams, that pleasant atmosphere was hardly a given for Earth in much of its recent history (and likely not for Earth-like worlds, too).

Some people believe that gigantism in some animal groups was the result of higher levels of oxygen in the atmosphere, the consequence of the colonization of land by plants. And some would argue that higher amounts of oxygen allowed vertebrates to colonize land surfaces. Today we’ve got an oxygen level of 21 percent, but we know the levels have varied greatly in the past 400 million years and have declined steadily since the middle of the Cretaceous.

Studying this has been tricky because we use geochemical models to estimate the level of atmospheric oxygen, and various models produce differing results. But new work just published in Nature Geoscience now shows that the amount of charcoal preserved in ancient peat bogs provides a measure of how much oxygen was available in the past and may be the best way to measure the phenomenon. The variation is striking. Charcoal found in coal has remained at concentrations between 4-8 percent over the past 50 million years, indicating oxygen levels similar to today. But some earlier periods show a charcoal percentage as high as 70 percent.

That latter figure implies, according to Andrew Scott (Royal Holloway University of London) that high levels of atmospheric oxygen would have been available to spread frequent, large fires in both the Carboniferous and Permian periods, from 320-250 million years ago, and the Middle Cretaceous, approximately 100 million years ago. Says Scott: “It is interesting that these were times of major change in the evolution of vegetation on land with the evolution and spread of new plant groups, the conifers in the late Carboniferous and flowering plants in the Cretaceous.”

We may be dealing with a self-perpetuating mechanism: Frequent, hot fires resulting from high levels of atmospheric oxygen could have caused more erosion and thus greater burial of organic carbon, which creates a cycle keeping oxygen levels high.

Chris Atchison's Globe and Mail article, starting from the southwestern Ontario city of London with its metropolitan area a conurbation of a half-million people, takes a look at the different strategies that mid-sized cities--anything smaller than Toronto and bigger than Charlottetown, I suppose--can take to keep their downtowns active. The right policy mix is key.

But revitalizing a tired downtown is an uphill battle that requires more than money – it takes time, strategic vision, a diversity of businesses and a realization that competing head-to-head with the likes of Wal-Mart is a non-starter.

“I believe making a main street from scratch or keeping a vibrant street in a small or medium-sized city is the most difficult task in city-making,” says David Gordon, the director of the School of Urban and Regional Planning at Queen’s University in Kingston, Ont.

“The market forces that are arrayed against you are very difficult to deal with.”

Over time, those forces – in particular the drive toward suburbanization – have slowly squeezed the life out of once-thriving downtowns.

“We did a survey seven years ago of planners across North America and we asked them to identify downtowns of medium-sized cities of between 70,000 and 700,000 people which were in a bad state, unhealthy or declining, and it was virtually all of them,” Pierre Filion, a professor at the University of Waterloo’s School of Planning, recalls.

“There was only about 10 per cent that were doing well.”

Despite the bleak assessments, cities across the country are making progress in transforming dilapidated downtowns. The key, say urban planners, is to understand that injecting new life into a downtown core takes a careful blend of innovative tinkering and visionary planning.

Among Atchison's suggestions i9nclude acceptance that the old shops that once filled the downtown aren't coming back and looking for replacements, and promoting the downtown as a space for events like festivals and a place with good infrastructure. Having looser regulations on development and lower taxes and fees doesn't hurt, either.

The two left-leaning Torontonian Facebook friends who linked to the Toronto Star article reporting that erstwhile politician John Tory, who last appeared here after deciding not to compete with George Smitherman for the position of Mayor of Toronto after having humiliatingly lost a by-election in a safe riding that would have given him the seat that he'd needed to lead Ontario's Progressive Conservatives, is considering a run for mayor. James Bow, among others, likes this idea; Bow thinks that Tory, his nominal party affiliations aside, is better placed than any of the candidates actually running to continue Miller's policies.

Toronto in 2003 had serious structural problems that ensured that it would always struggle for funds in the face of mounting infrastructure problems and hefty social service burdens. David Miller helped make a number of changes to the structure of council and the powers of the city that made council and the mayor’s office better able to respond to the issues. This was thanks, in part, to working with McGuinty on a new City of Toronto Act. I believe that on most of the critical decisions that took us from there to here, Tory would have done much the same, and thank God for that.

But two terms on, it can be argued that it is time for a change. For all the good that Mayor Miller has done, and for all the challenges he has faced down, he has spent considerable political capital to get where he is today, and the well may be running dry.

Ironic though it may be for me to say, it seems to me that the candidate best suited for continuing the good work that David Miller has managed to achieve in building Toronto, in spite of a city council that remains highly dysfunctional, is John Tory — the man Miller beat for the job. Like Miller, Tory is intelligent, and able to build a broad base of support. He may even be more of a consensus builder than Miller (despite his lack of electoral success at the provincial level, he did manage to herd the cats of the Ontario Progressive Conservative caucus). Most importantly, he is one who has, by and large, stayed out of the political fray on city council for the past seven years. His ideas are still fresh, and he has great potential to do much good for the city.

Whether or not Miller's policies were good is another question, one I'll leave to my readers.

I've a post up at Demography Matters noting--after another blogger--how Ahmedinejad's baby bonus won't do anything to reverse the ongoing slide in Iranian fertility, and that trying to enforce traditional gender and family norms will do more harm in the long run.
Collapse