Conservapedia's article on the theory of relativity, I discovered via Chris Mooney at The Intersection, is dominated by the thesis that general relativity is basically a fraud, supported by big-government science and liberals. Yes, really. Joe Hamm at Climate Progress had great fun with this.

Yes, there is a Conservapedia and its main benefit to society is that it apparently occupies the time of the great many conservatives who post meticulously-footnoted articles like the one above, titled, “Counterexamples to Relativity.”

It is hard to know what is the most mind-boggling thing about this particular article. Footnote 1 reads:

See, e.g., historian Paul Johnson’s book about the 20th century, and the article written by liberal law professor Laurence Tribe as allegedly assisted by Barack Obama. Virtually no one who is taught and believes relativity continues to read the Bible, a book that outsells New York Times bestsellers by a hundred-fold.

Really? The Bible outsells The Girl with the Dragon Tattoo by a hundred-fold? Well then it must be literally true word-for-word. That’s how we know, for instance, that the Sun moves around the Earth. But still, I am puzzled how this is a counter example:

Newton's theories, it seems, are all that are needed.

What is with movement conservatives and their love of pseudo-science, apart from the obvious possibility that they love having their beliefs confirmed?

Speaking as someone from a small town (by Canadian, not Island, standards) who loves Canadian Chinese food with its egg rolls and chicken balls with red sauce and fried rice with chicken, Katherine Laidlaw's article "Museum probes link between Chinese restaurants and small-town Canada" in the National Post certainly caught my attention. Who knew that Chinese restaurants played such a critical role?

Kitschy restaurants such as the Tams’ are ubiquitous across Canada, a chain of unexpected strongholds of Chinese-Canadian identity stretching across the country. A Chinese restaurant features prominently in CanLit classic Who Has Seen The Wind by W.O. Mitchell. Joni Mitchell wrote Chinese Café/Unchained Melody, singing “Down at the Chinese café/we’d be dreaming on our dimes.”

There’s one in nearly every Canadian city and town. And yet some argue the Chinese landmarks, a mix of Western and Eastern cultures and born from struggle and exclusion, are fading from Canadiana. “A lot of these cafés have closed,” says Victor Wong, executive director of the Chinese Canadian National Council. “The old-timers have passed away and their children are off to the cities, where they’re welcomed as young professionals.”

Linda Tzang, cultural curator at the Royal Alberta Museum, said the travelling exhibit will encourage its viewers to consider why these restaurants, in the face of widespread racism toward the Chinese, have now grown into an anchor of many communities, not least because of their unique brand of Cantonese “chop suey” cuisine, which is not traditional Chinese, but deliciously deep-fried and sweet.

“When I was looking at Chinese restaurants in Alberta, what struck me was almost every tiny town had at least one and sometimes two,” Ms. Tzang said. “It goes against stereotypes of what a small town is, how Chinese people work socially, how Chinese culture works.”

The industry even supports a magazine called Chinese Restaurant News; in 2005 it reported there were three times as many Chinese restaurants as McDonald’s franchises in the United States. There’s no comparable statistic here but Lily Cho, an associate English professor at the University of Western Ontario and author of Eating Chinese: Culture on the Menu in Small-Town Canada, says she’s never visited a Canadian town that didn’t have one.

Many Chinese workers were employed building the Canadian Pacific Rail line into the early 1900s. But in 1923, Parliament passed the Chinese Immigration Act, restricting Chinese immigrants from entering Canada except under the titles of merchant, diplomat or foreign student. Shut out from professional occupations and farming, many dispersed to communities along the CPR line, some opening laundromats and grocery stores, but most realizing that they could support their families running restaurants, particularly in the Prairies, where the cafés often had no competition.

Edmonton writer Bill Mah recalls his childhood growing up at Eddie’s Café and Confectionary in Alberta, eating family meals in the café kitchen and sleeping below the restaurant owned by his parents. “For me, the little red-brick restaurant on the main street of Killam during the 1970s was the place where my mother and father cooked and served breakfast, lunch and dinner, mostly on their own while raising three young boys,” he wrote in Wednesday's Edmonton Journal.

Daniel Little's post at Understanding Society starts to go interesting places--the kinds of places I'd like to go, honestly--about the links between literature and the social sciences. What does each reflect of the other? What can be understood of the other discipline through the reflection process? Literature can produce perspectives, drawn from different places (the narrator or the point of view, the author), that can be studied in systematic fashion.

Can a work of fiction have realistic, referential content? Is a novel sometimes an empirical statement? Can a fictional character truthfully represent aspect of what it is like to be black in America, South Asian in Manchester, or gay in a suburban Illinois high school? For that matter, can a novel be faulted for "getting it wrong" -- for example, for representing an American Muslim as being completely oblivious to issues of racism? Or is "right" and "wrong" out of place when it comes to evaluating the relationship between a novel and the world?

Here is one possible answer: fiction is always fiction, and normally does not have empirical validity. If we want to make empirical statements about social relations, class attitudes, or typical social values of specific groups, we need to do so based on valid methods of social research: surveys, focus groups, interviews, and observations of behavior. And we need to analyze the data we collect according to valid methods of aggregation and inference. That is what is required in order to arrive at knowledge about the social world.

Another very different response goes along these lines. Novelists are sometimes skilled social observers, and some of these are also skilled "painters" or evokers of what they have seen. A great novelist can pull together his/her many insights and observations into a powerful description of a fictional world or experience that captures an important sociological truth about the society depicted. So these novelists do in fact gain knowledge of social life through observation, and they represent that knowledge through the fiction they produce. Both parts of this epistemic process are subject to criticism; but both are valid knowledge practices.

According to the second view, readers have the possibility of gaining real knowledge about the social world through the novel. Seen in this way, a novelist is somewhat akin to an ethnographer, trying to make sense of a complex system of behaviors and meanings and expressing his/her findings in a way that is truthful to the social reality observed.

The Globe and Mail's Andrew Steele speculates about the possibilities surrounding a certain Canadianization of the Internet, starting with the first successful legal prosecution against a member of the infamous 4Chan.

4Chan, the poster boy of anarchy on the web, is in fact a regulated place where one’s identity can be determined and legal consequences exacted.

According to testimony by founder Christopher Poole in the case of the 4Chan user who hacked Sarah Palin’s email account, there are significant opportunities to identify and prosecute users.

For instance, weblogs are maintained and will be provided to government officials following a request by law enforcement. They will show when a particular user made any posts, using their IP address, an identifier assigned for your computer when it logs on to a computer network.

The testimony lays out in detail how 4Chan and law enforcement can easily identify who is saying what on 4Chan by using logs and the IP addresses assigned by Internet service providers.

The anarchy of 4Chan – and the Internet generally – is both terrifying and astonishing. Certainly, the debates on the The Globe and Mail's comment board are legendary, both in their quality and occasional lapse into the personal and inappropriate.

But clearly, the illusion of anonymity is at the heart of that creative anarchy.

As the illusion begins to crumble – as those who use the Internet begin to run up against the reality of prosecution and incarceration for their crimes, or public humiliation for their ill-conceived statements – that anarchy may subside.

The creativity that comes with not caring about the consequences of what you say could end. Perhaps the Wild West Internet will soon begin to look a little more like Canada’s Prairie expansion, with the RCMP imposing some civility missing from the American experience.

annafdd for linking to this video. The cute. 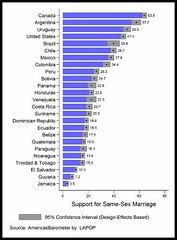 Same-sex marriage support in the Americas
Originally uploaded by rfmcdpei
I came across this Americas Quarterly infographic via Towleroad and the Box Turtle Bulletin.

With public policies toward gay marriage varying widely, this is a critical moment to look at citizens’ opinions with respect to same-sex marriage. First, we examine levels of support for same-sex couples having the right to marry. Then, we assess both individual- and national-level determinants of variation in that level of support. Analysis is drawn from data from the American Public Opinion Project (LAPOP) survey, which includes 42,238 respondents from 25 nations in North, Central and South America and the Caribbean were asked this question:

How strongly do you approve or disapprove of same-sex couples having the right to marry?

In the associated essay, Lodola and Corral argue that support for same-sex marriage in Latin America--as elsewhere, I'd argue--is linked strongly to relative wealth, high levels of education, urbanization, non-membership in evangelical sects, and youth.

Seligson and Morales argue on the basis of polling data that the general trend is for the young in seven South American nations and one Central American-- Colombia, Ecuador, Peru, Bolivia, Brazil, Paraguay, Uruguay, Argentina, Costa Rica--to be increasingly more tolerant.

There is a cluster of populous countries (Brazil, Chile, Mexico, Colombia) showing significant support for same-sex marriage not too far from the levels evidenced in the United States. Mexico City legalized same-sex marriage and just had its marriages recognized througout Mexico, while the legal situation facing GLBT rights is Brazil continues to improve. I know I'll be waiting for news from Chile and Columbia!
Collapse