I caught the 6:40 showing of Scott Pilgrim vs. the World at the Yonge and Eglinton SilverCity with Andrew last night, and found myself very pleased with the experience. Edgar Wright's screenwriting and direction did an excellent job of compressing Bryan Lee O'Malley's sprawling saga into a movie two hours long, keeping the flavour of the graphic novels and the core of the story. The actors were uniformly good, Ellen Wong's Knives Chau sticking out particularly, and Michael Cera continuing to tap the geek credentials that have made him a star. The action, too, was well-paced, with special effects usage gauged perfectly.

At least as importantly, Scott Pilgrim is a Toronto film, a quasi-documentary, almost, showing the places in Toronto that I know. "They make movies in Toronto?" one of the characters asks before they go off to see Scott fight Lucas Lee at Casa Loma. They listen to Clash at Demonhead at Lee's Palace; they hang around the intersection of Bloor and Bathurst, eating pizzas and placing phone calls; they browse the CD racks at Sonic Boom; Wallace and Scott live in a basement apartment in a neighbourhood that looks like any of the neighbourhoods that I've lived in. It's a Toronto film, and the audience loved it for that. It's a film abut our home.

Home is a concept I've been thinking about a lot. Me and my friend Christine count as Prince Edward Islanders, and a few years ago we both moved to Ontario for greater opportunities. Home, though, wasn't in Ontario for Christine and hers. It was the Island.

Our lives in Ontario were good and we did enjoy some of this “more” (and we even lived in close proximity to Lake Ontario, satisfying my water need), but I found myself surprised to crave the “lesses” of PEI: less noise, less consumerism, less stuff. We had our first child in Ontario and have shared some wonderful memories there, but when I, along with many in the doomed economic year of 2009, was laid off, we took it as a sign to return to our less-is-more homeland.

Now, a year and a half later, we are happy. Atlantic Canada is known for its unique sense of community, and there’s no stronger word for what we feel connected to on PEI. We live in a tree-enclosed, isolated neighbourhood where neighbours become friends, even the dogs know each other, and everyone waves when getting the mail. Whenever we venture out, whether to a local farmers’ market, the beach, downtown Victoria Row, or just a local playground, we often see friends and neighbours. We became friendly with our next-door neighbours because our kids (who were refreshingly and blissfully unaware of social protocol) would wander into each others’ homes.

I get the same general sense of community here in Toronto, albeit in a more dispersed and less concentrated manner, friends scattered over neighbourhoods and casual relationships perhaps being more superficial, but with a greater density of possibilities. In the end, it doesn't matter: Toronto makes my heart skip beat, as Prince Edward Island may well do for Christine, and we're equally happy with our choices.

And you? Where's your home? Is it the place of your birth, is it someplace you've chosen? Discuss. 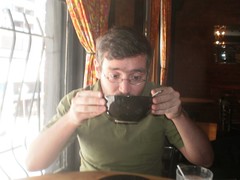 Me, 7 West, and a coffee bowl
Originally uploaded by rfmcdpei
I have Michael to thank for introducing me to 7 West (7 St. Charles Street West), with its 24 hours operation and its great menu. I particularly like the coffee options: you can get a bowl (yes, a bowl) of coffee for just three dollars. (Michael took the picture.)
Collapse