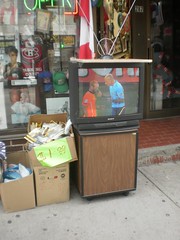 The game on the street
Originally uploaded by rfmcdpei
On the Sunday that saw the day of the World Cup final, I was Andrew were walking on a route along Gerrard Street that would eventually take us to the Main Street TTC station. The sports bars along the route were crammed with people in front of TVs, watching the game. Just after we turned north from Gerrard onto Coxwell, leaving Little India, I saw that a dollar store had left a television showing the game out front. Yes, people were watching the game which, I was told by one of the spectators, was still tied fifty minutes in.</a>

Renee Jeffrey in The Australian has an interesting analysis of what the decision of Japan's Prime Minister, Naoto Kan, to not visit the very controversial Yasukuni Shrine with its memorialized war criminals means.

At stake is the question of what constitutes an authentic political apology. At its most basic, a political apology entails an explicit acknowledgement that an injustice has been committed, an expression of remorse, and an undertaking not to repeat the offence, tendered by an official representative of the state or other political group.

By any measure, Japan has fulfilled each of these criteria many times over. But its critics complain that Japan's actions often belie its words. They object especially to the many visits by members of the Japanese political elite, including prime ministers, to the Yasukuni Shrine.

Built to honour Japan's war dead, the shrine honours the 2.5 million people who died fighting for the Emperor of Japan, including 14 Class A war criminals and 1068 others convicted of war crimes after the war.

Japan's critics point to the Yasukuni visits as evidence that Japanese expressions of remorse are insincere. In this respect, Kan's other declaration of August 10 is highly significant.

In his statement, Kan announced that neither he nor his cabinet ministers would visit the Yasukuni Shrine during his tenure. "As Class A war criminals are enshrined there," Kan noted, "an official visit by the prime minister or cabinet ministers is problematic." With this, Kan has removed one of the primary obstacles preventing the victims of Japan's wartime aggression and atrocities from accepting its repeated apologies as genuine.

A popular CBC-TV program shot in Newfoundland will now be seen in Australia.

The Republic of Doyle, seen each Wednesday night on CBC, has been picked up by the Australian Broadcasting Corporation.

ABC Australia has yet to announce a specific date when it will begin airing the show.

Do any Australians know anything more about this? Republic of Doyle has been renewed for a second season so I'm not that surprised, but then, Republic of Doyle is so rooted in place I'm surprised anyone outside of Canada (Atlantic Canada, even) bought it.

One source described the past weekend as a "box office showdown between Scott Pilgrim vs. the World, Eat, Pray, Love, and The Expendables." Notwithstanding that the film scored 81% at Rotten Tomatoes and had all kinds of positive press and a rabid fan base, the film has done very badly.

The box office numbers are in and Scott Pilgrim vs. the World isn't just flop, it's one of the biggest bombs of the year. On the internet it's been nothing but hype for months, but that hype only translated into a dismal fifth place opening and a $10 million in earnings which only got harder to earn as the weekend went on. Scott Pilgrim made almost half of its total on opening night. Not exactly an encouraging figure if you're hoping it'll make more money with momentum built through word of mouth. When it comes to momentum, there is none. Barring some overseas miracle there's no way it'll ever make back it's $60 million budget theatrically, and if you're a fan of director Edgar Wright's work, you're either busy convincing yourself that box office doesn't matter (it does, he'll have a harder time getting the money he needs for his next project now) or you're sitting around wondering just where it all went wrong.

A few years ago, Serenity also scored an 81%, also had all kinds of positive press and a rabid fanbase, and likewise didn't do well. The author says that Scott Pilgrim's apparent financial failure--not an artistic failure--didn't come from a lack of promotion, but from its narrow audience, aimed not only at geeks of a certain age but at a specific subculture of geeks.

People say it's become cool to be a geek. That's not true. People have just started applying the word geek to cool people. Hipsters aren't geeks and geeks aren't rock musicians and rock musicians aren't old school gamers and aging gamers don't like musicals. In a perfect world none of that would matter and people would simply show up to the theater and be blown away by the innovative level of creativity on display in Scott Pilgrim, but you have to get them there first.

Maybe Universal could have lied more in the marketing, but it's hard to fault them for being honest about the movie they had to offer. They were proud of Edgar Wright's work, and advertised it accordingly. Deadline says Universal knew it would flop, but they also knew it was good, and simply didn't care. Perhaps they're banking on it finding new life as a massive cult hit on DVD, and that's exactly what it deserves to be. To make that happen, it's up to you and me. Scott Pilgrim's a flop and it'll take a minor miracle to turn that around before theater owners give up and stop showing it. But maybe, if it's lucky, Pilgrim will find new life somewhere down the road as a must-see Netflix rental. When it hits Blu-ray, buy it and force it on your friends. Whether they're potheads or nerds, ravers or comic book readers, they'll thank you for it. It's Scott Pilgrim fans vs. the World.

Once, I remember Joe. My. God quoting five hours as the maximum amount of time someone could hang out in a WiFI-equipped coffee shop, after having bought a small coffee, before being asked to leave. This Extraordinary Observations post makes an interesting point about those people (myself not included, hopefully; I try to buy a second cup if I'm going to stay for longer, especially if it's a small indie place like the Linux Caffe). If customers are staying too long and buying too little, why not try to foster an environment where the customers will want to do something more. How?

I don't own a coffee shop (although one day I might like to) and I'm sure there are challenges that the typical customer, even someone who visits all the time, has no idea exist. I get that. But doing things like covering up outlets and turning off the Wifi is essentially punishing 20 good customers to take care of 1 troublemaker (I'm making up these numbers). The 20 good customers are probably sympathetic to the shop owner, and annoyed that some jerk is perpetually hogging space. But the old middle-school explanation that one bad apple ruined it for everyone doesn't quite fly.

The situation reminds me of the 'seat hog epidemic' going around on public transit systems across America. Most of the articles talk about the passive-aggressive approach that upset riders take: making nasty faces, posting photos on the web to 'shame' the seat hogs, etc. As it turns out, many people have come forward and pointed out that all it usually takes to sit down is to politely asking the seat hog 'may I sit down?'.

Daniel Metcalfe's book excerpt at Open Democracy takes the reader to the Uzbekistani city of Moynak, once a pleasant fishing- and tourism-oriented city on the coastline of the Aral Sea, now an environmental disaster with the coastline's recession by forty kilometres.

It was a famous holiday resort, the Crimea of Central Asia. In summer, several flights a day brought Soviet citizens to the beach. At the time, writer Viktor Vitkovich described the Aral Sea as ‘exceedingly pure, as deep and delicate as aquamarine, but without the touch of green, as intense and bright as Badakhshan azurite, and as translucent as sapphire’. The entire town lived and worked with the sea and its related industries, packing and canning. Without the sea, the town was as good as dead, and I did wonder how a town with no means of livelihood and almost 100 per cent unemployment could be anything other than that. The only vague hope for Moynaq was tourism, but even that wasn’t exactly the healthy kind.

As we hoisted up our bags, we noticed the deathly quiet. There was just no one around, no cars, no sound. It was like a Sunday afternoon in mid­summer, when everyone should be away – but holidays were a luxury no one could afford. Everyone was still here. So where were they? The wind swirled the sand and the odd bit of metal clacked, increasing the silence. But there was no birdsong. The road ran straight ahead between two rows of run-down housing, the tarmac obscured by drifts of sand that crept silently.

Bohodir and I started the trudge to the hotel, passing one or two bent-backed women with babies.

The population of (supposedly) 9,000 had been whittled down to a few mothers and children. The only men I could see were a crowd of puffy-faced drinkers at the taxi rank.

It felt like walking through a film set: a broken tractor on its side, a train carriage rotting on the street, miles from its track, bleached skiffs parked on the pavement, their wood split and tackle rotten. I recalled that Morrissey lyric, ‘This is the coastal town. That they forgot to close down . . . Come, Armageddon! Come!’

I've a post up at Demography Matters reporting on the Canadian federal government's ridiculous desire to jettison the mandatory long-form census on alleged privacy concerns. The information provided by the long-form census is crucial if society is to know itself and government is to try to plan to everyone's benefit.
Collapse