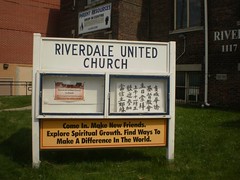 RIVERDALE UNITED CHURCH
IS CLOSED
We have gone out into the world
where Jesus has called us to go!

The Winnipeg Free Press' Bill Redekop has an interesting travelogue describing his visit to Iceland. Perhaps unsurprisingly, the prominent (if absolutely small) migration of Icelanders to Manitoba in the late 19th century helped create an enduring bond between the West Nordic island-state and the Canadian province.

The province has the largest population of Icelandic descendants outside the mother country. And so living in Manitoba, even if you're not Icelandic, and I'm not, you can't help but hear about Iceland through all the festivals, the place names, the cultural associations -- and the chest-pounding by people of Icelandic descent.

So while I was walking past Reykjavic's oldest cemetery on a street called Sudurgata, on my way to an interview, I found myself checking off the surnames on the ancient headstones as I went by, thinking, "I know all these names. I've been seeing these names all my life."

Katie Parsons proves my point that Manitobans feel Icelandic by osmosis. There are an estimated 100,000 or more Manitobans who can trace at least some roots back to Iceland. She isn't one of them. But that didn't stop her from falling in love with the country.

"I had a number of Icelandic friends introduce me to the Sagas (historical prose of early Icelandic history) and show me pictures of Iceland, and, at 16, decided that's where I wanted to go," said Parsons.

So she got a scholarship from the Icelandic government to study the language at the University of Iceland. She then obtained her master's in translation. Today, Katie lives and works in Reykjavik, translating historical, business and natural history texts.

"Living here is the only place I've ever had the comment that, when I say I'm from Winnipeg, people reply, 'Isn't that south of Gimli?'"

What the subject line says. I've saved some of these blog posts for a while, but I don't think they're stale.