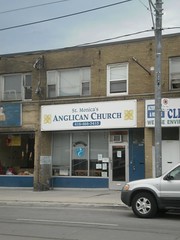 Iqaluit's Anglican St. Jude Cathedral is apparently on the verge of being rebuilt, and what a unique piece of architecture it is (and will be again).

An Anglican church being built in Canada’s north is taking on an unlikely shape: a traditional igloo crowned by a spire and cross.

The igloo, made of wooden blocks and steel instead of ice and snow, is a replica of an Anglican church that was built in 1970 but destroyed by arson in 2005.

St. Jude’s Cathedral in Iqaluit, N.W.T., on Baffin Island, was established in 1970 when Queen Elizabeth helped break ground with a silver spade, alongside the Inuit carpenters who built the original church. But 35 years later, the church was destroyed by arson and Iqaluit’s 4,000 registered Anglicans feared they would lose their most iconic structure — the Inuit snow house topped with an Anglican spire. Inside, the igloo church were an altar and communion rail made of qamutik sleds, decorative narwhal tusks, sealskin and soapstones, many of which were salvaged from the fire. The Christian services are given in English and Inuktituk.

“It’s a unique icon of the Inuit people of Iqaluit and the diocese,” said Andrew Atagotaaluk, Bishop of the Arctic. “It’s important this be special both materially and in ministry. It reaches out to various people in the community…. It was important we keep to the original design and keep the cultural aspects of the cathedral.”

The design of both the original and newer, more modern church reflects the unique blend of cultures in the region. The Anglican Diocese of the Arctic is the largest in the world, covering the Northwest Territories, Nunavut, Nunavik in northern Quebec, an area of four million square kilometres and 80,000 people. According to the Anglican church, there are 40,000 registered Anglicans in Canada’s Arctic and the vast majority are Inuit.

A 2001 picture of the original structure is visible here.

Wired Science's Brandon Keim reports on a new study suggesting that Martian agriculture is feasible, notwithstanding the very different physical conditions of that world, including some which could create problems never before experienced (or even hypothesized).

Growing plants in soil on Mars might seem old-fashioned for those raised on the futuristic prospect of hydroponic or aeroponic agriculture, in which crops sprout soil-free nutrient broths or mists.

But in recent years, starry-eyed biologists have come to appreciate the importance of soil-dwelling microbes to plant roots and soil processes. Moreover, soil-based agriculture is backed by thousands of years of human-based research and development, and millions of years of natural evolution.

“Mechanical systems are very reliable over short-term expeditions,” said Maggi. “But soil can control itself. In terms of operation error, it’s more reliable. Plants provide more benefits in terms of energy and health. And real soil performs operations that other systems cannot.”


However, there are many unknowns about extraterrestrial agricultural biology. Among the most important is how low gravity will affect the flow of water and nutrients, and in turn microbes. Once water and nutrients get into the plants, capillary action will take care of the rest. But getting them there is the key.

The simulation suggests that slower water transport is actually a good thing, preventing water from falling through the soil and being lost, along with the nitrogen it absorbs on the way.

At Mars gravity — about one-third of Earth’s — up to 90 percent less water would be needed than in a terrestrial greenhouse, said the researchers. Much less nitrogen would also be needed.

“You don’t have a leaching of nutrients. The nutrients you put into the soil, remain in the soil. You don’t lose them,” said Maggi. The simulated bacteria thrived on all this extra food, reaching densities between five and 10 times the usual.

One recent illustration of the ways in which ethnicity and religion are intertwined comes from the geographically central if culturally and economically marginal small Québec city of La Tuque, where the Anglican (Church of St. Andrew Apostle and Martyr is about to be closed down.

St. Andrew is a parish in the Anglican Diocese of Quebec, which covers most of the province of Québec outside of the city of Montréal, i.e. the almost wholly Francophone regions of Québec where the English--ethnic English, not Anglophone since that language community also includes Scots and Irish and English of various non-Anglican Protestant backgrounds--have always composed a very small minority. Even the Diocese of Montreal, seat of Québec's Anglophone minority, is itself isn't doing very well at all. The English population in the Deanery of Quebec has been declining that much more quickly, likely through a combination of out-migration from the former mill town and assimilation (cultural and religious) into the Francophone Roman Catholic majority. And so, the parish is being wound down. Perhaps fittingly, the only article on the parish's closing that I found on Google News came from the French-language Le Nouvelliste. See the translation below.

Resigned, the faithful Anglicans La Tuque have accepted the disappearance of their place of worship for one hundred years, a leading institution in the Anglophone community of Haute-Mauricie.

The church will finally desanctified on October 2 during a ceremony to be chaired by the Anglican Bishop of Quebec, the Right Reverend Dennis Drainville.

"All the faithful of the Church of St. Andrew have accepted this reality. We are no longer numerous enough to sustain our church, "says the warden of the Anglican community of La Tuque, Anthony Hudon.

"There remains no more than thirty faithful Anglicans in La Tuque."

Activity has been slowing down nearly a year at St. Andrew's. The last religious service was held October 21, 2009. What was the last mass of the small wooden church was celebrated by the Rev. Jason Pollick.

Built between 1910 and 1911, the Church of St. Andrew reveals the past strength of the Anglophone community in Upper Saint-Maurice.

"The Anglican community in La Tuque is very limited and in steady decline for several years. The parish and the diocese can do no more and no more in the future can deploy the necessary financial resources to ensure the protection and conservation of the church or the rectory adjoining. Repair costs are very high. Far too high for us," explained last March the archdeacon of the Anglican Diocese of Quebec, Garth Bulmer.