I walked down on Yonge Street the day after the G20-related riot back in June, I suppose as a disaster tourist. The street looked fine until you got as far south as College, where the plywood began to appear. 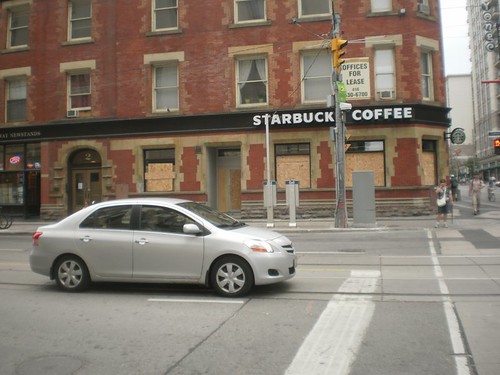 The windows of the Starbucks at Yonge and College, naturally, were all smashed in. 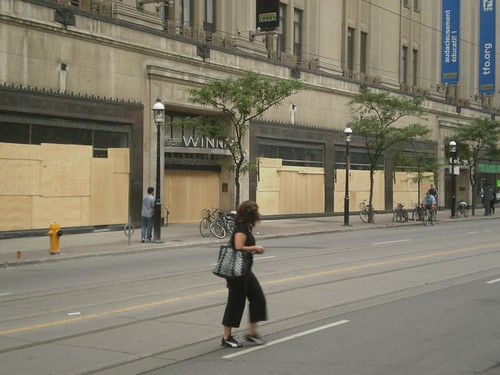 The north face of the College Park complex at the same intersection, hosting a Tim Horton's at the corner and a Winners department store further on, also got its share of vandalism. 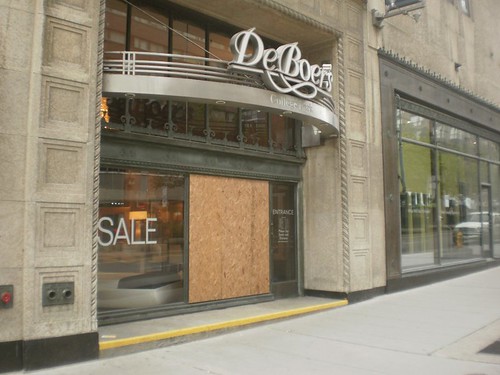 Here, too, on the Yonge Street face. 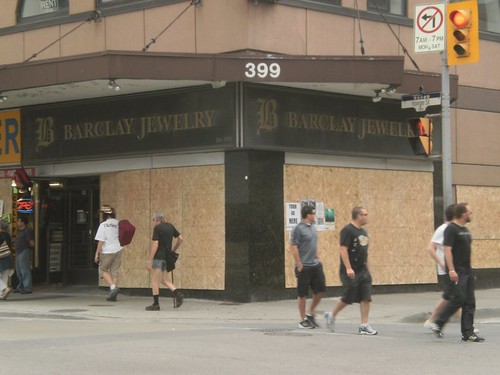 I saw a retweet from @seanwinslow testfying how the store's owner could be seen, almost in tears, outside of the broken windows of his shop. 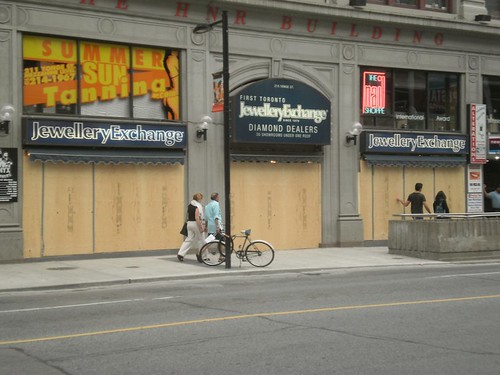 I assume that this shop got attacked because it had something to do with jewelery, but I suspect I'm overdetermining the Black Bloc's thought processes. 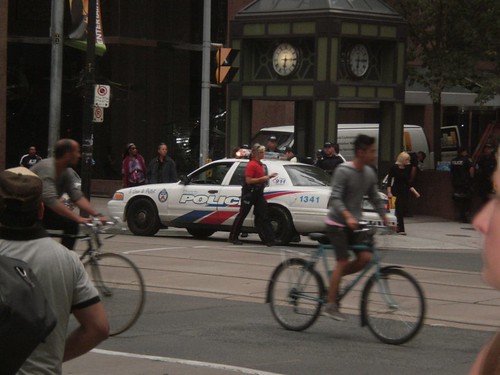 By the time that I got down to Yonge and Queen Street, the police were present, perhaps mobilizing for the controversial mass arrest at Spadina later that afternoon, certainly maintaining a visible presence. Yonge below Queen looked fine, if empty.

Environmental factors, lack of cooperation and overfishing have caused a sharp fall in catches of squid in the southwestern Atlantic ocean, the most important fishery in the world for this species.

In the first six months of this year, the squid catch fell by 50.4 percent compared to the same period in 2009, which had again been a very bad year compared to 2008.

In the first half of 2009, 58,000 tonnes of squid were caught, but the amount dropped to 29,000 tonnes in the first half of this year. In 2007, the Argentine fishing fleet alone caught 232,000 tonnes, while even more was caught by foreign ships operating just outside the exclusive economic zone, which extends up to 200 nautical miles from the shore.

Exports of squid, Argentina's second largest fisheries export after hake (Merluccius hubbsi), contracted 68 percent by volume in the same period of this year, driving prices up.

Companies, environmental organisations and scientists agree that rather than a single cause, a number of factors are impacting on this short-lived species which is highly sensitive to changes in its habitat.

Squid, regarded as a delicacy served stuffed or as fried rings, live for about a year. After mating, females release fertilised eggs onto the sea bottom, and hatched juveniles continue the cycle in the next season.

Joe. My. God. announced that today is the twentieth anniversary of the Pet Shop Boys song "Being Boring", a fantastic song that was the subject of a [MUSIC] post almost exactly one year ago. The Bruce Weber black-and-white music video is great, but the live Jools Holland performance video below is more than good enough to be embedded.

In the panoramic lyrical sweep from the 1920s to the 70s and, finally, the 90s, Being Boring really is about everything: innocence and experience, ambition and self-realisation ("I never dreamt that I would get to be/The creature that I always hoped to be"), love and (AIDs-related) loss ("All the people I was kissing/Some are here, some are missing"), friendship, nostalgia, ennui and, of course, defiance ("We had too much time to find for ourselves"). Tennant's plaintive vocal style only adds to the pathos. And it's all infused with the glamour and spirit of writer Zelda Fitzgerald (whose 1922 essay, Eulogy on the Flapper, contained the song's ideological kernel: "She refused to be bored chiefly because she wasn't boring.")

Greatest single ever, you ask, really? Aren't we dealing with something intangible here? Yes, but if art exists, as the writer Annie Dillard argues, "to make the stone stony", what could be stonier? Being Boring has followed me through my own teenage parties, student days, fumbled relationships and drunken evenings. In the summer it feels nostalgic, rose-tinted; in the winter it's a sun-beam, a cause for celebration. "I remember dancing to this," says one of the hundreds of comments on YouTube, "and I'd get tears in my eyes thinking of all the friends and lovers I've lost, where my life has gone and where it ended up." In short, does another song evoke, so perfectly, the sigh of experience with the hope of living?

Joe, for his part, observes that the song's sadly very relevant in the era of AIDS. In fact, "Being Boring" belongs to a sort of thematic trilogy relating to a friend of Neil Tennant's who died of AIDS, the first song "It Couldn't Happen Here" relating to the friend's belief that the HIV/AIDS epidemic wouldn't hit Britain, the final B-side "Your Funny Uncle" relating the funeral. It's the sign of a great work of art that it can also speak beyond whatever circumstances initially inspired it.

This Bloomberg article certainly caught my attention. While I'm inclined to think that the Icelandic government should do things that the Icelandic people/electorate want, I'm also inclined to agree with the commentators who say that this sort of intervention won't do much for the economy. Call it a good idea at a bad time, perhaps?

Singer-songwriter Björk Gudmundsdottir is spearheading a push that one poll shows is backed by 85 percent of Icelanders to put foreign energy takeovers to referenda if enough people oppose the deals.

The popular movement would block an acquisition by Canada’s Magma Energy Corp. of geothermal power generator HS Orka hf, which was approved by a parliamentary commission on March 22. More than 18,100 Icelanders have signed a petition demanding the deal be reversed, about half the number Premier Johanna Sigurdardottir has said should be enough to hold a referendum.

A July 21-28 Capacent Gallup poll of 1,200 voters showed 85 percent “would like to regain the rights to their energy source,” Björk, 44, said in an e-mailed reply to questions. “Why not let the people of Iceland decide? We are asking the government to stop the sale and organize a national referendum on how Icelanders feel about whether access to their energy sources should be privatized or not.”

“A referendum on a particular private contract isn’t good politics,” said Gunnar Helgi Kristinsson, a professor of political science at the University of Iceland. “If the government wants to hold a referendum, it would have to pose a general question to the public, such as whether energy companies should be privately or publicly held.”

[B]locking foreign ownership of natural resources will hurt foreign investment in one of Iceland’s most attractive industries, said Bjorn Thor Arnarson, head economist with the Chamber of Commerce. Iceland is “trailing far behind other countries” in luring foreign investors, who may back away in coming years “because they are scared politicians will meddle,” he said in an interview.

Foreign direct investment in Iceland fell by more than 70 percent between 2006 and 2008, the central bank says, largely due to the completion of an aluminum smelter by Alcoa Inc., which began operations in April 2007. Century Aluminum completed expanding a smelter in October 2006.

“International giants” like Alcoa get a discount on energy prices while local greenhouses have to pay in full,” said Björk, referring to a government price discount extended to large enterprises in return for guarantees to purchase a specified amount of power. “Instead of harnessing all of Iceland’s energy for huge industrial-age dinosaurs, we could invent and develop more sustainable options.”

I've a post up at Demography Matters that draws from Paul Kagame's recent reelection in Rwanda to examine how, in the densely populated African Great Lakes area of East Africa, colonial borders and post-colonial stupidities have helped create massive humanitarian crisis after humanitarian crisis. Will the circle be broken? There's some hope, at least.
Collapse