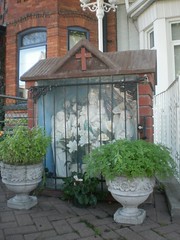 Kensington shrine
Originally uploaded by rfmcdpei
I happened upon this modest shrine, statuary protected by plastic behind iron bars in a fenced-in paved front yard, walking westwards in the west end of Kensington Market back in late June.

At Centauri Dreams, Paul Gilster raises the example of Star Wars's Tattoine, with its two suns, when he lets us know that recent research suggests that although planets could form around closely-orbiting binary stars, their lifespan may be quite limited.

Imagine two stars similar to the Sun in size and about as old as the Sun when life first evolved on the Earth. They’re possessed of strong magnetic fields and giant spots, the result of their fast spin, and the magnetic fields, in turn, drive powerful stellar winds that slow the stars and pull them closer together over time. Now things get tricky, for the new work suggests that the gravitational influences of the stellar pair continually change as the stars approach each other, causing planets and other objects circling the stars to experience collisions.

“These kinds of systems paint a picture of the late stages in the lives of planetary systems. And it’s a future that’s messy and violent.”

Indeed. And the evidence from [NASA's Spitzer space telescope] seems tight. The instrument can see the glow of hot dusky disks around three tight binary systems matching this description. The thinking is that the dust found here would normally have dissipated from stars at this level of maturity. Something, in other words, is causing fresh dust to be created, implying a chaotic process. Planetary collisions are the most likely candidate.

Via MacLean's Aaron Wherry I found Alex Himelfarb's essay. He makes points that I've heard made before, but he expresses them very well indeed.

Neo-conservatives have long railed against the so-called “nanny state”, though in country after country, time and again, they kept losing, at least until recently. The globalized, hyper-competitive economy, however, has given the critics new life. And when economic hard times hit, they almost invariably play to our anxieties to convince us that we have no choice but to reduce the size of the state and cut or dismantle our health and social programs.

In the seventies and again in the nineties, this became the hit song with its predictable lyrics: we cannot afford the welfare state; it stifles initiative; it leads to uncompetitive tax rates; it justifies big government and threatens our freedoms. How galling must be the consistently high performing and robust economies of northern Europe with their high rates of taxation and generous social policies which continue to yield an enviable standard of living and quality of life. Predictably, right-wing commentators are tripping over each other to argue that the Greek meltdown proves that the welfare state is doomed, that Europe has got it all wrong.

In Canada, our current fiscal challenges and the pressures of an aging population have also given new energy to those same neo-conservative views. These critics invariably talk only about the costs of our health and social programs, never the benefits. But Canadians have consistently resisted deep cuts to these services. They understand that medicare and our safety net have helped contain the worst excesses of inequality and reduced poverty among the elderly, and that they are essential to equality of opportunity and to a healthy, mobile, educated labour force. Calling this the “nanny state” doesn’t change the fact that Canada has, until recently, been near or at the top of almost any quality of life index, not in spite of but rather in large measure because of our medicare and social programs.

Canada’s federal system poses some particular challenges but it also gives us a leg up as we have learned a thing or two about how to balance solidarity and flexibility and how to deal with inequality of regions which share a common currency. For us, just as for the Europeans, a commitment to social programs requires a commitment to their reform. Inattention in these changing times will simply mean further erosion and fewer options for future generations. We won’t find the answers in ideology, but rather in the renewal of evidence-based social policy, in intergovernmental collaboration, and in the engagement of citizens, of civil society, in the moral choices before us, including which risks and costs we handle on our own and which we share.

How about the rise of the security state? Again globalization and the asymmetrical threats of terrorism have given new energy to longstanding conservative views that the state’s overriding if not only role is the protection of citizens from external threats and internal wrong doing. And especially since 9/11, we have seen the significant expansion of our military and security and intelligence apparatus . In parallel, we see the increasing use of the criminal law and punitive sanctions, the tough on crime agenda. Here too ideology obscures real discussion and makes good policy, policy that works, less likely.

Oh dear. Should we fear for Greenland's environmental and political future, now?

Cairn Energy has confirmed that it has discovered gas and oil-bearing sands off the coast of Greenland in a move that will heighten fears of environmental campaigners that the Arctic is set to become the scene of the world's last great dash for oil.

Greenpeace's ship Esperanza is already in the area, protesting against the actions of Cairn Energy, the first company permitted to drill for oil in the sensitive environment. Earlier this week it was challenged by a Danish warship whose captain is enforcing a 500-metre exclusion zone around the two wells.

Environmental campaigners fear that drilling in the previously untouched Arctic area raises the risk of an environmental disaster on the scale of the Deepwater Horizon spill in the Gulf of Mexico. The oil industry, however, will welcome Cairn Energy's announcement as confirming their suspicions that the Arctic harbours one of the world's last remaining major reserves of oil.

In a statement accompanying its half-year results, Cairn Energy said one of its two exploration wells in Baffin Bay, which is of a similar scale to the North Sea, has found "gas in thin sands" which "is indicative of an active hydrocarbon system". The well in question – T8-1 – has not yet reached its target depth. Cairn Energy has plans for four wells in its current drilling programme. The company is also carrying out 10,000 kilometres-worth of seismic surveying.

Will, Claus? For different reasons, this Universe Today article (found via 80 Beats) may appeal to each of you.

It’s something like the movie “Astronaut Farmer,” but this is for real. And it’s in Danish. Copenhagen Suborbitals, headed by Kristian von Bengtson and Peter Madsen, hope to launch the world’s first amateur-built rocket for human space travel. As of this writing, the launch countdown clock on the Copenhagen Suborbitals’ website reads 7 days and 12 hours, which would put the launch on August 30 at about 1300 GMT. This upcoming flight will be an unmanned test flight, but if all goes well, Madsen hopes to be inside the single-passenger capsule named Tycho Brahe for a manned flight in the near future. They have a sea-launch site on the Baltic Sea near Bornholm, Denmark, and their HEAT 1-X rocket is ready to go.

The team has been building their rocket since about 2004. Copenhagen Suborbitals is a non-profit endeavor, based entirely on sponsors and volunteers. Their mission: launch a human being into space. If they are successful, Denmark would become only the fourth nation to send a human into space. But this project is completely private – no national funds have been used. “We are working fulltime to develop a series of suborbital space vehicles – designed to pave the way for manned space flight on a micro size spacecraft,” said Madsen and von Bengtson on their website.

The Hybrid Exo Atmospheric Transporter or HEAT, is their booster rocket. It stands about 9 meters high, and it is a real scale rocket with a 640 mm diameter tube and uses liquid oxygen (LOX) for fuel. The HEAT booster will burn for about 60 seconds, providing 40kN of thrust, resulting in less than 3-g making the trip feasible for humans to endure in an upright position.

The booster was successfully test-fired in February and May 2010. Copenhagen Suborbitals has also built three other rockets and successfully tested and flown them, including a small unmanned sounding rocket, named Hybrid Atmospheric Test Vehicle or HATV and smaller versions of the HEAT rocket.

If accurate--there's at least one Latin Americanist reading this who can confirm--this New York Times article suggests nothing so much as a breakdown of Venezuelan society: a murder rate surpassing the Colombian, the South African, even the Iraqi has to be symptomatic of some wider issue. Certainly the impact of this crime on the relatively deprived people who can't really insulate themselves from its effect has to weigh highly negatively on the nominal beneficiaries of Chavez' regime.

In Iraq, a country with about the same population as Venezuela, there were 4,644 civilian deaths from violence in 2009, according to Iraq Body Count; in Venezuela that year, the number of murders climbed above 16,000.

Venezuela is struggling with a decade-long surge in homicides, with about 118,541 since President Hugo Chávez took office in 1999, according to the Venezuelan Violence Observatory, a group that compiles figures based on police files. (The government has stopped publicly releasing its own detailed homicide statistics, but has not disputed the group’s numbers, and news reports citing unreleased government figures suggest human rights groups may actually be undercounting murders).

There have been 43,792 homicides in Venezuela since 2007, according to the violence observatory, compared with about 28,000 deaths from drug-related violence in Mexico since that country’s assault on cartels began in late 2006.

Caracas itself is almost unrivaled among large cities in the Americas for its homicide rate, which currently stands at around 200 per 100,000 inhabitants, according to Roberto Briceño-León, the sociologist at the Central University of Venezuela who directs the violence observatory.

That compares with recent measures of 22.7 per 100,000 people in Bogotá, Colombia’s capital, and 14 per 100,000 in São Paulo, Brazil’s largest city. As Mr. Chávez’s government often points out, Venezuela’s crime problem did not emerge overnight, and the concern over murders preceded his rise to power.

The politicization of the judiciary, along with the disemployment and/or emigration of many of the legal system's professionals, is cited as one reason for the surge, along with long-standing police ineffectiveness and cus in resources to anti-Chavez states.
Collapse