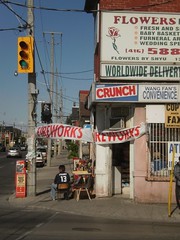 Fireworks!
Originally uploaded by rfmcdpei
One thing that I love about Ontario is that, unlike Prince Edward Island, on special holidays like Victoria Day and Canada Day you can buy explosives--well, fireworks--legally. I always look forward to the banners outside this, my local convenience store.

Writing in the National Post, Megan O'Toole writes that Toronto's incumbent mayor, David Miller, would likely win if he ran again (which he said he wouldn't, but never mind). Why?

Conducted on behalf of the National Post, Global Television and Newstalk 1010 from Friday to Sunday, the poll shows the power of incumbency, experts say, but also highlights a void on the left.

“The flag carrier for the left, or the progressive side, of the municipal agenda in the mayoralty race has not been particularly robust,” said Myer Siemiatycki, an expert in municipal politics at Ryerson University.

Recent poll numbers show Rob Ford — a right-winger running on promises to reduce wasteful spending at City Hall — has taken an 11-point lead in the mayoral race, with 32% support.

Mr. Miller announced last year that he would not seek re-election. His right-hand man, Joe Pantalone, entered the race but has failed to pick up steam as an alternative for left-leaning voters. In recent days, speculation on the left side of the spectrum has focused on a potential reversal by Mr. Miller or a late entry by Councillor Adam Vaughan; both declined to comment yesterday.

If Mr. Miller did enter the race, Ipsos pollster John Wright said, he would win “handily,” likely gaining support at the expense of George Smitherman and in some suburban areas, Mr. Ford.

“It appears that a lot of people would rather have what they know than what they don’t,” Mr. Wright said.

She notes in a separate post that Rob Ford, the front-runner, draws his support from a high degree of geographic polarization.

The Ipsos Reid survey conducted for the National Post, Global Television and Newstalk 1010 over the weekend shows 27% of Torontonians think Mr. Ford, if elected, would do the best job of governing the city. George Smitherman came in second at 19%.

Mr. Ford also edged out Mr. Smitherman as the most divisive candidate on the ballot; 24% of Torontonians say they would never vote for Mr. Ford, compared with 22% who say the same about Mr. Smitherman.

Mr. Ford has been riding a wave of taxpayer anger in the suburbs, where voters are eager for a candidate who will clamp down on city hall spending, Ipsos pollster John Wright noted. While Mr. Ford is ahead of Mr. Smitherman in the overall race by 11 points, his lead is significantly higher in the suburbs — in Etobicoke, for instance, Mr. Ford has a 35-point lead. And while about a third of downtown Torontonians say they would never vote for Mr. Ford, suburban voters appear more likely to rule out Mr. Smitherman.

“This is the suburbs candidate versus the city candidate, and suburbs are winning,” Mr. Wright said. “[T]here is great antipathy in the downtown core toward Rob Ford getting in, but on the other hand there are a whole lot of people who would say, well, if he’s going to get in, it sounds like he’s going to shake things up.”

lemurbouy suggests that Toronto might have Nigerian-style politics, in that the office of the presidency is held, in alternating terms, by politicians from the north then the south. With downtowner Miller succeeding suburban Lastman and Miller himself quite possibly to be succeeded by suburban Ford, he might not be so far off the mark.

Closing down the Department of Veterans Affairs offices in Charlottetown certainly would. If the numbers given by the mayor are correct, something like 2% of PEI's population would be lacking in jobs--on Prince Edward Island, at least. This speaks to the extreme vulnerability of the Island economy, sadly.

Packing the federal Department of Veterans Affairs back to Ottawa with its 1,200 high-paying jobs would devastate the P.E.I. economy, says Charlottetown's mayor.

Clifford Lee was responding to the suggestion of a veteran at a news conference in Ottawa frustrated by DVA's bureaucracy. Ron Cundell, a former sergeant and veteran of the 1991 Gulf War, said the department would be better supervised in Ottawa.

The headquarters for the Department of Veterans Affairs was moved to Charlottetown 30 years ago as part of a plan to distribute the economic benefits of the federal government across the country.

Cundell's suggestion that those economic benefits should be moved back to Ottawa had Island politicians scrambling to defend Charlottetown's largest employer.

"Anyone who lives here or does business here is fully aware of the significance of the department," said Charlottetown MP Shawn Murphy.

"They contribute not only financially but in a lot of other ways to the community."

I'd been thinking of the parallels between the stranded miners in Chile and present (or future) isolated astronauts.

Chilean health officials are seeking advice from Nasa on how the 33 miners trapped underground can remain sane and healthy while rescue efforts continue.

The men appear to be healthy and optimistic but are likely to be confined in a tiny shelter 688 metres underground for up to four months while relief crews bore an extraction shaft.

According to officials at the Chilean health ministry, conditions in the chamber are similar to those faced by submarine crews or astronauts on the international space station.

Dr Lesley Peekman-Kerr, a specialist in psychological trauma, said the Chilean rescue workers appeared to be doing all they could to support the men.

"They are ensuring regular contact with loved ones and providing information to the miners."

But Peekman-Kerr warned that the emergency teams would have to break the news to the men – as gently as possible – that it would take a long time for them to be rescued.

"The rescuers need to get the men into the frame of mind that it's going to be protracted. If they tell the trapped men something false in an effort to comfort them, then trust will be broken and it is vital that the men trust completely what they're being told," she said.

Peekman-Kerr said it was important to establish a routine and to break time into chunks – for example, breakfast, lunch and dinner. Other activities to help fill the time could include games, exercises, cleaning and contact with relatives on the surface.

"When your mind is focused and occupied there is a feedback loop that calms our mental systems," she said, adding that exercise was key as it used excess energy, preventing it from being transformed into aggression.

Peekman-Kerr said that she would expect the rescue teams to draw up a profile for each man underground in an attempt to determine their strengths and to see what might cause problems.

MacLean's Isabel Vincent writes about how Brazil's Lula has surprised almost everyone in being a really, really good leader for Brazil. Under his guidance, Brazil has become a fairer, more democratic, and more influential country.

Last month, the nonagenarian Brazilian socialite Lily Marinho hosted an extraordinary event at her Rio de Janeiro mansion—a political endorsement for the ruling Workers’ Party presidential candidate Dilma Rousseff. Over champagne, salmon remoulade and passion fruit crepes, Marinho introduced Rousseff as “Lady Democracy” to the 40 powerful women assembled at her grand colonial home. When a reporter asked her if she would be hosting luncheons for the eight other candidates, the bejewelled Marinho shot back from her wheelchair, “No, just for her!”

While Rousseff, the 62-year-old frontrunner in Brazil’s October vote, basked in the adulation, Brazil’s president and Rousseff’s former boss, Luis Inácio Lula da Silva, 64, must have been savouring the turn of events. After all, when he first took office in 2003, members of Marinho’s rareified circle worried that he would take Latin America’s biggest economy down the road to ruin, turning the country into a Marxist banana republic.

In fact, before his death in 2003, media baron Roberto Marinho—Lily’s husband—worked actively against Lula. During Lula’s first presidential bid in 1989, Marinho ensured that his Globo TV empire supported Lula’s principal opponent, Fernando Collor de Mello, the right-wing governor of Alagoas state, whose short-lived rule of Brazil proved a major disaster. His economic reforms went nowhere and he resigned amid accusations of influence-peddling and corruption in 1992. “Stop for a minute and look back to 2002,” Rousseff told the Rio socialites at the luncheon. “Understand just how different this country has become. Twenty-four million Brazilians have left poverty and 31 million others have entered the middle class. The country grew and companies grew.”

Indeed, Lula has poured billions into social programs to alleviate hunger and improve education. The efforts seem to be paying off. Brazil’s income gap—one of the world’s biggest—is shrinking while the bottom 10 per cent of the population saw their income rise by nearly 60 per cent between 2001 and 2006.

In March, he launched the second phase of an investment scheme that will pump more than US$800 billion into everything from roads to housing to renewable energy. Even Lula’s former rival, Collor, now a senator, recently described Lula as “the best president Brazil ever had.”