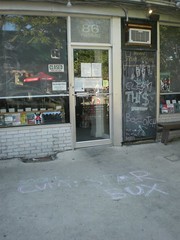 The Former This Ain't the Rosedale Library
Originally uploaded by rfmcdpei
This Ain't the Rosedale Library, during its three decades of existence one of the premiere independent bookstores of Toronto--indeed, arguably the world--came to an end this June when the bailiff changed the locks on the door. Once located at Church and Wellesley, in the past year it had moved to Kensington Market to escape rising rents, but here, it seems, the rent-to-income ratio was still too high. The closure saddens me: for any number of reasons, it was one of my favourite bookstores, ever. 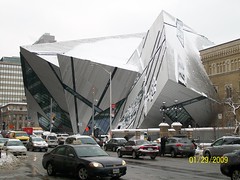 Michael Lee-Chin Crystal (1)
Originally uploaded by rfmcdpei
Pictured here in winter, the Royal Ontario Museum's Michael Lee-Chin Crystal, a very striking post-modernist addition to a fairly classical museum, that has inspired a lot of public reaction, most of its highly polarized and much substantially negative. In an interesting Torontoist article, Michael Boughn defends the crystal. First comparing the controversy over Daniel Libeskind's Crystal addition to the ROM with the general support for Frank Gehry's renovation of the Art Gallery of Ontario, he argues that Libeskind's design deconstructs the museum nicely.

[T]he museum became material proof of the superiority of European culture, its treasure house, at the moment it literally possessed the world, contained it. The new architectures of display presented these materials flayed, pinned, and lined up in orderly presentations in rectilinear spaces that encoded significances beyond the mere visible objects. The physical orders of the halls and the cases they contained revealed the order of nature, the order of human progress, the order of knowledge that was fundamental to the emerging culture of modernity. Grouping artifacts according to nations and national schools displayed not only the artifacts, but "nation-ness" itself, as if it were "natural." Displaying artifacts in terms of the progress of humanity, from primitive to civilized, naturalized "progress" as a given fact—as well as located its pinnacle in the culture that collected and interpreted the artifacts and created the display before which the spectator stood.

One thing Libeskind’s building does, then, and does with real zest, is explode out of the smugness of this cultural configuration. It explodes onto Bloor Street—talk about responding to your context. Many people express discomfort with this architectural assertion, but perhaps they are supposed to feel discomfort. At the very least it disrupts—I would say enlivens—what always seemed one of the most pretentious, undistinguished, nineteenth-century colonial corners in Toronto. Between the old Anglican church, the "grand" Hyatt hotel, the neo-classical Department of Household Sciences (where women in the University of Toronto learned how to clarify soup and other subjects "related to their role"—now an upscale clothing store), and the undistinguished beaux-arts façade of the museum, Bloor and Avenue roads exuded the colonial complacency associated with Orange parades and dry Sundays.

Throughout his renovation, Libeskind stripped off the surfaces that hid the museum’s history beneath the appearance of some fictional, unassailable totality. The curiosity cabinets are one such gesture. Another is the revelation of the seams where various other renovations joined the original building over the years. The illusion of a single, seamless, monumental structure is gone. More important, however, is the way he explodes the complacency of the interior spaces. Michel Serres, the French philosopher of science, has suggested that we need to start thinking of knowledge in terms of sacks rather than boxes. Libeskind may not go quite that far, but there is nary a box to be found in his new spaces.

Further down, commenter aleksey has a somewhat different take, arguing that the Crystal is good not great architecture, that it was certainly better than the other proposals, and that Toronto will get used to it, perhaps one day building up a tolerance for great architecture.

Me? I visited the ROM with family on Saturday, and I think that the crystal has grown on me. The crystal provides a spectacular background for the fossil displays on the second floor, especially the dinosaurs, while the windows allow for interesting interactions between the museum interior and the exterior streetscape. I think that, after years, I come down firmly on the side of "like."

Yes, that's the gist of this Globe and Mail article. I myself agree that the operation of the census-taker and the whole context of census-taking is entirely like that of waterboarding and torture, save for the many, many, many ways in which they're different. WTF?

Lawrie McFarlane was one of several witnesses called before a Commons committee Friday, including a farmer and a Calgary talk-radio show host, who were sympathetic to the Harper government’s decision to scrap the compulsory long-form census.

They were outnumbered by economists, researchers and social policy groups, invited on the recommendation of opposition parties, who decried the move and said a replacement voluntary survey will yield a skewed demographic picture of Canada.

Mr. McFarlane, who also once served as chief executive officer of a Saskatchewan regional health authority, said Canadians lie on the census. He retold a story, cited by the Prime Minister’s Office earlier this summer, of how 21,000 Canadians registered Jedi as their religion in the 2001 census.

He said it’s understandable Canadians lie on especially sensitive census questions, such as mental health, child rearing habits or the amount of their savings.

“What you can guarantee by compulsion is a response: You put a gun to somebody’s head, they’re going to say something,” Mr. McFarlane told the House of Commons industry committee.

“It's almost like the argument for water boarding: if you water board enough people, they will tell you something,” Mr. McFarlane said.

The Italy-Libya relationship, as Bloomberg observes, combines bizarre stunts with economically lucrative and mutually profitable exchanges. The --shall we say--personalities of Qaddafi and Berlusconi contribute a lot to this, of course.

Libyan leader Muammar Qaddafi urged hundreds of young women in Rome to convert to Islam as he marked the second anniversary of a “friendship” treaty with Italy that is paying dividends for Italian companies including Eni SpA and Finmeccanica SpA.

Before seeing Italian Prime Minister Silvio Berlusconi, Qaddafi met 200 women today who were paid to attend and listen to Qaddafi’s lecture on Islam. He told 500 women last night that Islam should become the religion of all of Europe, triggering criticism from both Berlusconi allies and opponents.

Qaddafi’s visit was an “embarrassment,” said Carmelo Briguglio, a lawmaker with the Future and Freedom for Italy party, a former Berlusconi ally. Members of the opposition Italy Values party protested outside the site where Berlusconi met with the Libyan leader in a Bedouin tent erected for the visit.

Qaddafi was due to entertain his Italian hosts with an equestrian show featuring 30 berber horses flown to Rome with their riders for the event.

Behind the theatrics, there was business as to be done. The two year-old treaty, which served as Italy’s apology for 30- years of colonial rule, intensified commercial ties between the two countries. The agreement included a pledge by the Italian government to spend 5 billion euros ($6.3 billion) to build a highway across Libya and has led to contracts for Italian companies and more Libyan investment in Italy.

Italy is Libya’s biggest trading partner and commercial ties between have intensified since Qaddafi pledged to steer 90 percent of his business to Italy when he signed the treaty. Berlusconi has emerged as the Libyan leader’s closest European ally, while his political rivals say he’s ignoring Qaddafi’s human rights record and that Libya is gaining too big a footprint in the Italian economy.

Walking south from St. Clair West towards home after I bought Shakespeare his $C22.42 bag of dry cat food at a conveniently-located veterinarian's office, I found myself walking down a residential street where children were cavorting. On my side of the street, one boy, 10 or so; on the other side of the street, on the patio, a boy and a girl. They were laughing as they spoke across the street.

- Even though she doesn't have a girlfriend, she told me that she wanted me to pretend to be her boyfriend.

- Total fail! the boy on my side yelled.

- I told her I didn't like being used.
Collapse