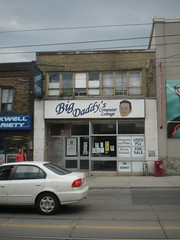 Big Daddy's Computer Lounge, 274 Coxwell Avenue
Originally uploaded by rfmcdpei
Something about the external appearance of this east-end Toronto Internet cafe, located at 274 Coxwell Avenue, makes me think of the past, of avenues not taken. Maybe it's the dated signage; maybe it's the knowledge that the Internet cafe was likely a passing phase, midway between the isolation of the desktop at home and computer labs and the relative freedom offered my laptops and WiFi and smartphones.

This news item is interesting, if not that true to me. I wonder if this phenomenon works in other multilingual societies, in the United States for people fluent in English and Spanish, say, or in Belgium for people who speak French and Dutch. On balance, I suspect that it would be at play in Belgium and not the United States, if for no other reason than that Dutch and French are each dominant and legally established languages in their own territories, while in the United States Spanish lacks much by the way of official status, or high social status.

If you speak both French and English, you’re likely to earn more than your unilingual counterparts, according to a new study by researchers from the University of Guelph. And depending on where you work in Canada, you don’t necessarily have to use a second language on the job to reap the financial rewards; merely knowing it can translate into a higher income.

Economics professors Louis Christofides and Robert Swidinsky found that men in Quebec who can speak both official languages earn an average income 7 per cent higher than those who speak only French, and bilingual women in Quebec earn 8 per cent more.

Meanwhile, in the rest of Canada, men who know both languages earn an average income 3.8 per cent higher than those who know English only. Bilingual women earn 6.6 per cent more.

But the researchers found that the rewards for actually using both languages on the job differ based on where in the country you work.

In Quebec, men who use their second language frequently at work can earn an additional 14 per cent (on top of the 3.8 per cent) than those who speak only French, and women can earn an additional 7 per cent. In the rest of Canada, however, it makes no significant difference whether English-speaking men and women use French at work or simply know the language; the financial benefits are about the same.

Dr. Christofides, a professor emeritus at the University of Guelph and also a dean of the faculty of economics and management at the University of Cyprus, says employers may be willing to pay workers extra simply for knowing a second language because bilingualism is associated with other attributes, such as a proclivity for education, cultural sensitivity or sophistication.

“They would see a [bilingual] person who is ‘able’ or ‘sensitive’ or ‘has good social skills,’ ” he says. And as indicated by the lack of difference between the financial benefits of using and knowing French in English-speaking provinces, “the employer doesn’t care that this person doesn’t speak French as well. He has no use for it. But when ... you use this marker that the individual is bilingual, this marker is going to pick up all these extra qualities that the individual has.”

In Quebec, however, the substantial financial reward for actually using English on the job reflects the demand for English in the marketplace, he says, particularly in the province’s major cities. Moreover, jobs in Quebec that involve international business also value English.